Holy Crosses (and Other Boomerangs) 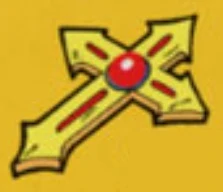 The cross is probably one of the most, if not the most, iconic weapons within the Castlevania series. It has been featured in practically every game in the series since the very first title, Castlevania, came out in 1986. It stands along side the Vampire Killer, the Belmont family whip, as an expected piece of gear every vampire hunter in the series is supposed to wield.

What makes the cross so iconic? In part its probably the goofiness of it. While the whip, the axe, and the dagger all function as you'd expect as weapons, the cross is something else altogether. A holy item that you throw like a boomerang, traveling out before coming back to you, is a silly concept when you think of it, but so cool when done in practice. It's unlike any item of its era, making it so perfectly an identifying symbol of the series.

Yes, there have been other boomerangs in the series, but the cross stands in a class by itself. Powerful, effective, and oh so cool, it just doesn't feel like a proper Castlevania game without this item. 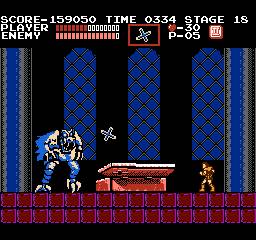 First appearing in the original Castlevania, the cross is a standard mainstay for the series. In most games it's function follows that of its first appearance: the cross will fly out in a straight line, hitting any targets in its path (sometimes twice if the target is big enough, or if it moves backwards). Once the cross hits a predetermined distance (usually the edge of the screen) it then flies back, hitting all enemies that cross its path again. This makes it a strong, multi-hit weapon that can deal a ton of damage, sometimes melting bosses even.

In rare instances the cross doesn't follow this behavior. In Haunted Castle, the cross only flies outwards in a straight line, not returning to the player after. In Castlevania: Harmony of Dissonance the cross only travels half the length of the screen, unless the player has the Nova Ring equipped, doubling its distance.

And then, with Castlevania: Symphony of the Night the series introduced the Grand Cross. Prior to this game, hero Richter Belmont could perform an item cross, sending cross spiraling out from him in a rotating pattern. Instead of that kind of "crash" though, or even a normal cross usage, Symphony gave Alucard a Grand Cross (although still referred to as just a "cross" in this game). Standing still, Alucard would become engulfed in a beam of light, giant crosses spiraling upwards around him, damaging all enemies on screen. It was a powerful attack, although it did use up a fair number of hearts.

From this game forward, the Grand Cross became a standard item crash for the base-level cross. Generally the item crash would follow the pattern of the Symphony cross: a large beam would engulf the hero, followed by crosses spiraling around them. Castlevania: Aria of Sorrow introduced a version of the Grand Cross performed by Julius Belmont which created a flaming cross that rose from his body. This version was mimicked in Castlevania: Dawn of Sorrow (naturally) as well as by Richter as his cross item crash in Castlevania: Portrait of Ruin. It also was stylistically similar to the Blood Cross crash performed in Castlevania: Harmony of Despair. 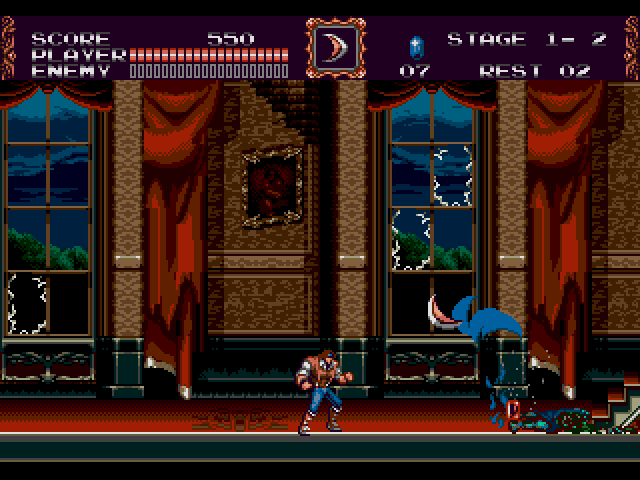 First introduced in Haunted Castle, the boomerang is another weapon that has occurred, infrequently, throughout the series. Its first incarnation made it functionally similar to the dagger, flaying out linearly, and slowly, but not coming back to the hero (technically making not a real boomerang despite its shape).

It was Castlevania: Bloodlines that introduced the standard behavior for the boomerang: the item would travel out a distance forward, upwards at a slight angle, before the weapon would fly back, continuing along that slight, upward angle. This was then improved by the regular and fire boomerangs featured in Symphony of the Night, one-time-use items that would fly out, and then back at an upward angle, before finishing their overhead arc as they crossed downwards behind Alucard.

This arc was the behavior for Johnathan Morris's boomerang sub-weapon in Portrait of Ruin, both in its normal and mastered forms. it was also the behavior of the boomerang-like glyph, Redire, used by Shanoa in Castlevania: Order of Ecclesia.

Curiously, when Dawn of Sorrow introduced its own boomerang, that weapon flew in forward, without returning, much like the boomerang in Haunted Castle. This was likely in reference to that game. It's also the arc for the chakram in that game.

Notably, a chakram also was featured in Symphony of the Night, although this item flew in an arc and actually returned directly to Alucard so it could be thrown again (which is how you'd expect a normal boomerang to function in a video game). He could also equip two chakrams at the same time, allowing him to throw two of these at once.