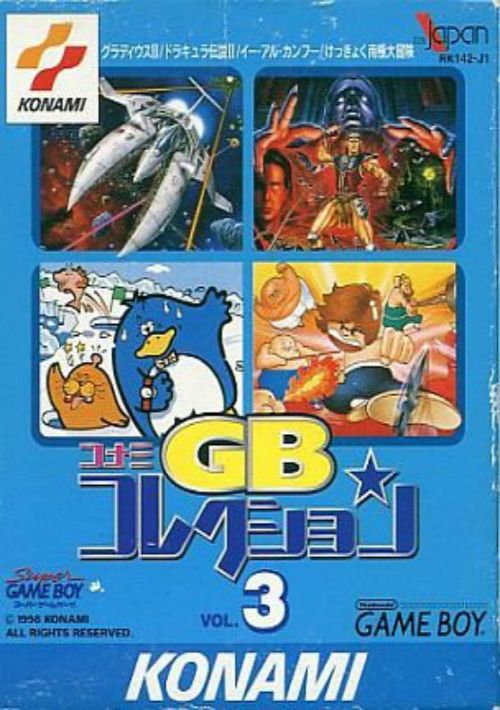 In 1997 and 1998 Konami release for Game Boy collections, the Konami GB Collection series, in Japan. These carts were collections of various Game Boy games, packed together in a cost-saving format that allowed Konami to easily recycle old roms they had and put them out again, grabbing a little extra Yen off the Japanese public. Considering there were four of these carts made, that plan was clearly successful. So successful, in fact, that a couple of years later Game Boy Color editions were eventually released in Europe as well (which we'll cover separately).

We've already gone over the first of the four carts, the Konami GB Collection, Vol. 1, and though we aren't going to touch upon the Japanese Volume 2, as it doesn't have any game relevant to the focus of a Castlevania site (as that cart covered Pop n' TwinBee, Mystical Ninja Starring Goemon, Motocross Maniacs, and Loco-Motion), the third volume is relevant to us due to the inclusion of one game: Castlevania II: Belmont's Revenge.

As this is another cart in the Konami GB Collection series, the same basic rules apply for the production quality of the cart. It's four games packed together -- in this case Castlevania II: Belmont's Revenge along with Gradius II: The Return of the Hero (released as Gradius: The Interstellar Assault in the U.S.), Yie Ar Kung-Fu, and Kekkyoku Nankyoku Daiboken (released as Antarctic Adventure in the U.S.) -- along with basic training materials (in place of instruction booklets for each game) and Super Game Boy backgrounds (if used in that cart system).

As far as the collection is concerned the highlight of this cart (whether you're a Castlevania fan or not) is Castlevania II: Belmont's Revenge. This second "Adventure" game in the series is a real gem, a good enough adventure that it doesn't just outshine the other games in this collection but also most of the output on the Game Boy in general. It's one of the best of the classic-style Castlevania games and a worthy addition to any Game Boy collection. 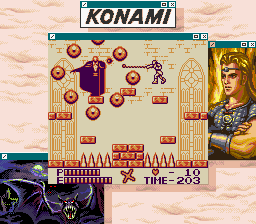 The only other really "good" game in the series in Gradius II. As far as Game Boy shooters are concerned, this game is pretty solid. The hardware for the system wasn't that strong, but this game is able to put out decent waves of enemies, and their bullets, and then screen-filling bosses, all without throwing a gear or showing noticeable slowdown. As far as Gradius games are concerned I found this on the easier side, largely because it does feel like the company cranked down just how much will be on the screen to accommodate the Game Boy hardware. In comparison to other Game Boy shooters, thought, it holds up reasonably well.

The other two games in the collection, though, are pretty forgettable. Antarctic Adventure is a cute, but shallow, scrolling racer. You take the little penguin, who infinitely runs into the distance, and try to get them past obstacles so they can reach the end of the track before time runs out. It's fine, but not something that instantly grabbed my attention. Meanwhile, Yie Ar Kung-Fu is just a bad game. It's a fighting game, in the genre that would eventually come to be dominated by the Street Fighter series, but it's controls are wonky and the hit boxes suck. This is a game you'll try once and then never touch again.

Really, the biggest surprise of the collection, bad as it is, is Yie Ar Kung-Fu. This is a game that was ported to a number of systems but, for all I can find out about it, never had an official Game Boy release. This seems to be a rom of a port that never came out, finally published to help clear out Konami's archive. If you absolutely have to have every Game Boy release, this is the only way to get Yie Ar Kung-Fu, so that's something I guess. Otherwise... no.

All things considered this is a slightly weaker set than the first cart. The best part of it is the Castlevania game, but in general the other titles are much more forgettable this time around, and there isn't even the barest sense of cohesion that the first collection tried for. While I appreciate Konami putting out collections of these games back in the day to help collectors flesh out their libraries, I feel like this collection needed a little more work to really make it interesting. It's fine, and a good way to get Castlevania II: Belmont's Revenge if this was all you could find back then (and you lived in Japan). For anyone now looking to grab games off the collector's market I'd give this one a pass. It's not worth the price of entry, not if you already have the Castlevania title via other carts.