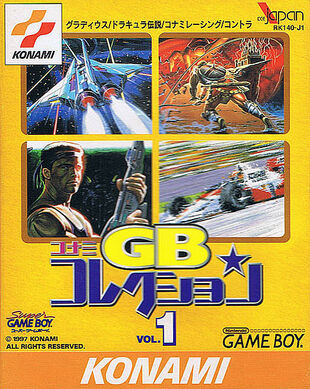 Collections of video games offer an inherent value proposition to the buyers. It gives them an opportunity to get a bunch of games, all at once, with little overhead (often the standard price of a single game). Now you can have a few games, all together, and as a bonus they only take up the space of a single cartridge in your collection. It feels like a win-win to the buyers, generally.

Of course it's also a solid value for the game companies. Once a game has been on the shelf for a little while it's price starts to go down. Retailers charge less, and only want to move their back-stock once a game has reached a certain age (and stops selling as well). The game company sees less profit as a result, but still has these games kicking around on their hard drives. Packing multiple games together allows the company to trot them out again, recoup some extra cash (as now it's a new cartridge just with familiar content), and begin the cycle a second time.

There's nothing necessarily wrong with this. Yes, its multiple games sold to the players for, basically, a discount. It's how the game company puts these collections together, though, that matters, and there is something that feels a bit bare-bones about the Konami GB Collection, Vol. 1. Originally released in Japan on the Game Boy (and then re-released later in Europe on the Game Boy Color, although we'll look at that edition separately), Vol. 1 sports four games unified by the fact that they were all from Konami and all on the Game Boy: Gradius (originally titled Nemesis), Dracula Densetsu (released as The Castlevania The Adventure), Konami Racing (originally titled F1 Spirit), and Contra (released in the U.S. as Operation C, see the Asteroid G review for more information on that game).

The first thing you'll notice going into this collection is that the four games featured here have no real relation to each other. Beyond the fact that they're all from Konami what we have is a platform action game, a platform shooter, an on-rails space shooter, and a racing game. While one could maybe see some kind of connective tissue between Castlevania, Contra, and Gradius (platforms to platform shooting to shooting), Konami Racing sticks out like a sore thumb. It feels tangential to the collection, a title packed in so the cartridge would reach "four games in one" status, but not because it was actually any good. 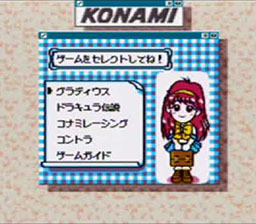 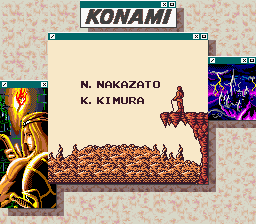 The games themselves do play great. Well, okay, they play exactly as you remember since they're Game Boy titles put out, once again, on the Game Boy. The Castlevania Adventure is just as Game Boy-chuckingly difficult here as it was originally. Operation C is a fun, light Contra game; Gradius on Game Boy feels shockingly like Gradius without nearly as much slow-down as I was expecting for so much action (although I suspect Konami toned this game down for the Game Boy). And Konami Racing is, well, a generic top-down racing game with very little frills. It really doesn't belong here.

Beyond the games themselves, this package does feature a couple of extras. The first is that it does have a full menu system, not only to select the games but also so you can view little tutorials (in plain text) on each title. This is a nice inclusion as, obviously, all four instruction booklets weren't packed in with the cart. This obviously saved Konami some money as they didn't have to do a major reprint of booklets for the game, and it is something extra to look at in the cart. These menus, it should be noted, are hosted by one of the girls from Tokimeki Memorial, a dating sim from Konami that never left Japanese shores. Tokimeki Memorial is notable for Castlevania fans because it was one of the first games eventual Castlevania series producer Koji "IGA" Igarashi worked on when he joined Konami, writing scenarios for the title.

The cart also include backgrounds for the Super Game Boy. They aren't very interesting (as you can see above), just some slapped together bits of artwork on a generic background, but at least the switch to the appropriate game depending on what you're playing. It's not much but it is something.

Despite these inclusions, though, it really doesn't feel like there was much care put into these games. It feels like a creation by committee, with some suits going, "we made these games, how can we sell them again?" What features there are certainly feel like more than you might expect from a true bargain-basement collection, but only just barely. If you lived in Japan and somehow missed out on these titles, this cartridge might have been the right way to go back in the day. I suspect, though, that even then the used game market would have made the original carts for these games cheaper than the collection (as least when it was new and on shelves). These things are something of a collector's item now, but in general it's hard to see the value in three slapped together games plus Konami Spirit.