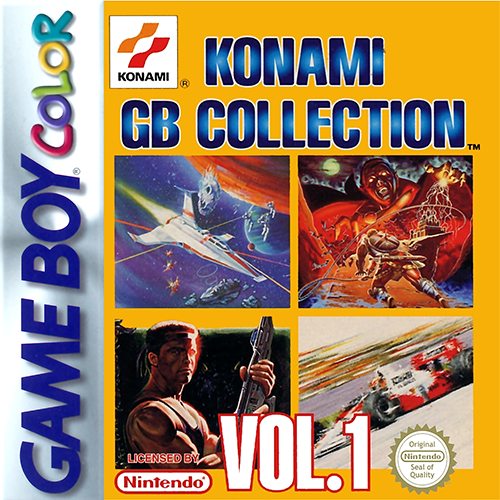 Anyone that is familiar with the Game Boy edition of the Konami GB Collection, Vol. 1 will probably feel like I'm repeating myself here, and that's fair. The Konami Game Boy Collection: Volume 1 is a release of four game -- Gradius (originally titled Nemesis in Europe), The Castlevania The Adventure, Konami Racing, and Probotector (aka Operation C, see the Asteroid G review for more information on that game) -- compiled onto a single cart. This collection was originally released in Japan on the Game Boy, but then Konami elected to re-release the collection outside of those shores... but only in Europe. And not just re-release, really, but up-port the games to the Game Boy Color.

As we've already covered the games themselves in the Game Boy review of this collection, let's actually look at how these games (and the collection as a whole) fares for the Game Boy Color translation. In short: it's not great. On paper this cartridge seems like a real win. You get four games that, in their day, were only released in monochrome, put out on a color system with a nice little bit of polish, right? How could this, in any way, be a bad thing? Well, as we'll cover, the devil is really in the details here.

Of the four games features, Gradius fares the best. The game was already a nimble and light space-shooter in its original release, and that carries over well here. The game play remains tight and responsive, making it a fun game to play. The new color graphics compliment this as they are bright and colorful with enough contrast to really make the backgrounds stand out from the sprites themselves. While it is weird to play a Gradius game where the ship is flying in low atmosphere (the sky) instead of deep space (all because putting these sprites against a black backgrounds probably would have made them too hard to see on the Game Boy), the overall impression is still one of a dazzling little Game Boy game.

Frankly, if Konami had just put a Game Boy port of Gradius out on the GBC that probably would have been great. A-plus work there, Konami, although we also wouldn't be talking about it on this site. It's the other three games that look terrible by comparison. The easiest target is Konami Racing, which is a bland F1-style racing game with bland graphics. It was boring on the original Game Boy and slapping some basic colors -- grassy greens, reds for opposing vehicles, blues for your vehicle -- doesn't change that. Boring is boring. 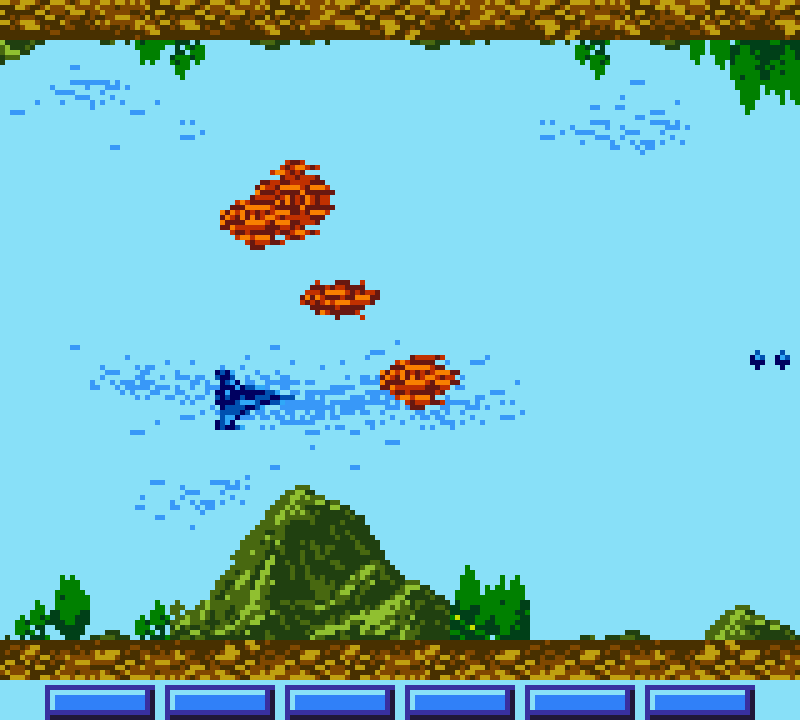 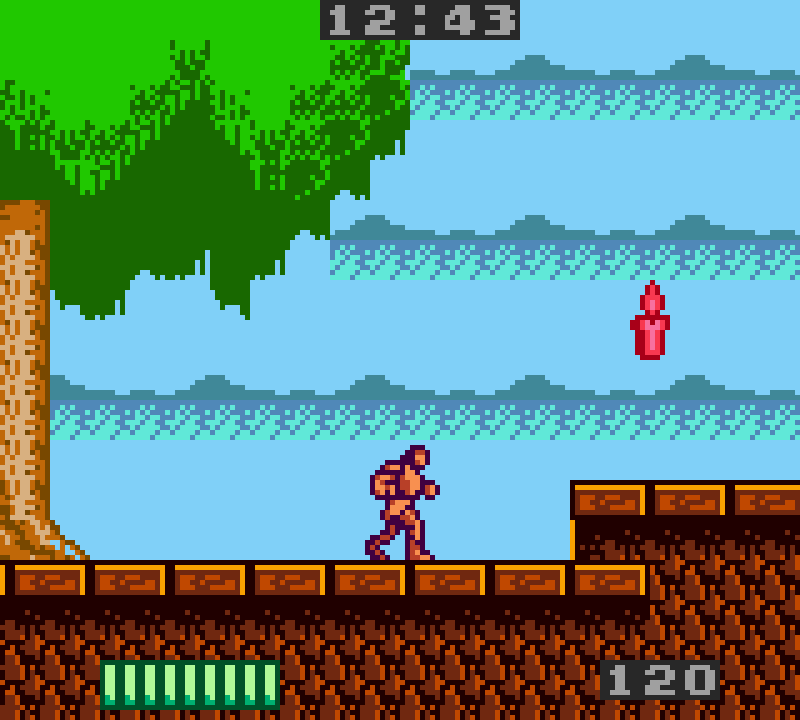 The Castlevania Adventure looks much worse than I expected. I think they were trying to give this a feel of an NES game with the color choices, especially with hero Christopher Belmont getting the drab brown makeover, but the rest of the graphics just don't hold up. It's all very basic looking, without the pop and pizazz you would want in a colorful Castlevania game of the era. It lacks life, and spark.

Probotector comes off the worst, though. I thought the original edition of the game, composed to have high-contrast on the monochrome Game Boy screen, looked great. it was a solid and playable translation of the Contra formula down to the tiny hand-held. The colorization department, though, really dropped the ball here as all the enemies are colored a lot like the backgrounds they're against, removing that level of contrast needed. Now things feel like they pop in out of nowhere and everything feels much more drab and bland.

The truth is that this feels like exactly what it says on the box: a "colorized" version of these Game Boy games. If you've ever heard about the debate over "colorizing" old movies and T.V. shows, you'll remember how much people hated the way the process removed much of the intended contrast, the feel of the black and white smoothed out by pasting color over top. This is the same issue here as the color graphics actually remove much of the nuance intended in the original monochrome graphics. As these are just basic ports with sprite colors changed, there was only so much Konami could do. It does, however, speak to the cheaply made quality of this cart.

Also highlighting that: all the bonus content from the original release is gone. The menus hosted by the Tokimeki Memorial girls are now just basic menus. All the instruction sheets are completely gone, likely due to the expense of translating it into the multiple languages that would have been needed for the EU region. And, of course, the Super Game Boy backgrounds are gone as well, as this was a GBC cart and that would have been incompatible. A lot was lost in the process of moving this collection over to the GBC, and I just don't think it was worth it. 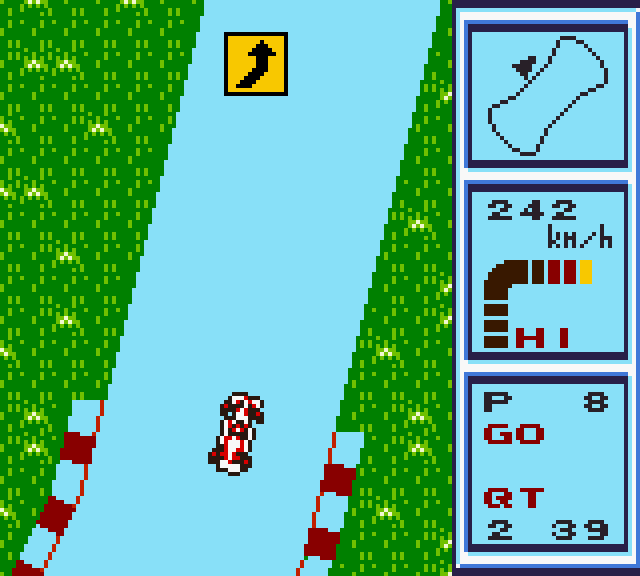 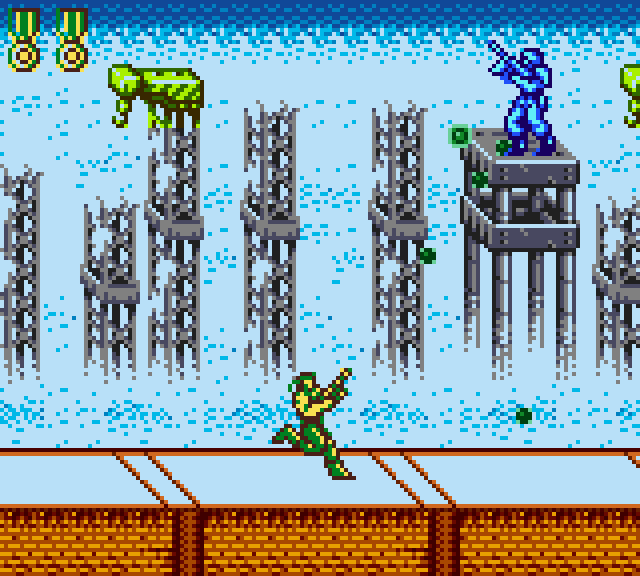 Where I could see someone, even now, maybe wanting the original game Boy cart for their collection, especially if they just liked the games and wanted a little slice of history they could play, I can't say the same thing for the GBC edition of this collection. Too much is missing, and what was added in to replace it -- thee color graphics -- is far worse by comparison. Only the hardest of hardcore collectors would need to buy this game for their collection, and even then that would only be if they were wanting a perfect EU set of games (or were doing the full international collection). For everyone else, the Game Boy Color edition of the Konami Game Boy Collection, Vol. 1 is a hard pass. Even back in the day I would have avoided this set. There are better ways to play these games.