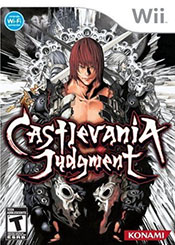 In the distant future, Galamoth (a giant, vaguely Egyptian demon found in Symphony of the Night, and prior to that, villain of the parody game Kid Dracula) is looking to finally rid the universe of his eternal foe, Dracula. To do so, he sends the Time Keeper back to kill the Dark Lord. Meanwhile, a man named Aeon gathers together heroes from across the timestream to fight the Time Keeper... but first they must fight each other to find out who is the best capable of taking on the Time Keeper and saving all of history (and, kinda ironically, saving Dracula as well).

As the last even vaguely canonical entry in the main Castlevania series, Castlevania: Judgment is an interesting title. It's a mash-up title (taking various heroes and villains from the whole series) and a fighting game (a weird hybrid of Power Stone and Smash Bros.), and a compendium of all things Castlevania:

As a mash-up the game relies heavily on Iga Kojirashi's favorite titles, Castlevania III and Rondo of Blood. It's not exactly a diverse mix, with both Simon and Trevor Belmont in the mix, but not later Belmonts or other whip wielders. Theres a lot of villain characters included -- Dracula, Death, and Carmilla among them -- but it seems almost like the bosses are too weak in comparison to where you'd expect them to be. And while I understand that Alucard is a super popular character, did we really need the complete hero cast of Castlevania III included? At least in the case of Sypha Belnades there are other Belnades relatives that could have been chosen for diversity (Carrie Fernadez or Yoko Belnades to name two).

As a Castlevania collection, the choices in Judgment are a little strange. Along with the aforementioned lack of diversity, all of the characters have gotten extensive redesigns. Alucard and Dracula at least look like their previous iterations, but Maria is creepily sexual for an adolescent girl, Sypha would look more natural in the cast of Queens Blade, and Simon (by far the worst redesign) looks like he fell out of his closet into an S&M club/Depeche Mode-fueled remake of The Birdcage (have fun looking up all those references). Considering the fact that a mash-up game should appeal to fans of the whole Castlevania series, why they felt the need to make all the characters look nothing like they would in the regular series defies explanation.

More curious is the lack of stages from actual Castlevania games. While the Clock Tower more or less makes an appearance (and the Alchemy Lab shows up in name only), there's no Grand Hallway, no classic Red Level/Chapel (just a Cathedral, which isn't the same), no proper Castle Keep (just a Throne Room which, once again, is not the same). Understandably, they don't want arenas to be too complex, but there are plenty of locations that could have been honored in one form or another while still being perfectly playable as a 3D arena.

Thankfully, on one front the game does get a little right: the soundtrack. The game features a number of remixes from the series -- "Vampire Killer", "Bloody Tears", "Beginning", and "Iron Blue Intention," to name a few -- and while being more symphonic and a tad over produced (with, at times, mildy questionable bridges), the remixes err fairly true to the original songs. They're certainly worth listening to, and help make the game at least somewhat palatable to fans of the series.

Unfortunately, where the game really falls on its face is with the controls. As a Wii game, the game tries to make use of the Wiimotes. Thus, you end up running around with the Nunchuck while making swiping motions at the screen. Maybe others have figured out how to play the game that way, but I found that the only way I could get my character to do anything useful was to waggle the controller at the screen in an increasingly furious series of spasms (the "waggle" version of button mashing). Admittedly, this is a common problem with a lot of Wii games, so it's not like Judgment is alone in being unplayable.

I do feel it's important, though, to give a bit of context. Although I'm not the best at fighting games, I can hold my own at Street Fighter II (admittedly with Chun-Li, Ryu, or E. Honda), and I'm exceedingly good at Smash Bros. While I'd never enter a tournament, I'm not a complete noob. Fighting games are not entirely outside my wheelhouse, and picking up a controller for Judgment, I would presumably feel right at home.

Sadly, even with a more standard controller (for the sake of reviewing, this author used the Game Cube controller), the game was still ridiculous to try to master. I found that while there are a number of basic moves and combos you can do, actually pulling them off before the computer destroys you with it's own moves proved less than feasable. I ended up button mashing anyway, pounding a few simple moves or random attacks just to get through the stages. Most of the time I'd end up at a point where some character would prove too much for my inability to figure out the obtuse rules of the controls, and I'd have to restart with a different character just to see if anyone else was more playable.

Now, don't get me wrong, I appreciate the fact that Konami was trying to do something different with the Castlevania series. It's not as if anyone can complain that Judgment is too much like other games that have come before -- there are no official games in the series like Judgment. So while the game gets credit for being different, it doesn't get credit for what it actually accomplished -- it didn't accomplish much.

What we ended up with is just a big ol' mess of a game. It's not much of an honor to the legacy of the series (thank you, Simon) and it's not much of a fighter. The best I can say is that maybe you should pick up the soundtrack independently of the game. You'll probably enjoy it more.