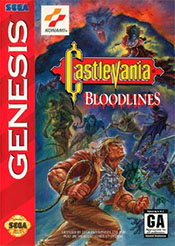 For many of us, the mid-1990s seemed like a dead time for the Castlevania series. After Super Castlevania IV, we had a lackluster (remake) experience with Castlevania: Dracula X, and the seemingly rote adventure in Castlevania Bloodlines. Those of us expecting more evolution from the series were stuck with games trying to go backwards.

In the case of Bloodlines, some of this animosty is earned, and some of it is just a natural come-down from the truly excellent Super Castlevania IV (plus, not having a chance, in the States, to play Rondo of Blood, we never got that second "high" from another truly great game). To its credit, Bloodlines tryies to give a more fleshed out experience. First and foremost is the story, which features our heroes globetrotting after Dracula -- and not like in Castlevania II. Here we're really going all around Europe, battling through various locations (the Leaning Tower of Pisa, a German munitions factory, and even Atlantis), all thematically appropriate and well designed.

Much praise should be heaped on the Leaning Tower. Sections of the stage are quite interesting, featuring branching paths through the stage (one for each of your heroes), and whole sections at a "leaning" tilt, where the tower rotates around you (plus, the fact that the tower is a good example of the classic Chapel, aka the Red Level, is a nice touch). Many of the stages have nice little tocuhes like this (although the aggrivating play-mechanics of the last castle are best left to be discovered, and yelled at, by players).

Then there's the last bit that Bloodlines gets right -- the two heroes you can play as: John Morris (whip-weilding relative of the Belmont clan) and Eric Lecarde (with his trusty spear). Each play a little different, and have special moves that they can do (like a spear pole vault or whip swinging ala Super Castlevania IV), and with branching paths (as mentioned before) that only one or the other player can explore, there is a bit of replay in finding out what all each character can accomplish and see.

And yet, for all of these features, there a lot that doesn't quite work in Castlevania Bloodlines. Most glaringly is how both players are decidedly old-school in their control. Controlled jumps didn't make the cut, and John Morris is about as handy with a whip as any of the NES heroes (Simon was sadly the first and last whip-wielder to have full control over his weapon of choice). They do have a full compliment of sub-weapons to choose from, but most of them function in unexpected ways (for example, the boomerang flies at a arc around the screen, not back and forth like the standard cross, thile the axe functions more like the cross in other games, instead of traveling along a high arc). Whether these changes to the sub-weapons are good or bad is open to interpretation -- I find them more a nuisance than a perk. Plus, the one major innovation Dracula XX has to offer -- item crashes -- are a no-show in this game.

All of this is coupled with a game that is very, very hard. Old-school hard, of course. For me, it's traditional that I die a couple of times in the opening stages of a Castlevania game. I'm not the best gamer, and I take a little time to get warmed up in the harder, older games. In Bloodlines it took me several lives to even learn there was more to the opening stage after the sub-boss (I thought he was the end boss of the stage for the longest time). Stages are hard, often times complex, and very long. If it takes you hours to get through the second stage of the game, don't feel bad. That's just Bloodlines in a nutshell.

Graphically the game is fair, but not super pretty. Colors are sharp, without a lot of depth or blending (the Genesis was never a competitor with the SNES when it came to graphics). Stages look dull, dirty, or both. Bloodlines is, at best, on part with Super Castlevania IV, even though it came out years later.

The music is similarly weak. The Genesis didn't have the best sound system, and most of the music comes out sounding like enhanced NES tracks (enhanced, yes, but after two SNS games, it's once again a step back in quality). A few tracks are quite good, though, and have shown up in later games (showing that the composers did what they could with the limited hardware): "Reincarnated Soul", "Sinking Old Sanctuary", and "Iron Blue Intention". Later remixes do better justice to these tracks than the Genesis ever could.

So where does that leave us with Bloodlines? It's hard being so harsh to a game as old as this one, but it's certainly not the best game for its age, and it hasn't aged as well as other Castlevania games from the era. I know I'm not in the majority of some Castlevania fans, but Bloodlines never won me over. It's not as singularly irrelevant as Dracula XX, and if you had to go for a game on the Genesis, you could do worse... but you could also do better.