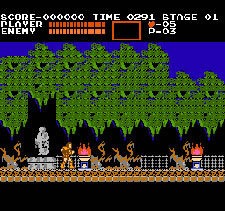 Everyone loves a grand, sweeping entrance to the grounds of a building. The rising columns, delicately cut bushes, the statues positioned just so. It all adds up to a majestic front to a castle, and no entryway is grander than the one for Castle Dracula. Once the grand seat of power in the realm (and generally is at least once every 100 years), the Courtyard was an exterior section of the castle where business of the day could be handled. It was common to see Dracula and his royal court wandering the grounds, admiring the artwork and gardens while bodies stood on pikes.

Although the castle has gone trough some changes in the years since (the perils of having a master vampire in charge), the front courtyard is still quite the sight for any tourist. You can admire those some statues, smell the air coming from the gardens and, if you're lucky, you might just catch sight of a giant bat flying off in the distance. Just don't linger; you wouldn't want to be added to the collection of pike arrangements.

Traditionally a courtyard is a build up area of a castle, an open air "yard" at ground level, surrounded by buildings on all sides. The term is applied more loosely in the Castlevania series, tossed off to describe areas that wouldn't technically qualify as "courtyards" (areas high in the castle that, for obvious reasons, don't touch the ground). For our purposes we're sticking to more literal interpretations of the term "courtyard": an open space, with some kind of architecture (be it tended bushes and fences, or actual built up, walled in yards). 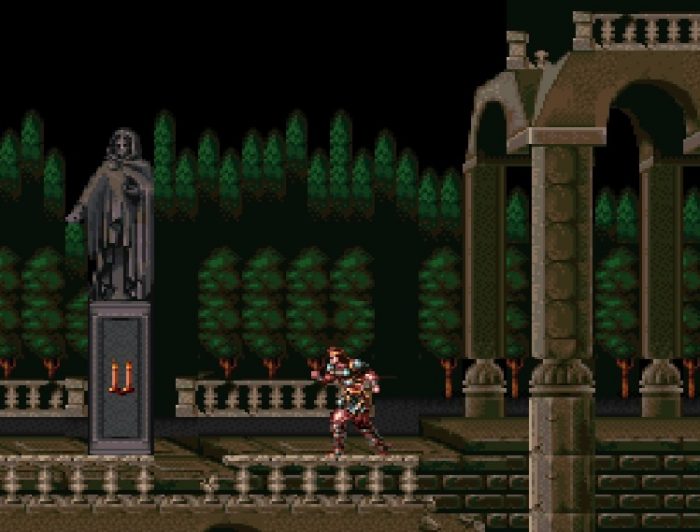 By that definition, then, our first courtyard comes right at the start of the very first game in the series: Castlevania. That game opens with a peaceful courtyard, right after (via cut-scene) hero Simon Belmont passes through the front gates of Castle Dracula. This opening area is a quiet place, a peaceful first area where the player can learn what Simon can do while collecting his first power-ups of the game. This section then leads into the fist proper section of Block 1, which leads him through the Grand Hallway and on to a fight against the Giant Bat.

As Vampire Killer is a lightly remixed port of the original game, built to accommodate the MSX hardware limitations, the game's opening area is another courtyard. It once again gives the player a moment to learn the beats of the game before entering the castle proper.

The next game to feature a proper courtyard does, in fact, have two. Super Castlevania IV opens with another airy starting zone. This first stage, the Ruined Mansion, tracks Simon as he goes from quiet opening courtyard into a second one immediately after, this time filled with gates, vines, skeletons and bats. It then guides the hero through into the stables of the mansion, with ghostly horse heads, all before leading to a fight against the skeletal knight Rowdain.

Later in that game, though, we come across another courtyard. A rundown opening for the Castle Court, Stage 5 of Super Castlevania IV, finds Simon climbing through a marshy, vine-filled area, attacked by frogs and birds, before tracking into the inner courtyard, a walled in area with old statues (and even a cameo of the statue that once held Sypha Belnades). Interestingly this stage lacks a boss fight, instead leading the hero directly into Stage 6 instead.

Castlevania Dracula X: Rondo of Blood brings back the courtyard, although instead of showing up at the start of the game (as Rondo begins outside the castle proper) this section appears as the opening to the castle at Stage 2, "O Lord, Please Give Me Strength". This then leads through to a proper reconstruction of the Grand Hallway, leading either to a fight out in the back yard of the castle against the Werewolf or, via a secret drop down the aqueducts below, a battle against the Bone Golem.

Remake/port Castlevania: Dracula X postponed its courtyard until much later in its remixed adventure. As the entrance to Stage 5, the courtyard served as the short opening before leading hero Richter Belmont up along the walls of the castle before taking him into a fight against the Werewolf once more. 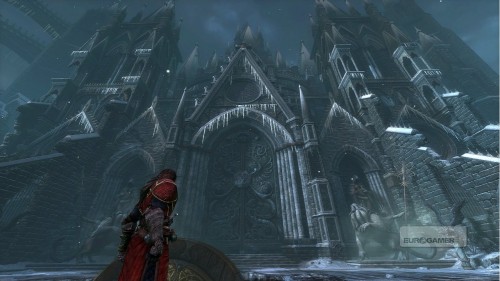 One can argue whether the vampire castle featured in the Lords of Shadow series is properly Dracula's castle or not (as he took it over from Carmilla after killing her, and then becoming a vampire himself). Regardless, the courtyard serves as the opening section of Chapter 6 of Castlevania: Lords of Shadow, serving as the entryway into the Vampire Castle that hero Gabriel Belmont must traverse. He battles against armors, wargs, and the undead, all before taking on the Evil Butcher as a cap to the zone.

Finally in midquel Castlevania: Lords of Shadow - Mirror of Fate, hero Simon Belmont ventures into the courtyard of the Vampire Castle as part of his own journey. Here it's the fourteenth zone in the game he explores, having found a different entrance in originally. It is here that he gains the Combat Cross, allowing him to reach out of the way areas deeper in the castle. But first he has to battle against the Necromancer to keep the item and earn passage back out of the zone again.

The Courtyard section of Block 1 in Castlevania

The Courtyard section of Block 1 in Vampire Killer

The Courtyard section of "O Lord, Please Give Me Strength", Stage 2 of Castlevania Dracula X: Rondo of Blood