As noted previously, the Bloodstained: Ritual of the Night Kickstarter campaign was a huge success. This unlocked a number of potential features that the studio behind the game, ArtPlay, promised to fans. We previously covered the first major set of additions to the game, Randomizer Mode + Playable Bonus Character Zangetsu. A couple of months later, ArtPlay, had the second batch of new features for this already fairly robustly featured game:

Included essentially day-and-date with the main game, Ritual of the Night has had the expected "Boss Rush Mode" as a playable feature to fans to explore (and try to get better and better at in the process). It's a pretty standard feature in the main Castlevania games, having been included in just about every mainline release since Harmony of Dissonance. Here, in Bloodstained, it's exactly the feature you'd expect: you take your version of Miriam (wherever she is in your main adventure) and take her through a series of boss battles, one after another, in an attempt to get a good time (and, thus, earn some bonus treasures). It is what it is and if you're played the previous "Boss Rush" modes in other games, there's nothing unexpected here.

Boss Revenge Mode is, in essence, the same thing just from the perspective of the bosses. That's right, this time you're playing as one of the bosses on your or "Rush" mode, but instead of fighting other bosses, instead your "Hunting the Hunters", taking out Zangetsu, Dominique (who is included here even though in this game she's a bad guys), and finally Miriam. Of course, all three of these are fights that have been seen before as Zangetsu and Dominique are battle in the main adventure, as is a doppelganger of Miriam.

What's interesting here are the four playable bosses. Each one controls very differently, from the lithe Andrealphus to Bathin, who reflects himself around the room, the tanky Gremory, and everyone's favorite vampiress, Bloodless. Some of them are more maneuverable than others -- Bloodless, who we'll talk about further below, plays the most like a normal hero, while Gremory just floats around the room unleashing powerful, but hard to aim, attacks. Each of these bosses have a ton of health and you'd think taking on just three heroes with this set would be easy.

That, honestly, isn't the case. While you are playing as powerful demons with a lot of health on their side, the heroes you're fighting are each their late-game versions who, even in Normal Mode, can be incredibly difficulty to kill. Zangetsu, who is the first hero you fight in order, is difficulty enough that it can be hard to get past him at all. 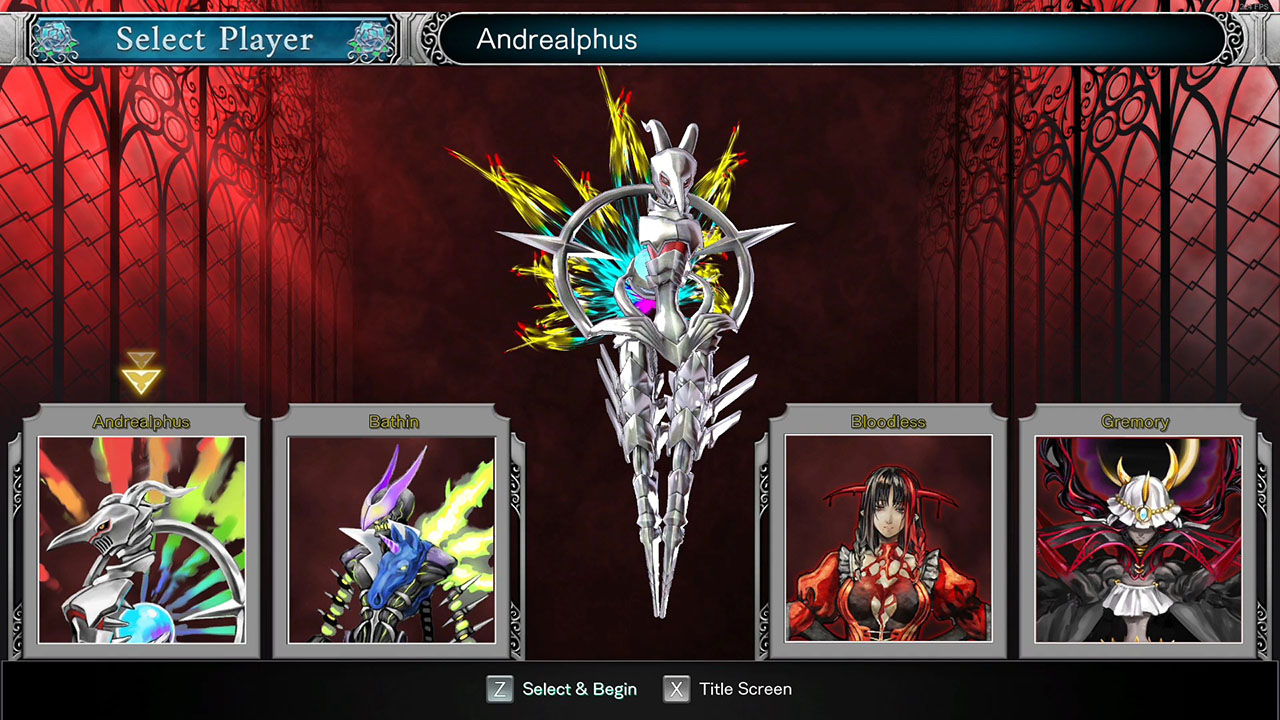 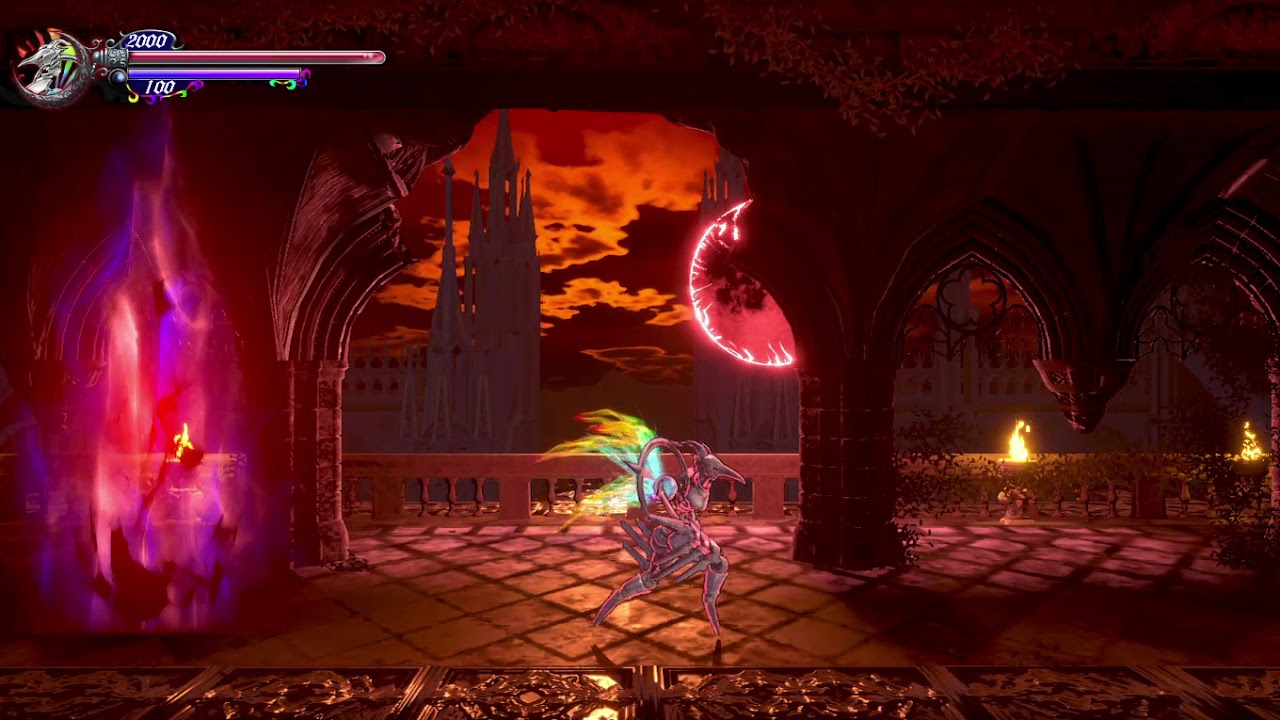 Of the four heroes, I had the most success with Bathin simply because of his teleport ability. You can aim your R-stick and send him reflecting around the room, constantly staying out of reach of the heroes (at least in theory). It's not fast fighting with him, but it is effective. I found Gremory, meanwhile, to be the least satisfying -- despite being an end-boss (or near end boss) in all three Bloodstained games so far, that power and status doesn't translate to Boss Revenge Mode. They're slow, they're kind of week, and they're damn unwieldy. I frankly didn't enjoy my time as Gremory at all.

This is, frankly, a rather slight mode. It's neat to have these four new characters to play with in any capacity but I wish there was more of a run-up in the mode. A few lesser bosses to fight, either from the main game or just taking a couple of the "hero NPCs" like Johannes and letting you fight them first to get your feet wet and make you feel like you're making any kind of progress. Zangetsu is a bad opening act and even if you do get through him, there are only two more fights after (assuming you can get that far). There just isn't enough meat here to make this a mode I'd want to touch again.

Meanwhile, ArtPlay also released a new playable character for the game, a "secret" character that wasn't even part of their main road-map for the year: Bloodless. Yes, after first being playable in "Boss Revenge Mode", Bloodless gets a full adventure in the main game. But where Zangetsu felt a little slight and hardly worth a full exploration, Bloodless actual gives something more for her game.

When you play as Zangetsu, you start with the hero more-or-less fully powered -- yes you do level up, and he can find HP Max upgrades scattered through the castle, but he's essentially a powerful guy already so you're just sanding of his edges, more or less, as you play. Bloodless, though, doesn't have all her abilities. You have to traverse the castle and find hidden crystals that give you your powers (as well as many that house stat upgrades as well). There's more reason to explore every nook and cranny with Bloodless, and you get a feeling like you're earning your time with her the longer you're in the game. 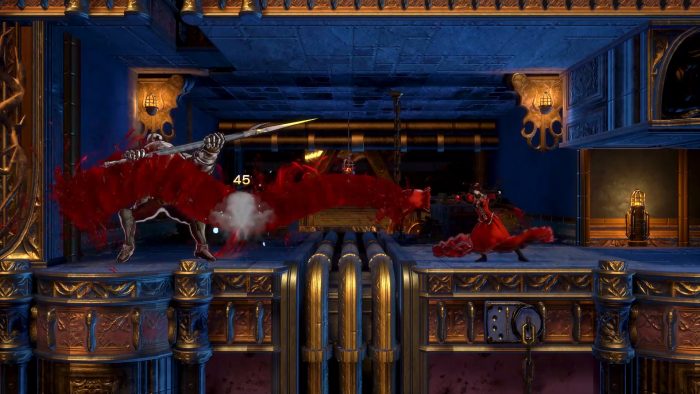 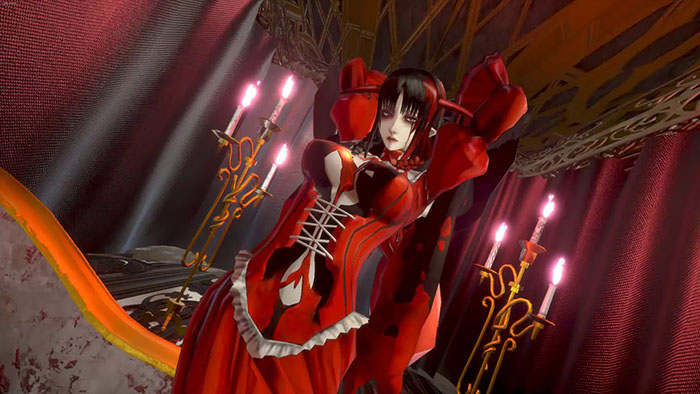 The best thing, though, is this doesn't just feel like a carbon-copy of Miriam's main game, just with all the plot cut out (unlike Zangetsu Mode). As Bloodless you wake up in her boss room, bored of waiting for the hero so you go off on your own quest. You can explore half the castle backwards (which, yes, does mean that often the save room comes after the boss fight blocking it, which can be a bit of a kick in the pants). And as you explore you find powers, abilities, stat boosts, and more. Oddly you can also find gold but, during my play session with the boss I never saw any place to spend that gold, but that's okay. Maybe in a future upgrade.

And I really enjoyed how Bloodless controls. She's lithe and light, with an umbrella she swings like a sword. Her abilities are powerful, from the blood she throws to the eventual upgrades that give her all her Boss Revenge abilities (and then some), and she even has a bit of a parasol glide, reminding me of Princess from the Mario series. She's different enough from Miriam and Zangetsu that the adventure felt fresh and interesting, something I really appreciated as I explore the demon castle yet again in its standard configuration.

Overall, while her adventure is still rather slight, there's more to do, and earn, with Bloodless than with Zangetsu. While Bloodless doesn't feel quite like a full-fledged "Julius Mode" (see Dawn of Sorrow), it's still a fair sight better than the first bonus character mode. Well worth playing, at least once, just to see what this fun and interesting vampiress can do.