Ritual of the Night 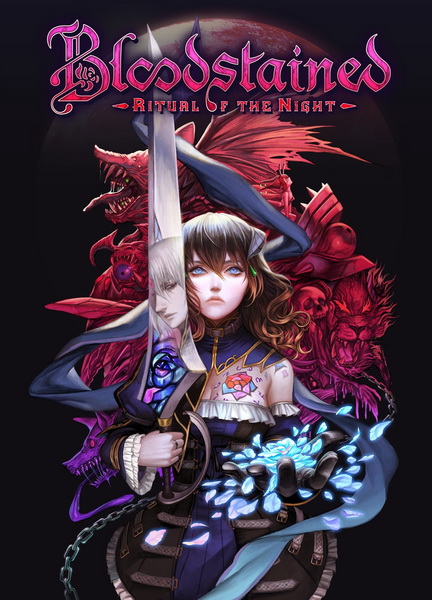 After the events of Bloodstained: Curse of the Moon, Miriam returned to the Alchemists, her home and surrogate family. The alchemists, though, had nefarious plans for the girl (and for another charge under their care, Gebel): the alchemists continued their experimentation of the demon hunter, infusing her body with demonic shards all to increase her power and see just how far she could be pushed. Their goal, seemingly, was to eliminate all the demons across the world by sacrificing the shard-bound warriors. All but two, Miriam and Gebel, died, and Miriam fell into a 10-year-long coma.

When she woke, the world was once again in turmoil. The evil demonic castle that she had stormed and cleansed ten years earlier once again stood, sending its waves of evil energy out across the countryside. And, as she soon learned, the one responsible for the return of the castle was her one-time friend (and demon-fighting colleague), 'ebel He had proclaimed himself the ruler of the castle and swore to unleash all the hellspawn he could (with the assistance of evil demon Gremory, the demon who had once ruled this castle before). In the ten years since Miriam had fallen asleep, 'ebel had attacked the Alchemists and destroyed the guild. Only an apprentice, Johannes, had continued to watch over her and, with her awake, he continued to serve as her guide and assistant.

Reaching the outskirts of the castle, Miriam and Johannes met up with another ally, Dominique Baldwin, a nun serving the church who also serves as an useful guide for Miriam. Between Johannes (who provided assistance by opening his makeshift workshop to Miriam) and Dominique (who would offer to buy and sell gear from Miriam), the demon huntress would have the help she'd need to dive deep into the castle. But they weren't the only people she'd meet along the way as, soon enough, she'd encounter Zangetsu, another demon hunter (this one from the Far East) who instantly distrusted the girl. As Miriam was bound with demonic energy (the shards in her body), Zangetsu suspected her of evil and, immediately upon meeting her, attacked the huntress to test her resolve. Although he didn't kill her, he still suspected her motives. Zangetsu was working with Dominique as well, so while Miriam didn't like the man, she did at least accept he was on the side of good.

As she ventured further into the castle, Miriam ran across another of her one-time compatriots, Alfred. As one of the Alchemists who had experimented on Miriam and 'ebel, it was assumed that Alfred was, in fact, pursuing his own evil agenda. He was after an ancient demonic tome, the Book of Logaeth, which he had once used against the demons before it was lost to him. The tome was in the castle and Alfred had to get it before it fell into Gebel's hands (as allowing the demons to use the book would have wrought destruction across the land). Eventually this lead to an battle between Alfred and Miriam -- the demon huntress came out the winner but not before Alfred fled.

Soon after, with new abilities to venture even deeper into the castle, Miriam came to her second battle with Zangetsu. It was here that Zangetsu gave Miriam the last piece she needed to fight the demons and maybe, finally, seal them away once and for all: his magical katana. With this sword, he said, she would be able to reveal the real evil in the castle and battle it properly. Sadly, as he passed the sword to Miriam, Gremory appeared and sucked thee demon hunter into a demonic portal, probably killing him. With his sword in hand, Miriam swore to avenge him and everyone else she'd lost along the way. She then tracked to the center of the castle, in its deepest keep, to confront 'ebel She had promised to free his soul from the demons, no matter what, and originally she thought that meant killing him.

With Zangetsu's sword, though, she realized what she truly needed to do: as the moon went red above their battle, Miriam sliced the sky, splitting the orb. This brought forth Gremory and free 'ebel from the demon's powers. Sadly 'ebel was killed because of it, but at least his soul was freed. Gremory fled, and Miriam was forced to pursue.

Eventually Miriam found a way into Gremory's demonic realm, another room in the castle with a red moon, and this opened a portal forward. There, though, the next surprise was revealed: Dominique was not the kindly ally everyone thought. She killed Alfred, stealing his book, and fled into the demonic realm to use the book's power to summon forth true evil: the demon Bael. Miriam was forced to go even deeper on her journey so she could confront the last evil, Dominique and the demon he bound herself to. Inside the realm of Bael, Miriam fought her best fight, finally cleansing the demon from the castle and freeing the land. As she stood outside the castle with Johannes, the two remarked upon the evil wrought, the lives lost, and how the world might have been saved, but that the costs might have been high indeed.

The most important thing we can emphasize is the fact that the stories of Curse of the Moon and Ritual of the Night don't really seam together nicely. If you play through both standard play throughs of the Curse (first with all four party members alive, and then second sans-Zangetsu as the party heads back through the castle to stop the demon-possessed hunter and save his soul), the canonical ending would appear to be that Miriam, Alfred, and 'ebel survive, Zangetsu is dead, and the demons are stopped for a time. But then, in this game, Zangetsu has returned, alive and well, with absolutely no explanation. Maybe the Church found a way to revive him and maybe that's how he's back (since he's working for them). It's a solid explanation.

This was fixed some (and only some) by the midquel, Curse of the Moon 2, that brought Zangetsu back from the dead (without explanation, admittedly). Dominique is a playable character there, a hero, it serves to connect ideas between the two games. Of course, it also introduces its own issues, namely how all these characters could meet in the midquel and then completely forget each other in Ritual of the Night. Our supposition is just that these games take place in parallel universes and we aren't supposed to view Curse as a proper prequel to Ritual, even if that's the term ArtPlay uses for it.

Of course, that can easily be chalked up to the fact that two different companies made the various games (ArtPlay for the main game, Ritual of the Night, and Inti Creates for the bonus prequel, Curse of the Moon and it's sequel) and they must not have worked too closely on each of their stories. Still, it's surprising the continuity issues that have cropped up considering we only have three titles so far and that Igarashi made a lot of moves to clear up the continuity of the original Castlevania series. Flaws like this feels out of character for the producer.