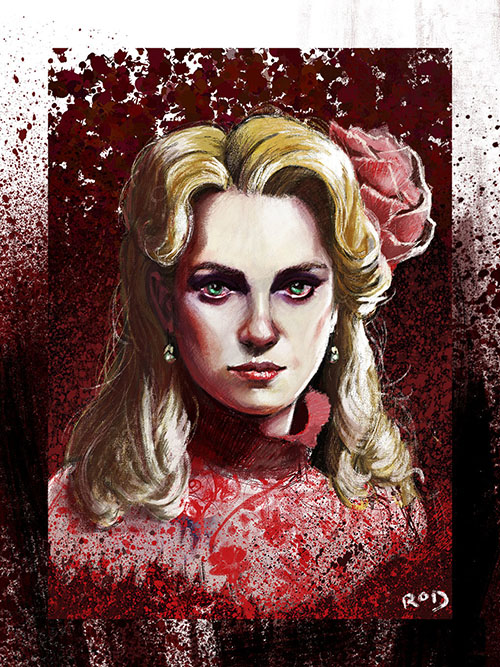 Poor Lucy Westenra. Setup as a sociality and debutante in Bram Stoker's novel Dracula, the character serves no greater purpose than that of a stock fodder character to get bumped off. Her best friend, Mina Murray sits in the spotlight, the unifying character that brings everyone in the novel together (including, in the end, the villain, Dracula), but Lucy exists essentially to be introduced and then, when ready, get killed off for the sake of the story.

Heck, in a way, her death is an early example of fridging, the act of taking a female character, creating her as a love interest for a heroic male character (or, in the case of Dracula, three heroic male characters) and then killing her off to serve as motivation for their heroic men. Lucy's death is a catalyst that kicks the back half of the novel into action but it serves little purpose for her own character. She doesn't grow or change (unless you count coming back as a soulless vampire as "change"), leaving the book more or less in the same place as where she started.

This may be part of the reason why adaptations of the novel tend to downplay Lucy's involvement in the story (or cut her completely). When she is included it's often to serve the same purpose as in the novel: the stock, fodder character who is killed so the heroes can realize there's an evil in town and kill it before the beast kills the female character that's still alive. Lucy gets short end of the stick, sadly.

Lucy is introduced as Mina's best friend, a rich young woman of noble lineage who spends much of her time out at the family estate in the country. While Mina's fiance, Jonathan Harker, was out of town on business (serving paperwork to a count in Romania), Mina stayed with Lucy in the country to help take her mind off matters. Lucy entertained her friend, alongside a trio of three suitors for Lucy's affection -- the noble lord Arthur Holmwood, intelligent doctor John Seward, and Texan cowboy (and secret vampire hunter) Quincey Morris. The days were spent in fun and merriment.

Mina eventually left, though, to go find Jonathan in Europe after he had an apparently nasty accident. This left Lucy with her three men to choose from, a choice she eventually made (after much merriment and deliberation), settling on the nobleman Holmwood. All three men stuck around for a time, though, as they were themselves friends (and one-time army buddies), all so they could stay in her presence just a little longer. This came as a boon when, quite suddenly, Lucy's health took a turn. She started getting sickly, anemic, and the doctors had no idea what could be causing it. At a loss, and sick with worry, Seward called in a colleague of his own, Dr. Abraham Van Helsing, to investigate, and what the good doctor said was quite shocking: Lucy was being fed upon by a vampire.

Although this idea seemed preposterous, the men all did agree to donate their own blood to help replenish what Lucy was missing. For a time this helped, restoring some of the poor woman's good health, but then, one night, all progress was lost. All her blood was drained in a seeming instant and Lucy died. The men were, understandably, distraught, but her death wasn't the end of the story. Van Helsing suspected that Lucy wasn't done haunting this group of friends.

Staking out where Lucy was buried, Van Helsing convinced the men to join him and watch over the grave for anything... suspicious. Soon enough they did spy movement; it was Lucy, still dressed in her burial robes, stalking the night as if she were still alive. Holmwood wanted to run to her, to embrace his revived love, but Van Helsing knew the truth: the Lucy they knew was dead, replaced by a hideous monster wearing her skin. When she went inside her mausoleum to rest for the day, the men barged in, saw the pallor of death upon her, and knew the truth.

Taking up arms, the men prepared to do what had to be done: sending Lucy to her final, true rest. It was Holmwood that struck the fatal blow, driving the stake through her heart that killed the woman. Staked, and then beheaded, Lucy was dead, unable to come back ever again. The men mourned the loss once more, but were assured that their love was safe in the arms of Heaven. However, their fight wasn't over, as they still had to track down the beast that did this to poor Lucy, the Master Vampire behind it all. But for Lucy, her story was over, a young life cut short by the evils of the night.

As with all the characters of Dracula, Lucy regularly shows up, at least in a supporting role, generally so she can be the first bumped of by Dracula before the vampire turns his sights to Mina. That said, there are two adaptations of note that do something more with the girl. The first is the 1979 Dracula which switches the names of the two female leads, making Lucy the lead heroine while Mina becomes her friend (and eventual fodder for Dracula). It's an interesting choice, and lets Lucy survive the film for once.

The 2013 NBC series, also called Dracula, expands Lucy's part even further. Here she is the friend of Mina, and yes, she does fall under the sway of Dracula eventually. But for much of the story she's caught pining for the one she loves: Mina. While Lucy has many suitors, she's actually secretly a lesbian and has always longed for Mina. While her fate may have eventually been the same (although the show was canceled before all the plot lines could have resolved), this expanded story added depth to Lucy's character and made her much more than just a stock role to fill.

And, of course, we'd be remiss if we didn't mention the Castlevania character with the same name, Lucy Westenra. Clearly taking her name from that of the original character, this Lucy appears as an assistant and guide in the (sadly canceled) title Castlevania: Grimoire of Souls. No word on if she would have eventually been turned into a vampire, as always seems to be Lucy's fate.