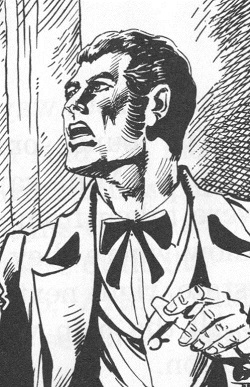 Arthur Holmwood is likely one of the least interesting of the "three suitors" in the original novel by Bram Stoker, Dracula, at least by modern sensibilities. As a lord, and a wealthy one at that, he had a natural place in English society, especially among the gentry (of whom all of our characters belong). But when viewing the novel with modern eyes, it's hard to see what role Arthur serves in the narrative. He's the one that wins Lucy Westenra's hand in marriage, but he neither has the skill to try and keep her alive when Dracula attacks (that role falls to Dr. Seward) nor is he very charismatic (at least not in comparison to Texan Quincey Morris).

As far as the structure of the novel goes, Arthur should come across as the lover who wins, and then loses, his beloved, but Arthur always seems to get lost in the narrative of the story (even in its various adaptations). He's the money, and helps fund their excursion to kill Dracula, but beyond that he's just there while the other characters seems to do more. The novel has a lot of characters involved doing all different things for the sake of the narrative, but once Lucy dies Arthur just seems to exist.

It would have been interesting to see Holmwood do more either before or after Lucy's death... that or perhaps we needed one less suitor in the story. In comparison to the other characters, Arthur is just there for the sake of his money. Not a great legacy for the character, which may be why Quincey was made into a vampire hunter for the Castlevania series while Holmwood was left on his estate.

As one of three suitors for the hand of the young noble woman Lucy Westenra, Arthur Holmwood was positioned as the rich lord who could provide Ms. Westenra with the security she desired. Dr. Seward was smart, Quincey Morris had the America charm, but only Holmwood brought land, title, and nobility to the equation. So, after a courtship between the lady and all three men, she settled on Arthur as her prize, and they planned to be wed soon after. That, sadly, would not end up happening.

Months earlier, when Jonathan Harker -- fiance of Lucy's best friend Mina Murray -- went to Romania on a job for his law office, he signed the deeds to an English estate over to one Count Dracula. Dracula, as it turned out, was a vampire, and as soon as the Count hit England he started looking for a woman to turn into one of his new Vampire Brides. With knowledge of Harker's personal life, Dracula went after those closest to the man, and he started with Lucy. She quickly fell under his vampiric spell and, over the course of a few evenings, gave up her blood to the Master Vampire.

As she lost blood she also grew unhealthy and, naturally, the three men closest in her life came to her aid. Dr. Seward tried to save her via medical means, with Holmwood fronting the cash for whatever was needed. As it turned out though -- and this was discovered when an associate of Seward's, Abraham Van Helsing, came to investigate the case -- Lucy was being fed upon by a vampire. The men tried to pump her full of blood, which worked for a short time, but Dracula visited again and again and, soon enough, the girl died.

Arthur was, naturally, distraught, but the evil wasn't over just yet. As Abraham feared, soon the woman rose from her grave, stalking the night and stealing babies from their cribs so she could feed upon them. The men had to stake out her crypt and wait for the foul creature to return. Then they struck, with Holmwood being the one specifically the drive the iron stake through her heart and put her soul to rest. It was a lot for the man to take and he broke just a little inside that night.

Still, the master vampire responsible for this atrocity lurked. Soon Lucy's friend, Mina, also fell under his sway, with the same "chronic anemia" ruining her health. With knowledge provided by Harker, the men banded together to find the various resting places Dracula had around England and destroy them. This only lead Dracula to flee the country back for his homeland of Romania, though. With Arthur's financial backing the men were able to book passage and pursue, stalking the vampire all the way back to the steps of his castle.

There the group valiantly fought against the vampire, and his minions, putting the evil to rest. Dracula was defeated and, so they assumed, his foul magic was stopped, once and for all (even if it was only for a time). Holmwood went back to England and mourned the loss of his love. Eventually, though, he did remarry, settling down and starting a family to carry on the Holmwood name.

As with all of the characters in the novel, Arthur Holmwood has appeared in most every adaptation of Dracula. That said, when it comes time for character to be cut (for one reason or another), Arthur is often the first on the chopping block. His purpose in the story often can be covered by other characters, that is when all three suitors are even needed at all.