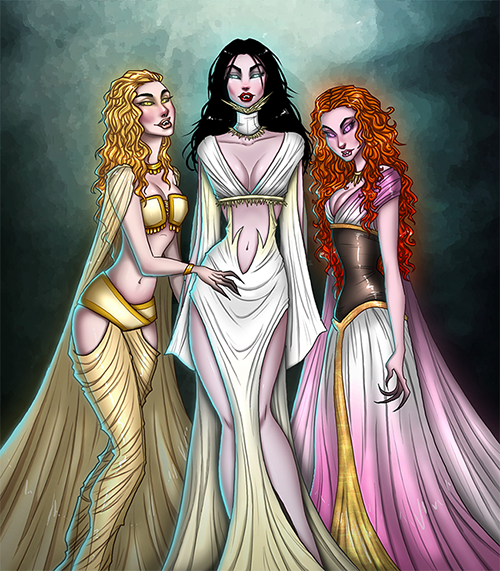 In pop culture, where Dracula goes, the three vampire brides are sure to follow. They are a part of the iconography of the novel and, by extension, many of the adaptations that have followed. It's interesting, then, that in the original story the three "brides" never had names. Although some have ascribed that one of the vampire brides may have been Countess Dolengen of Gratz, a vampiress that nearly attacks protagonist Jonathan Harker in the short story "Dracula's Guest", this is neither confirmed no denied in Bram Stoker's novel.

Instead, the best descriptor we have of the Brides of Dracula is that they are "sisters". This, too, may not imply an actual familial connection by blood. Instead it's likely that the brides all share a "sisterly bond" via their vampirism. All three were turned into vampires by Dracula (it's at least implied as such), and the term "sister" is used again by human characters Lucy Westenra and Mina Murray to signify their own bond of friendship. Later still, the brides refer to Mina as their "sister" after Dracula begins the process of turning her into a vampire.

Thus it's hard to know the full extent of Stoker's intent with these characters. Although there's an implication of incest between the group, a note that two of the brides share certain traits (like an aquiline nose) with Dracula himself, but again the novel doesn't go into detail. Much has been written about who the sisters could be and what their true connection to Dracula might have been, which is interesting considering they don't actually feature that heavily in the main part of the story. They're window dressing, in a way, but Stoker was much more interest in in events outside of these characters than detailing their own life and history.

Ignoring the events of "Dracula's Guest" (as it's exact connection to Castlevania continuity is hazy at best), the first time we spy the Vampire Brides is late at night in Dracula's castle. Solicitor Jonathan Harker had arrived earlier in the week with paperwork for Dracula to sign, deeds and writs that would transfer ownership of land in England over to Dracula. After getting everything in order, Dracula essentially forced the young lawyer to stick around for a few days, whereupon he began feeding on the lawyer, stealing away the young man's blood and trapping him in the castle as the lawyer grew weaker and weaker.

The situation was only exacerbated by the other denizens of the castle Jonathan met. Although Dracula had told the solicitor not to go exploring the castle, Jonathan, understandably, eventually ignored the vampires words. As he explored the various rooms of the castle, Jonathan ran into the three brides, two brunettes (who bored a striking resemblance to Dracula) and one blond, all of whom seemed all too eager to toy with Harker. They had their fun, and came close to feeding upon him until he died, but at the last moments Dracula intervened, fighting them off and taking Harker back to his rooms.

Harker was weakened, unable to escape, but Dracula continued using him, for knowledge as well as blood, as the vampire made his preparations to leave Romania and go to his new holdings in England. Eventually the time came and Dracula abandoned Harker, having no further use for the man, leaving him to die at the hands of the sisters. But instead of meeting that fate, Jonathan took a plunge out a window, falling to the waters below to make his escape. He would wake up days later in hospice, tended to by kindly people, while the vampire brides were left without their tasty meal.

The brides don't return to the narrative again until much later, having been left simply to guard the castle if the vampire lord ever returned. The came out to the camp that Abraham Van Helsing and Mina Murray has setup on the castle ground. Van Helsing and Mina were part of a party that had chased Dracula out of England (after the series of events in the main part of the novel) and they were waiting at the castle for the vampire to return. They beckoned to Mina, sensing the growing vampirism within the young woman (as she's been bitten, and fed upon, by Dracula). Mina resisted them, but she did feel the connection and she knew that Dracula's hold over her was growing.

Knowing that he had to stop Dracula from hiding away in his crypts, and that the other vampires had to be put down as well, Van Helsing eventually ventured into the castle. He explored the rooms, finding any hiding place that could keep the vampires. This led him into the crypts where he found the caskets for the three brides. Each was asleep in in the coffins, making them easy targets for Van Helsing. However, as he tried to stake one he was mesmerized by her beauty, becoming instantly enchanted by her beauty. A scream from Mina broke the spell, though, allowing Abraham to come to his senses. With a thrust of a hammer, Van Helsing drove a stake through the bride's heart before beheading her. He repeated the process with the other two brides, cutting off these protectors from Dracula's control. The brides crumbled to dust, their last night on Earth spent before their master even returned home.

The Brides in Pop Culture:

There have multiple Dracula adaptations for stage and screen, and the Brides have appeared in many of them. They aren't also the same trio, mind you, as the term "bride" has been applied liberally over the years to any vampire made by Dracula (including even a few men). There are countless spin-off works that feature various brides, some of them based on actual historical figures including Queen Victoria and Erzsebet Bathory.

There have been a few adaptations that specifically name check the Brides, though, from Hammer's The Brides of Dracula (although these ladies aren't technically brides of Dracula, no matter what the title might say), to Chelsea Quinn Yarbro "Sisters of the Night" trilogy of novels, and even in an upcoming TV series Brides of Dracula (that's in active development as it bounces from one studio to another).