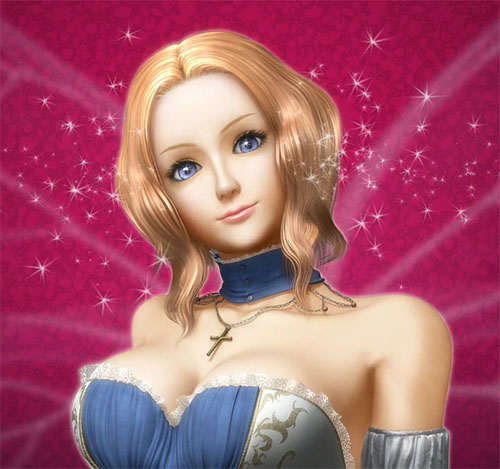 To understand Angela's role in the Pachislot Akumajo Dracula games you first have to understand the way these games are made and how they court their target audience. Pachislot games are not popular in the U.S. (at least not to any where near the popularity that have in Japan). Pachinko and Pachislot games are common in arcades and pachinko parlors in Japan but these kinds of establishments are not widespread in the West (they exist but are exceedingly uncommon). They're gambling, of a sort, and their goal is to keep their players hooked in so they continue to shove tokens (or whatever the currency of the arcade may be) into the machines.

A sorceress and dancer by design (Angels wears a skimpy dancer outfit in the white and blue colors favored by the Belnades clan), Angel provides glimpses of skin as she dancers her way through mini-games, many of which provide the player the opportunity to see closeup, cheesecake shots of the scantily clad woman. She's there as eye candy, through and through, as that's the nature of these kinds of games.

Sadly, that's most of the point of Angela because the player never really plays as her. Heck, it's hard to say they actually play as the hero of the game, Trevor Belmont, as really the "play" of the game is limited to controlling the three reels of the gambling machine and occasionally letting the game play a cut-scene that might provide some better prize money (and a little bit of female skin). It would have been nice if the games could have provided a little more for Angela to do, but that was simply not within the cards (or reels). 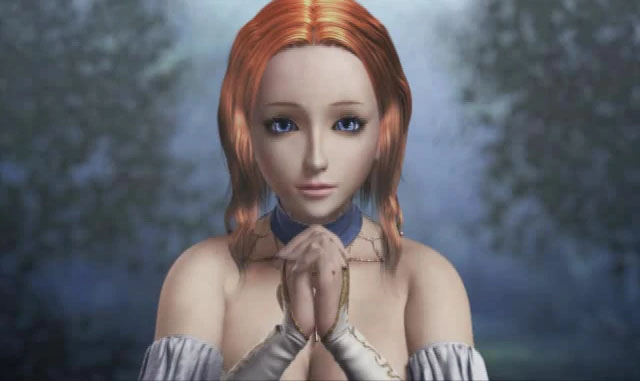 Sometimes in or around the events leading to Dracula's defeats by not only Trevor Belmont but also Hector, his minions found a way to resurrect the demon prince once again. Seeing the castle appear high on the Borgo Pass, Trevor went rushing to the castle to battle the fiends there and attempt, once more, to save the surrounding lands from the curse of Dracula.

On his journey up to the castle, Trevor met a young (and skimpily dressed) woman, Angela. A mage and dancer, Angela volunteered to accompany Trevor on his quest, fearing what Dracula's magic could do to the land if left unchecked. Angela proved a valuable companion, aiding Trevor in his battles and providing attack bonuses in times of need. Additionally, when it came time to face off with the Dark Prince himself, Angel was there, at the ready to heal Trevor when he was too injured to go on.

Due to her bravery and powers supplementing his strength, the pair were able to kill Dracula, condemning his soul back to Hell once again. 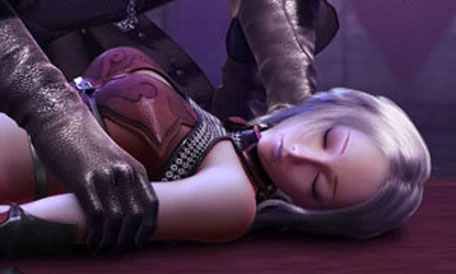 Unfortunately while the heroes had been able to kill Dracula there weren't able to kill the roots of the problem: all of Dracula's minions. A few followers were left alive and they once again found the means and magic to resurrect the Dark Prince. Angela was the first on the scene, but Dracula was ready for her this time. The mage was captured and Dracula placed upon her a cursed necklace, turning Angela into her evil, Dark Angela form.

Trevor, too, knew something was amiss and went to the Borgo Pass only to find Dracula's castle there once more. He battled his way through the castle, fighting the fiends that resided within, only to be confronted by the evil version of his one-time ally. Dark Angela and Trevor fought bitterly, with the goodness within the mage battling to get free, sometimes taking control of her evil-controlled body. However, it was Trevor's own power that saved the day, breaking the necklace and freeing the young woman of Dracula's influence.

The hero went on to battle back Dracula once more while Angel rested, and once the Dark Princess was defeated the two left, assured that this time, for some time at least, Dracula would remain dead.