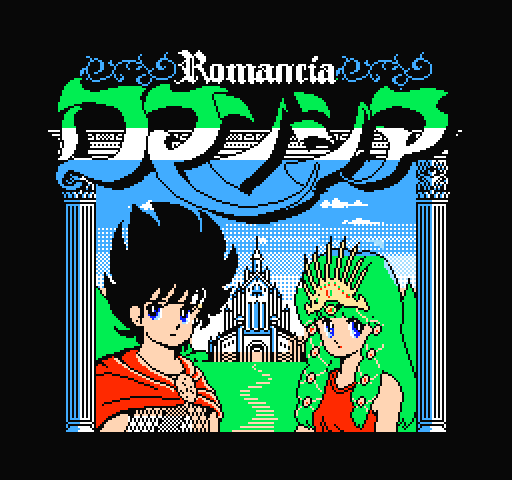 The Dragon Slayer series is, frankly, quite the playful and experimental series. Each game has taken the concepts of what came before and worked to evolve and change the ideas of the fantasy action genre. The series went from a traditional dungeon crawler with Dragon Slayer to a platforming/dungeon crawler hybrid in Xanadu. Now, for Romancia, the third game in the series, Dragon Slayer takes real steps into the Metroidvania genre but ditching many of the staples of RPG for a stripped down, focused adventure.

Released in 1986 for the PC-8801, MSX, and basically every other console/computer hybrid in Japan, along with a release on the Famicom a year later, Romancia (aka, Dragon Slayer Jr.) is a title that saw the platforming potential of the previous entry, Xanadu, and felt that was worth exploring over the other traditional elements of the series. Instead of a straight dungeon crawler, the game shifts everything to the side-scrolling perspective. Now your hero, Prince Fan Freddy, has to explore the lands of Romancia and the evil next-door kingdom of Azorba, save Princess Selina, and bring peace the land, all the usual stuff you'd expect in an adventure game.

Dedicating the game to just a side-scrolling perspective forced the developers to make some changes to the way the Dragon Slayer games had played before. Now, instead of just bumping into enemies to damage them, the hero has a dedicated attack button they use to swing their (rather piddly) sword around. This give the action a much more energetic feel, befitting the change of perspective for the whole of the game. You're even more of an active participant this time around than in games past.

Naturally, the game also ditches the change of perspective for battles this time around. In Xanadu touching an enemy would bring up a battle screen with a whole pack of foes to kill. Encounters are more akin to the original Dragon Slayer where you see an enemy and you take it on, one-on-one. This makes the game feel very streamlined and focused. You have one view and you're going to stick to it no matter what.

Not that you really should take all that many battles. The game doesn't have an experience counter, nor do enemies drop money. The best you can get is some extra hearts to refill your health but you're really be better off just avoiding anything you can and quickly dispatching only those foes truly in your way. You're on a quest and time is off the essence so don't bother lallygagging around grinding pointlessly when there's work to be done.

You actually do need to worry about how much time you spend in the game, too, because there's a hard time limit to your mission: 30 minutes. Your get your prince, set out into the world, and you have to figure out where to do, what to do, what to collect, and how to progress in that time span. Once time is up the game ends and you're set back at the start to do it all over again, a fresh prince (but not the Fresh Prince) once more starting off on their adventure to save the princess.

The hard cap on time does a good job to motivate players. The quest itself is pretty easy once you know what you're doing and where you're going. Wander into town, complete a few healing quests, collect the gear you need from various locations in town, and then venture forth into the dark side of the map, the evil kingdom, to explore their underworld and find the princess. Once you have it all down you can get progress going pretty quickly, but getting to that point is the real goal of the game.

Due to the time limit many of your play-throughs will be spent figuring out all of the games secrets and the various steps to progression each time around. Nothing is randomized so its really up to you to study, to map out everything, and to get your plan in place to commit to your rescue mission and save the day. If you can do it all in the short time limit then you truly are worthy of saving Romancia. Getting there, though, really can feel like a struggle without some kind of guide to assist you. 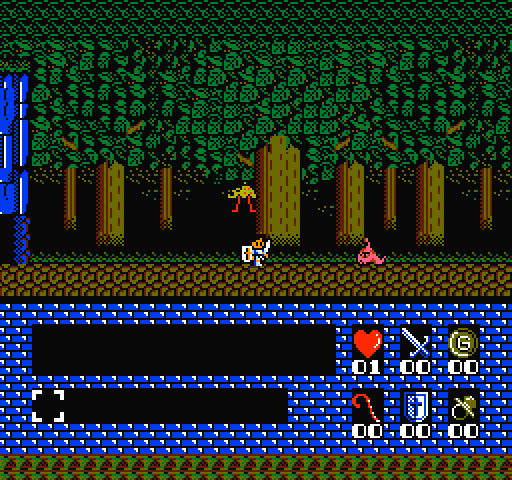 Frankly, the quests you perform in town feel more repetitive and time consuming than really engaging. There's a whole lot of slowly walking back and forth, committing each deed one by one so you can collect the next time. Once you learn how to venture into the heavens, and how to cross the bridges to the dark kingdom, you'll find yourself spending a fair bit of time doing these steps over and over again, too. Even when you know what to do and where to go there's a lot of back and forth tracking across the map just to get stuff done. And with that time limit hanging over your head it can feel so slow and terrible.

The game, though, really does try to push itself, and the whole series, forward. It takes the first real steps into being a true exploration adventure. You have an inventory of items that you have to collect and use, each with a specific purpose. Progression is based on these items and you won't be able to complete your quest until you find all the gate keeping items and use them properly. That, combined with the action combat and platforming aspects, makes this feel like a true Metroidvania game, of the earliest variety, further committing to the journey that Xanadu started.

From a historical perspective Romancia is interesting, but as a game for modern players the title is lacking. It's interesting, and the sense of accomplishment when you complete everything in the short time limit is very real. With that said, the game is short, a tad shallow, and it lacks the real depth of Xanadu. I was amused during the time I spent with the game, but once it was done I found I wanted the deeper challenges of Xanadu instead.

Although the graphics come straight over from Xanadu, the game play of Romancia feels far more akin to the Metroidvania titles that would be coming down the way in the next couple of years. The most direct comparison that comes to mind (and not just because this is a Castlevania site) is Castlevania II: Simon's Quest. These two games feel like kissing cousins, from the active game play to the gating key items and obtuse puzzles. Konami and Nihon Falcom were clearly playing in the same pool.

Frankly, for those players that really liked Simon's Quest, Romancia has many of the same bones to its game play. An open world to explore, little dungeons and other rooms set around everywhere, plenty of enemies to kill, and just enough challenge to keep players on their toes. Heck, the time limit even feels similar in both because if you fail to finish Simon's Quest in a short enough time your hero dies. It frankly wouldn't surprise me if the designers at Konami took some notes on this game when they were making their own open-world platforming game. There's enough shared DNA to make the two games feel very much of-a-piece.