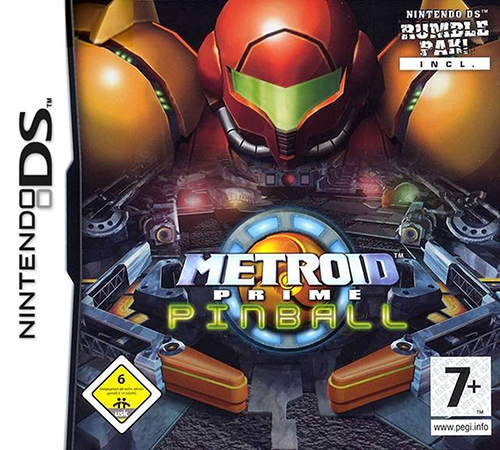 With the release of 2002's Metroid Prime Nintendo has a verifiable hit on their hands. The Game Cube wasn't exactly a smash success, selling units far behind competitors Sony (in all regions) and Microsoft (at least in the U.S.). What Nintendo needed was something that could make their system look like a real competitor and, honestly, Metroid Prime was just the game. While it didn't turn things around completely for the Game Cube it did make the system seem like more than just a weird purple box for kids.

The development of Metroid Prime hadn't been easy (with Retro Studios being forced to redo work over time to get something up to Nintendo's standards) but once it hit shelves it became a must-have for any Metroid fan. That, it should be noted, despite the fact that when it was first pitched fans balked. "A 1st person shooter Metroid!? It's never work!" And yet it did, and was magnificent. Franchise extension was then the order of the day with Nintendo looking at where else the Metroid franchise could go. Metroid as a pinball game? It's just kooky enough to work.

Honestly, the thought of Metroid as pinball is a lot less silly than, say, a first person shooter set in the universe. Samus has been able to change into a morph ball since the first screen of the first game in the whole series. An adventure based around her ability to become a ball isn't the weirdest idea on its face. Plus, this wouldn't even be the first pinball game Samus participated in as the Virtual Boy Galactic Pinball featured a table where Samus (and her ship) cameoed.

That said, let's be honest: Metroid Prime Pinball is a really odd title. While Samus as a pinball heroine is one thing, a "creative retelling" of the first Prime game is pretty odd. There isn't anything about Metroid Prime that necessarily lends itself to an adaptation as a pinball game, and while Prime Pinball does what it can to work in elements of that first-person shooter (just not the actual first-person elements) it all still feels like quite an odd fit. 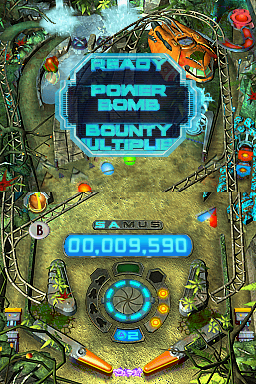 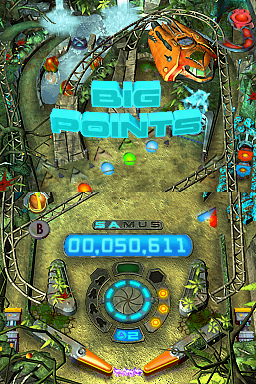 In the game Samus can initially drop onto one of two locations: the Talon Overworld or the Pirate Frigate. Each place offers a fairly standard pinball setup: a two-screen board (as this was made on the Nintendo DS) with paddles, ramps, bumpers, score bounces, tracks, and everything else you'd expect. Each one of these tables has zones to aim at, bonus places that will unlock special modes on the table, with most challenges being kill a bunch of enemies (by bouncing ball-Samus into them or shooting at them from a fix-position, crouching Samus) or collecting orbs (by running over them with ball-Samus). Complete a challenge and one of the Chozo Artifacts will appear on the table to be collected.

Unlike in a standard game of pinball, where the object is simply to rack up a bunch of points until you run out of balls, in Metroid Prime Pinball you want those Artifacts. You have to collect all 12 (as in Prime) to then access the final Chozo Ruins board. Clear the two main boards, and a couple of boss fight boards at the Phazon Mines and Phendrana Rifts, and the Temple will unlock. With artifacts in hand you can start the play-mode on the Ruins table and, once you clear that the final location, Impact Crater, will unlock, allowing you to play that table for the two-part boss fight against the Prime Metroid.

The game gets points for working in as many elements as it could from Prime. In structure its less a standard pinball video game, like Pinbot, and more an adventure with pinball as the facade, like Pinball Quest or Mario Pinball Land. The latter is actually the most apt comparison as that Mario title was developed by the same studio that made Prime Pinball: Fuse Games. Prime Pinball does show a level of confidence and assurance in what the studio was doing as they created a pretty competent game of pinball here.

Thing is that it's hard to call the game more than competent. Metroid Prime Pinball is an easy game to like but it's much harder to love simply because it doesn't feel all that ambitious. Part of the issue is that there's only two real tables here, the Frigate and the Overworld, and both play more or less the same. It's traditional pinball with Prime graphics and while, yes, there are some activities to do for small bursts of time it never feels like the game really pushes its concept far enough. 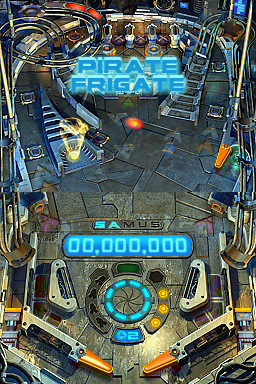 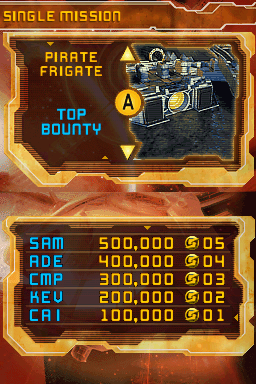 A Metroid pinball game would be cool if you could get a more direct perspective on some of the action, letting the game zoom in and out from the wide shot of the board to behind-the-back sections as you navigate Samus through twists and turns in her ball form. Sections of shooting would need to feel more integrated, and the whole thing needs to have a better developed sense of exploration. Metroid games are all about exploration but this game ties you two main board, a couple of boss fights, and absolutely no back-tracking or searching for secrets.

Now, if the creators had wanted to make a more old-school title with Metroid slapped on it I think maybe that could have worked. There are times where it feels like the team really wanted to add in old-school flourishes with traditional board setups, bleeping and blooping alarms, and the traditional flashing lights of a pinball board. If the game had committed to that and just been a Metroid pinball game for the old-school set but all the weird activities and alternate features thrown in ruin that old-school illusion and charm.

Like, in either direction the game never quite has the depth you'd expect. it doesn't really go far enough with true Metroid integration to really feel like a natural brand extension. Despite that, though, it also doesn't go traditional enough to the pinball experience to make it feel like i has classic pinball depth. The game either needed mor to do outside the standard pinball mechanics or it needed bigger boards with more traditional pinball targets and setups to carry the classic feel. Instead the game sits between both sides and never really feels like it does either very well.

I think there's a spark of something really interesting in Metroid Prime Pinball but the game manages to miss the mark just enough to hold it back from greatness. It looks decent, has some rocking tunes that play as you go through the tables, and it certainly does try. It actually presents a decently forgiving game of pinball that can be fun for doses, making it a worthy pickup for a few minutes at a time. But whether you're looking for a deep and crunchy Metroid production on the pinball front, or a classic feeling game that evokes the pinball halls of old, the game just doesn't deliver on either front. It's fine, but really needed something more to make it truly special.