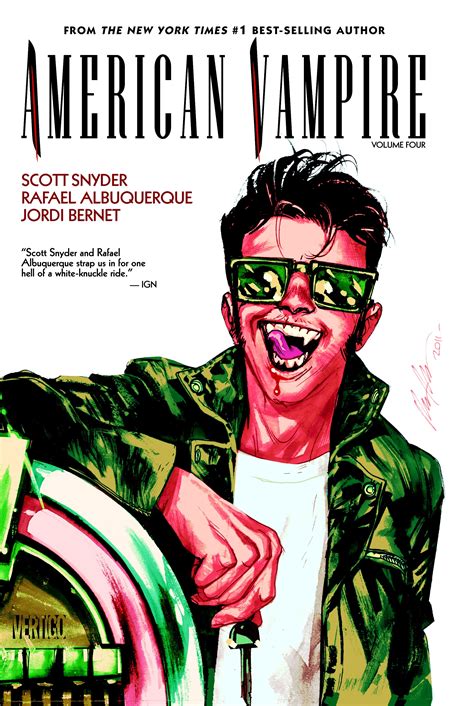 I've been down on the last couple of books in the American Vampire series. The first volume is so good that it promises story potential that the next two books didn't really seem to deliver. A lot of it was table setting and side stories that felt like they were meant to build to something more but, so far, hadn't delivered. Volume 4 doesn't necessarily change that in any specific way, featuring a set of three side stories that don't really connect to the overall narrative much at all (at least not yet that we can tell), but they're also far enough removed from the overall plot line that, for once, it's easy to simply enjoy their tales for what they are.

Don't get me wrong, I really want this series to start focusing on whatever major plot line it has in store. The whole vibe is that, over the course of 100 years (from the 1920s setting of the first book to, presumable, the modern day when this series finishes) there will be an overarching story that unifies this all. That story, whatever it may be, is still in some amorphous shape and I feel like it needs to take hold. However, the three tales in this book make good use of the anthology format. If we have to have side stories instead of the main plot line, this is at least the kind of book I'd want for that.

The first story of the set is probably the weakest. "The Beast in the Cave" is another retcon story for this series which tells of a time when Skinner Sweet and James Book were brothers. Skinner's family died in a fire and he was taken in by the Book family at a young age, growing up with James. The two joined the military together, serving the Union as they drove the Native Americans from their lands (historically this was done in retaliation for some Native groups serving with the Confederates in the Civil War). As the military fought against one group of Natives, their leader, Hole in the Sky, sought out protection from an ancient, vengeful spirit: Mimiteh. Thinking that her power would save his people, Hole in the Sky pleaded for her to come from her cave and attack the U.S. troops.

As it turned out, though (and this should be expected for a series titled American Vampire), Mimiteh was actually an ancient and power vampire. She didn't much care for Hole in the Sky's request, having locked herself in the cave ages ago to hide her hunger from the world. Hole in the Sky, though, stole her power, turning himself into a vampire just like her, and he thought he could use that against the U.S. Instead this dragged Mimiteh out of her cave, and she slaughtered the whole of Hole in the Sky's forces, the vampiric leader included. When Skinner and Book made it to the ridge to see what happened, all they found was carnage and death. Of course, by this point Skinner had basically gotten himself court martialed out of the military, starting his long career on the other side of the law. 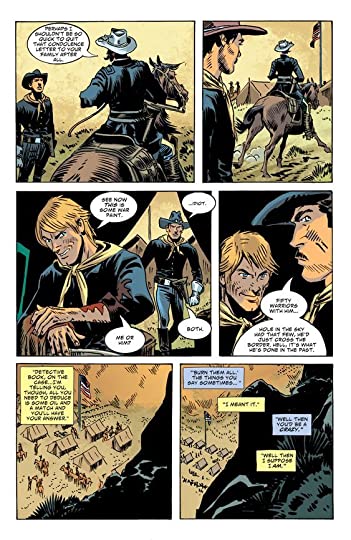 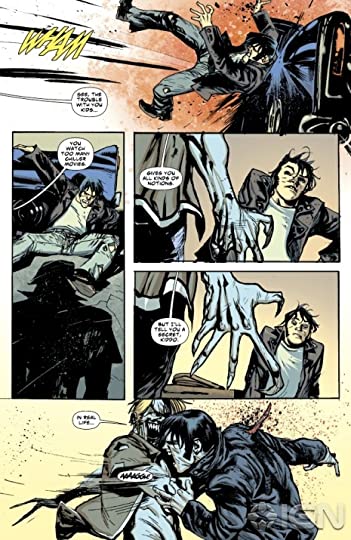 "The Beast in the Cave" fails for a couple of different reasons. First, it introduces a back story for Skinner and Book that doesn't really seem to fit any of the previous knowledge we had about the characters. Book never talks about Skinner as a brother, never mentioned him as a friend in any form. They were mortal enemies, not family. It also, though, introduces another type of American vampire, Mimiteh, who has different powers, it seems, than Skinner and Pearl. We're told that the land creates the vampire but, by that logic, should Mimiteh and Skinner be of the same geological bloodline? Something is off here and the book doesn't answer any of these issues.

Thankfully, after this three-issue arc, we get into much better stories. The second feature is "Death Race", a four-issue story focused on 1950s greaser Travis Kidd. Travis, at a young age, witnessed vampires (European ones) slaughter his whole family. This set him on a course to kill all vampires he found, and he became very good at his task (as the Vassals of the Morning Star put it, Travis was the best independent hunter of his time). His goal was to get revenges against the specific vampire that had caused his family to die, the vampire the other vampires referenced: Skinner Sweet. Somehow Skinner was the ring leader (at least, as far as Travis knew) and that led him to track down Skinner (despite what the Vassals wanted) so they could have it out, mano-a-vampiro.

This story works for a couple of reasons. First, it's a tale far removed from the main meat of the story. Although Skinner, and the Vassals, appear, Travis isn't tied to them so what he does feels free and distant from their concerns. We can just enjoy a new character, having his own adventure, as he kills vampires. Skinner showing up in the 1950s also adds a new wrinkle. The end of the story reveals that, somehow, after the events of Taipei, Skinner wound up as a servant of the Vassals. The story's finale raises some interesting questions for the larger plot line, but it does it in a way that doesn't make it feel like the main storyline is intruding, or that its creaking apart at the seams. It's a simple tale, but an effective one.

Finally, the last story is a two-issue tale of vampires... and more. "The Nocturnes" gives us another new character, Calvin, an African-American who is also an American Vampire. Working for the Vassals as a Taxonomist, Calvin goes to various places around the country (and, presumably, the world) studying new species of vampires as they rise up. He took a side-trip to Alabama, though, to spy on his brother, a singer with a fairly popular doo-wop group, who was in town to play a country fair. Although Calvin wasn't supposed to see is family ever again, he just wanted one glimpse for old time's sake. 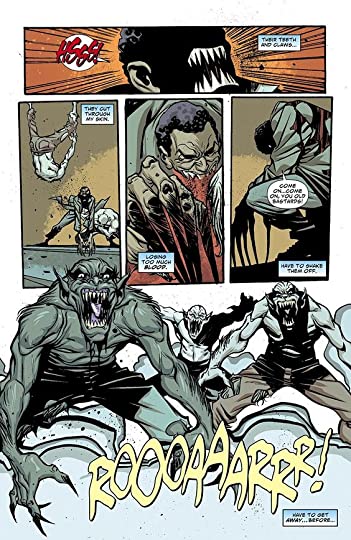 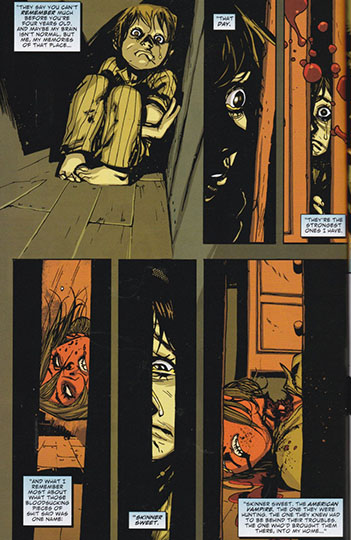 As it turned out, Calvin arrived on the scene at the right time as his brother's group had been invited to that small Alabama town as part of a trap. The local good old boys liked to invite Black musical groups down so they could listen to their music... and then kill them. As it turned out, these old men were actually vampires, a type of species that were, functionally, werewolves. They'd been killing African-Americans for years and, had Calvin not show up, his brother's group would have been next. Naturally the werewolves are defeated and Calvin's brother (and his whole group) are saved so they can go on to play their show, safe and sound.

This tale is interesting because of the promise it makes for the series. While adding another new American Vampire to the fold, the previously unseen Calvin (who, we have to assume, we'll learn more about soon) it also gives us a taste of the larger vampiric community as a whole. If werewolves exist, and they're considered vampires here, what other creatures might we see in time. Already we have vampires and ancient ones, dhampirs and now werewolves. What's next? Ancient Egyptian vampires that are actually mummies? Weird Frankensteined creations of vampiric parts? The potential opened up by this story is more than the story itself addresses, but it adds a new layer to what could come.

While this fourth book doesn't exactly have focus -- it's three tales from three time periods and three different locations in the U.S. -- it does introduce a lot of neat ideas. Plus, it has two really cracking tales with solid new characters. Not only do the stories work here but the potential for the future they add to the series is even more interesting. That makes Volume 4 one of the better entries in this series so far, sending American Vampire, at least for now, on a solid up swing.