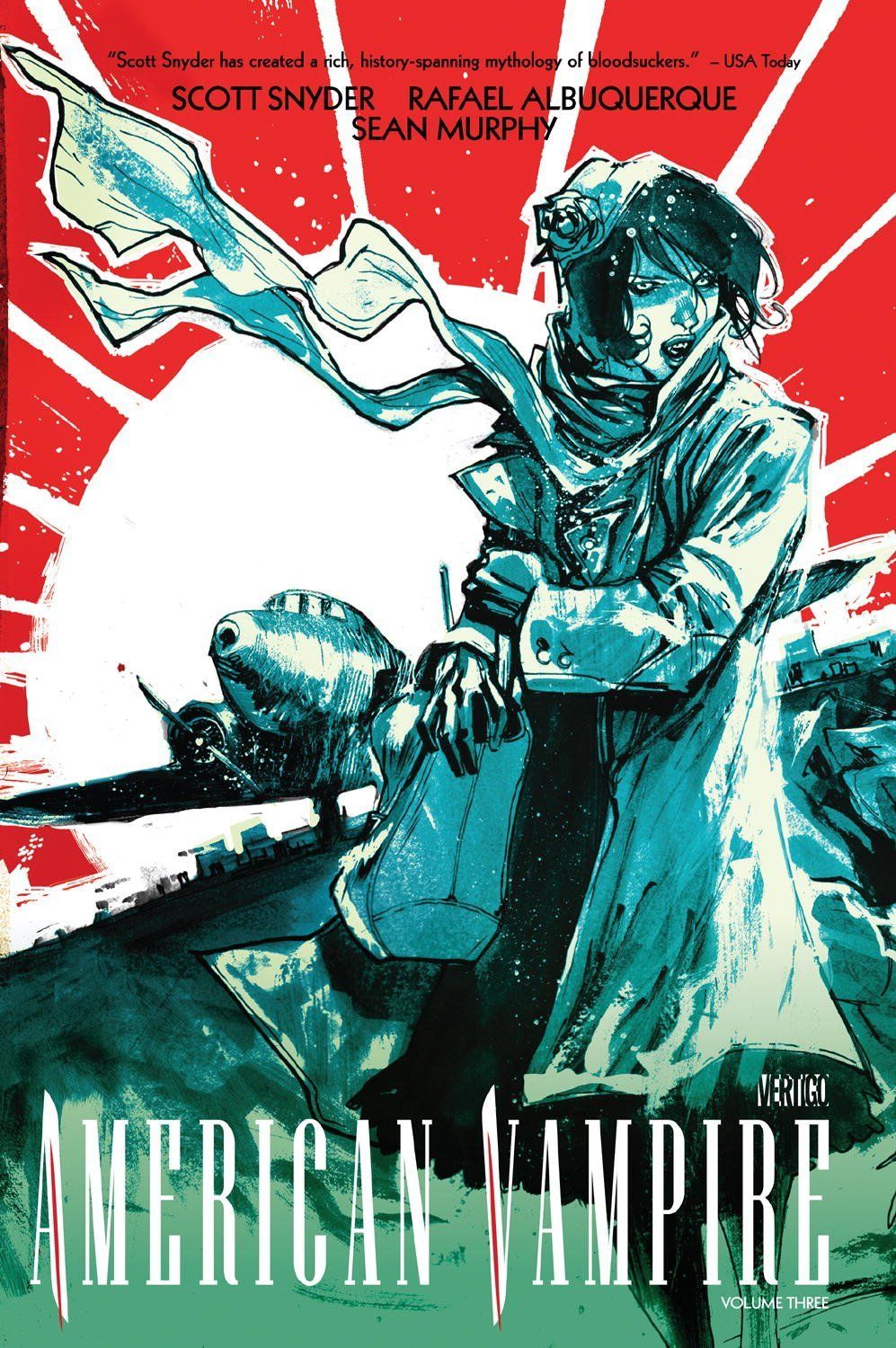 When it comes to the concept of American Vampire I like the series a lot. I like the directions the books go, exploring vampirism from multiple angles. More often than not vampires are depicted as one-dimensional beings, horror beasts that act on instinct and evil. While there are some creatures like that in American Vampire, there is generally more nuance than in the classic Universal and Hammer films. There can be good and bad vampires, half-breeds and avenging night creatures. Vampirism in the series is a spectrum and the series takes a number of interesting angles as it explores all these ideas.

That said, in practice sometimes the concepts of the books don't make for very interesting tales on the page. That's very much an issue with this third volume of the series. American Vampire: Volume 3 is absolutely packed with brilliant ideas worth exploring, but to get through all those ideas in two packed stories across 13 issues, the series really has to cram everything in to the point that the nuance, even the joy, of exploration gets sidelined. The creators have a lot they want to get through in the series but sometimes their ambitions don't really line up with the realities of quick storytelling in the comic book format.

After a brief prologue story with Skinner Sweet watching a Wild West show telling a fictional account of his own life, and the lives of many of the men (and women) that he knew (with the show meeting an expected gory end once Sweet gets involved), when then cut to the real meat of the book, the first of two long-form tales for Volume 3. The first story, "Ghost Story", finds Henry Preston, husband of vampire Pearl Jones, heading over to the Pacific Theater to fight in World War II. With his knowledge of vampires he makes a good addition to a military raiding team backed by the Vassals of the Morningstar. The goal: to see what vampiric activity is going on in Taipei and deal with it, whatever the costs. Unexpectedly, but well within the rules of vampirism as set out in the series, the Taipei vampires are a new breed, hideous creatures stronger even than the American breed, with a bite so infectious it changes men in minutes, not days. Henry gets stuck in the middle of this, with no way out, and Pearl has to venture across the pond herself to save him.

This is then followed by the second long-form story, "Survival of the Fittest". Here we follow Felicia Book, daughter if James Book, and Cash McCogan as they search for the cure for vampirism. This leads them to a fortified outpost deep in the German Empire. There they meet, as supposed American sympathizers, with the German officials there while, secretly, working to aid the scientist working them in his escape from the Germans. It all culminates him the scientist raising up an ancient race of vampires, massive beasts who may be among the oldest vampires ever, so they can fight the German Nazi Vampires and, just maybe, turn the tide of the war. 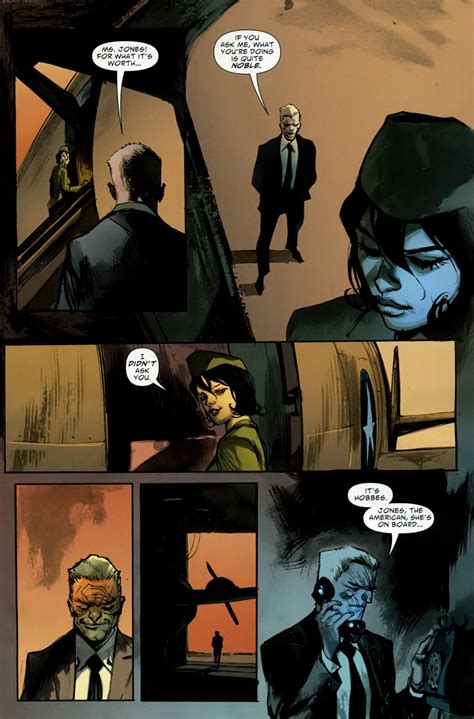 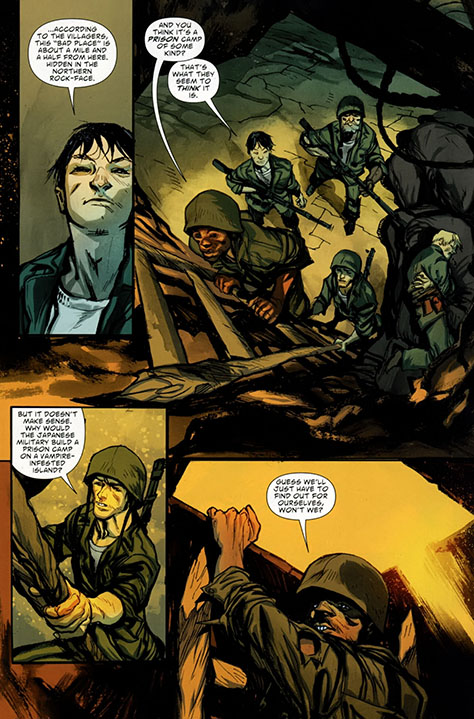 I have to admit that, all around, this is probably the weakest volume in the series so far. Although each story has ideas I like (well, okay, not the shot prologue tale, "Strange Frontier", as that was just pretty throwaway) I don't really feel like they come together in any truly satisfying way. Maybe if one or the other of the stories had gotten even greater focus they might have done better, but the volume feels divided without enough time to flesh out what actually works here.

In the first big story, the Taipei vampires are the real stars of the show. Henry is, frankly, a bit if a wet shirt without a whole lot going on for him character wise. Pearl I like better, but she's the B-plot to Henry's dominant A-plot and doesn't get enough time in the pages to really show her true stuff. The book keeps her, and also Sweet (who sneaks along on the mission and then is put out of commission pretty quickly by the Taipei vampires), in reserve, and then just doesn't do much to justify their inclusion.

I like the design of the Taipei vampires, reptilian looking and very scary. These creatures could have been an awesome force of horror in the book had they been given more time, but even then the book cuts around to focus on throw-away Vassal characters (who don't get a lot of fleshing out and then die before they matter), Japanese military folk (who all seem like an amorphous, evil blob of military stiff shirts), and the Taipei vampires that nothing ever really comes together. Guys going into a war zone, fighting evil creatures, and then running out of the jungle to tell their tale could have been cool (in a very Predator kind of way). "Ghost War" doesn't manage that feat at all.

Meanwhile, "Survival of the Fittest" feels like a story put into the book because it's a chronological anthology and you can't cover World War II without Nazis. Nazi's plus vampires seems to be the whole reasoning for this story for as little actual storytelling as it actually manages. Now, in fairness, the heroes of this story, Felicia and Cash, are interesting. Felicia was infected when Sweet killed her mother during birth, passing on some (but not all) of the vampire genes. She's something of a half-vampire, a a new thing worth exploring. Meanwhile, Cash has a baby boy that was infected in the womb by Sweet and has been a vampire since birth. Finding the cure for vampirism would help the little boy, giving us real stakes for the story. 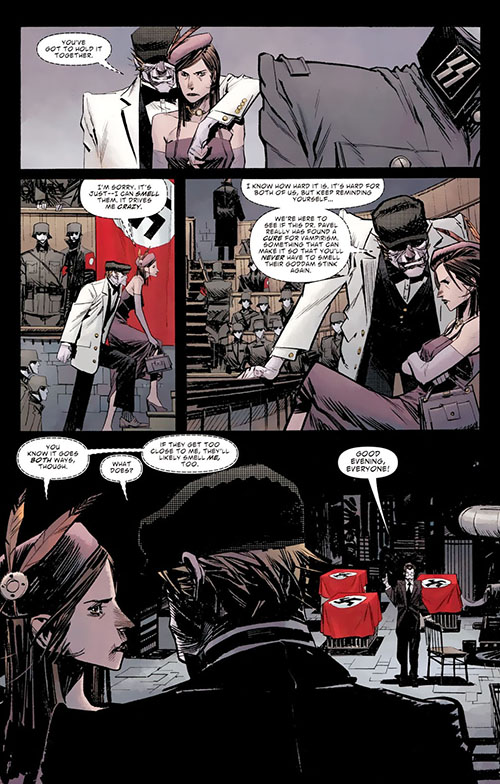 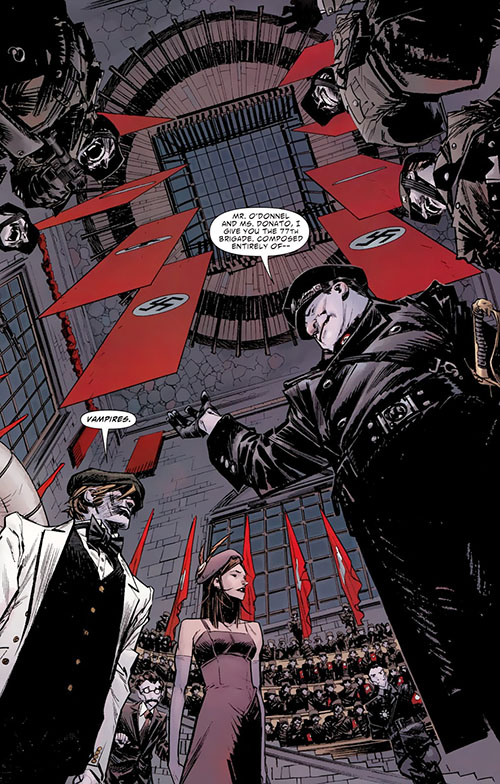 It's only when we actually get to Germany, though, and the Nazis come into play, that the book actually falls apart. There isn't anything here we haven't seen before, in media like Indiana Jones and the like. Nazis are bad, even more of monsters than vampires, and somehow that makes them the perfect ally for vampires. It's a simple idea, and too easy of a swing. I would have liked something more out of this than a rote tale of Nazis and vampires, but Volume 3 didn't really have much more to offer.

The one cool thing it does bring in are the ancient, giant vampires. They don't get much time to shine here but, hopefully, they'll appear again in a future volume so we can appreciate them further. The do cause a lot of damage, and give our heroes time to escape the Nazis, but that's about as much good as the ancient ones are for this time around. Cool in concept but lackluster in actual execution.

Which is what I've said already in this review before. There are really great ideas here, cool concepts that play on the groundwork of American Vampire up to this point. What the book lacks, though, is a good story to tell that actually matters. This volume feels more like table-setting than a real set of stories, so hopefully in future volumes the series can really bring it together and go somewhere. This far into the books we actually need some direction, some sense that all these cool ideas are going somewhere. Volume 3 doesn't provide that so we'll just have to hope it comes together in the later volumes.