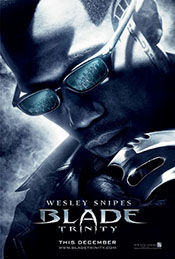 Sometime after the events of Blade II, Blade (Wesley Snipes) and Abraham Whistler (Kris Kristofferson) are back in the states. While on a vampire hunt, Blade kills a Familiar (human servant of the vampires). This action is caught on tape, and the vampires are able to frame Blade for murder (although, really, not so much framing since he really did kill the guy). The cops show up at Blade HQ, Whistler is killed by the cops, and Blade is captured.

Down at the police precinct, the cops reveal that they are actually working for the vampires, and that the vampires are going to take Blade away to do unspeakable things to him. Thankfully, Blade is rescued by Hannibal King (Ryan Reynolds) and Abigail Whistler (Jessica Biel), daughter of the now dead (again) Abraham Whistler. These two are part of a vampire hunting organization, the "Night Stalkers".

Freed from the police, Blade and the Night Stalkers have to deal with a new threat: the vampires have decided they need to permanently get rid of Blade, so they plan to dig up the oldest and deadliest vampire of the ages, Dracula (Dominic Purcell). Dracula is more powerful than any vampire, possibly even more powerful than Blade. The vampires hope that Dracula will kill Blade, and that after his death, the vampires can then go back to being the top dog in the evolutionary food chain (ignoring great white sharks, which are always the top dog).

Can Blade and the Night Stalkers stop Dracula? Do they have any weapon in their arsenal capable of ending the battle with the vampires once and for all? 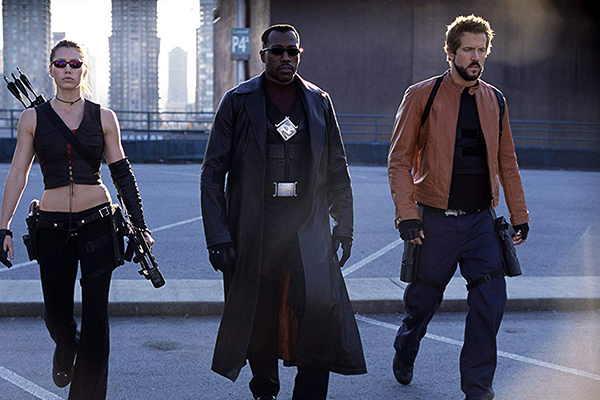 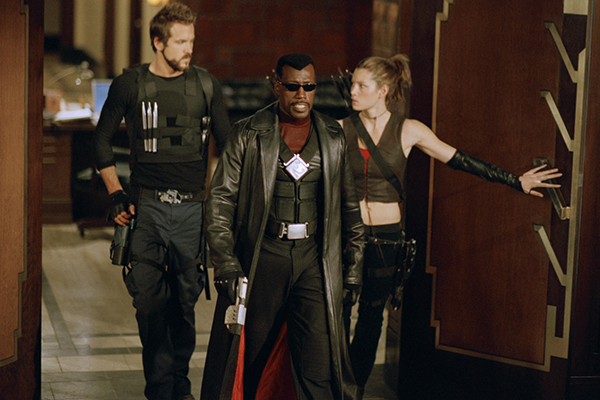 Unlike the second movie, Blade: Trinity does have a fairly cohesive, engaging plot. There's still a fair bit of "Blade runs around doing things randomly" that all three movies have had, but at least this time it doesn't feel like a dungeon crawl. In fact, for portions of the movie, Blade actually takes on the Whistler role by training the Night Stalkers to be hunters. It's a good change of pace for the character, and adds a new dynamic to the movie.

Even with Dracula included into the mix, this is definitely a Blade movie -- the focus is certainly on Blade. Thankfully, Wesley Snipes is once again in fine form (not phoning the performance in like he did in the second movie). Blade isn't a deep character, so it takes a strong actor to make an otherwise shallow, one-note character believable and interesting. Wesley brings the necessary level of menace and cool to the proceedings, making Blade into the fine vampire killing machine he should be.

Ignoring the fact that the Dracula in this movie isn't like the classic Dracula we always see in flicks, I rather liked this version of the character. He's not quite the suave, romantic character Dracula usually is portrayed as, but that works. The Blade movies haven't been about romantic vampires, so having one here would seem out of place. No, what Purcell brings to this Dracula is a truly menacing form; one you can believe has lived for ages and has seen it all. He's dark and imposing, ordering people around and making sure everyone believes he's the big daddy of the vampires.

If there are any weak performances in the movie, they would certainly be the two lead Night Stalkers. For one, Jessica Biel doesn't have much to do in her role as Abigail Whistler, and while that's a fault of the script, sure, it doesn't feel like she cared much to expound upon the character at all. She seems a little bored by the proceedings, especially the bit that requires her to pay attention to the story. Her performance, lack thereof really, is especially troublesome when you take Ryan Reynolds's performance into account. 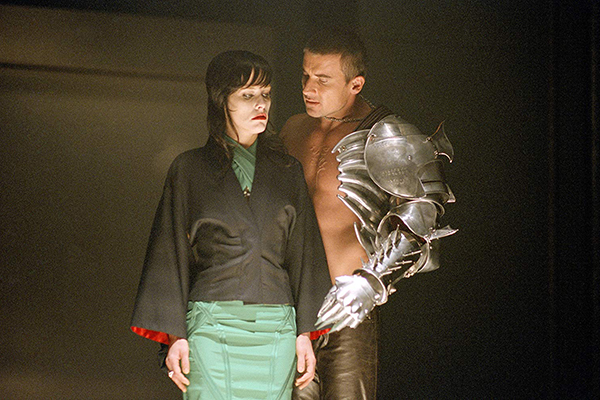 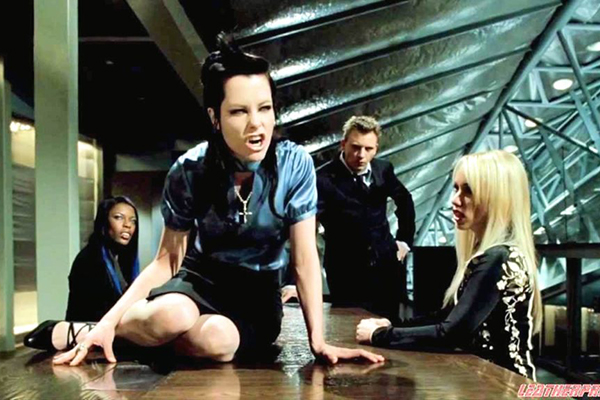 With Ryan, who played Hannibal King, he was allowed to add as much to the proceedings as he wants. It certainly makes the character feel like he's Ryan's (so at least he's engaged in the character and doesn't seem bored). Unfortunately, here there's just too much Ryan in Hannibal. Hannibal doesn't seem at all menacing. He's a goofball, silly and harmless -- not something you'd expected from the leader of a vampire hunting group. Ryan pulls you out of the movie every time he's on screen. Whenever he's around, it's Hannibal King's Laugh In.

Thankfully, the action is still pretty good in the film, although there isn't as much of it. I can think of about four real set pieces, which, in the span of an hour and a half, is a little shallow for an action movie. All of it is filmed very well (not too much obtrusive CGI), but there just could have been much more of it (this is especially evident on repeat viewings).

Blade: Trinity is not the strongest entry in the series. But then, none of the movies are that great on their own, so it's not very easy to recommend this to anyone outside of the vampire lovers. Even then, those looking for a romantic portrayal of Dracula are looking in the wrong place. When Dracula's on-screen, it's his show. When Hannibal is on screen, it's his movie. There just isn't a lot of time for Blade; and really, I think that's the biggest flaw with the movie.