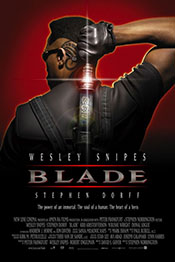 Years ago, a pregnant mother was attacked by vampires and left for dead. Although she died in the emergency room, she gave birth to her son -- a boy infected with the vampire virus in an unusual way. His unusual birth gave him a sort of in-between status -- half human, half vampire -- who had the best of being a vampire (the speed, strength, and healing factor) but none of their weaknesses (garlic, silver, daylight, black lamé, etc.).

Well, almost none of their weaknesses. He still had the hunger, the need for human blood, which he sates with a serum engineered to control the hunger instead of drinking blood.

Being as strong and as fast the the fang-heads, this protector of humanity, Blade (Wesley Snipes), goes on a war against the vampires. Aided by his friend and father-figure Abraham Whistler (Kris Kristofferson), who builds the weapons Blade uses, Blade is the one man best suited to fight the vampires.

The vampires have a plan of their own, though. Deacon Frost (Stephen Dorff) is a vampire who wants to rule the vampire world. He knows that the only way to really do this is to be better than not only the other vampires but Blade as well. He unearths a vampire rite that could make him stronger than any creature on the planet. Will he be able to pull off his plan before Blade catches up to him? 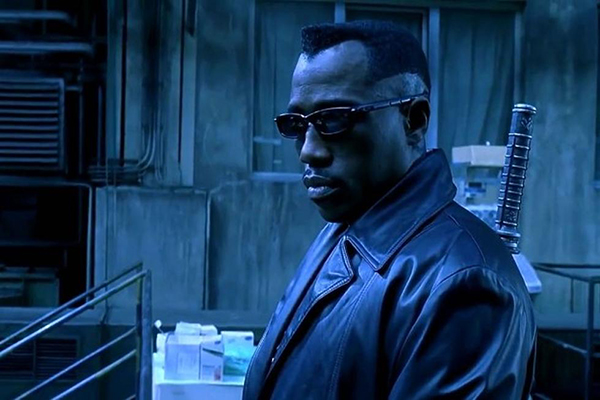 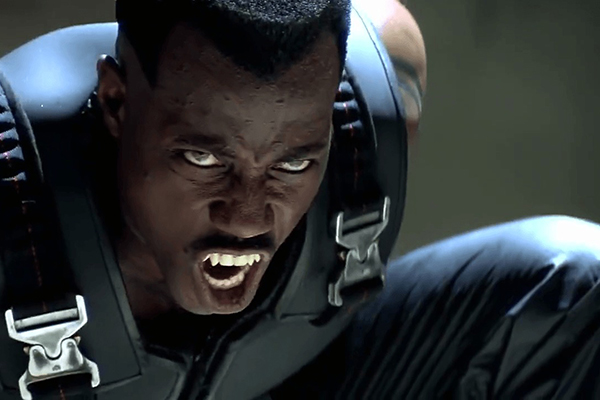 From the synopsis alone, it can be seen that Blade is not your normal vampire movie. For one, it's more about the hunter than the hunted. While the vampires are there to give menace to the movie, and serve as a climactic foil, the movie is about Blade.

Thankfully, Wesley Snipes does a fine job of playing the Blade character. He's cool, collected, an imposing force on screen, capable of being vicious and menacing when the scene calls for it. While the story might not always engage you, credit must be given to Snipes for always making his scenes watchable.

The same cannot be said for Stephen Dorff, who makes his character more slimy than serious. Dorff's character is supposed to be smart, evil but slick, but Dorff never manages to make him anything other than weasely, nasty, and just plain unengaging.

To Dorff's credit, the biggest problem with the movie is the plot. About halfway in, the movie shifts from an origin story to a techno-babble laden movie about the Great Vampire Project. It's at this point where the story basically devolves into "Blade runs around a lot, fights vampires, rinse and repeat". After 15 minutes or so of this, you just stop caring -- even with the twists they try to throw into the movie late in the game. 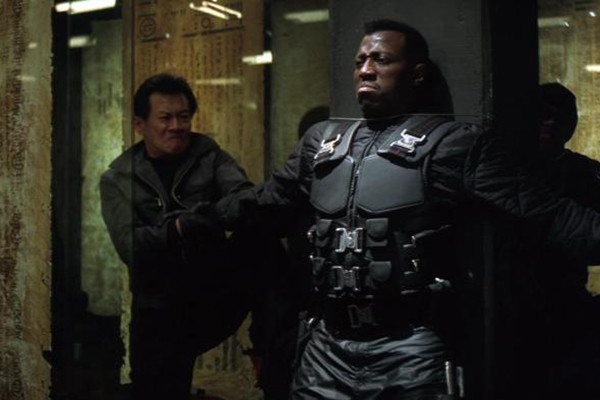 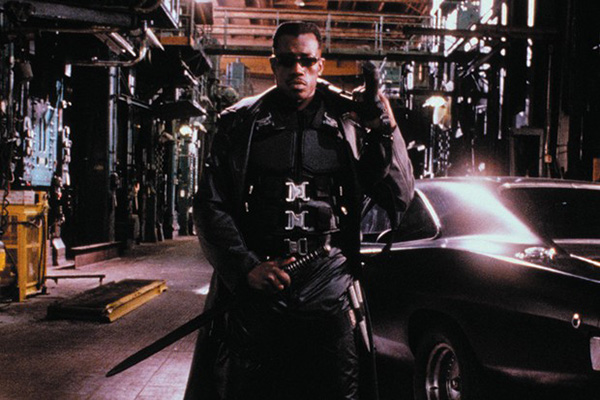 The end battles are just lame, too. I won't put out any spoilers, but I will comment that Wesley Snipes is a good on-screen fighter, but most of the battles at the end of the movie are CGI heavy affairs that don't showcase any real fighting. As if that wasn't bad enough, the CGI used in these sequences is terrible (even for when the movie came out, 1998, the CGI was bad -- time hasn't helped it).

While the movie is fun at times, good popcorn that you don't take too seriously, you end up wishing that the movie could have matched Wesley Snipes's performance. It could have had power, gravitas. Instead it runs out of steam and comes to the end with a whimper.