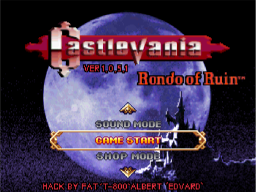 As the name would imply, this game is a sequel to the events of the Castlevania Dracula X: Rondo of Blood titles, coming five years after the events of Symphony of the Night. But instead of focusing on perennially beloved hero Alucard we instead get an adventure for Richter Belmont and a grown up Maria Renard. And it works, in large part because these two characters compliment each other and are fun to play with.

Making a Richter/Maria hack out of Portrait of Ruin does make a fair bit of sense. That Nintendo DS game probably has the best bones of any game in the series, featuring an adventure that is tightly plotted but expansive enough to allow for a lot of exploration. Plus, it already had a two-character dynamic at work in the game, and Richter and Maria were already secret characters locked within the game (although that Maria was the child version). It makes a fair bit of sense to make them the primary heroes this time around, and that leads to a pretty solid adventure, all things considered.

Up front its worth acknowledging that along with editing a fair bit of the game (although not everything, which we'll get to in a bit), creator Edvard did add a little extra challenge to the game. Bosses seem a little more buffed, there are some tricky traps in various places in the game, and some enemy placements are pretty rude. None of it is to the point of being impossible or obnoxiously hard, just know that you can't come into the game expecting a Portrait of Ruin-level challenge. If that game was a 6 on the difficulty scale I'd put Rondo of Ruin closer to a 7.5. It's not bad, but you do feel the challenge at times. 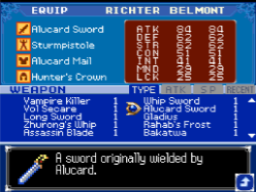 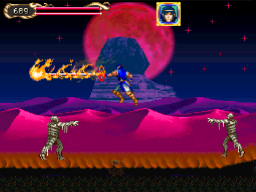 That's not necessarily a bad thing, mind you. There are times where the creator has set up a series of devious platforming challenges and while those can be quite tricky defeating them feels very sweet. Taking Richter or Maria and having them jump, jump, back-flip, and then toss a warp stone to reach an out-of-the-way place is its own reward, even if what you get at those locations may not always be as good as the gear you currently have. Part of the fun of the game is in mastering all its challenges.

When it comes to Richter and Maria, the two control quite well... once you find their power-ups. While all their abilities came fully unlocked in Portrait once their mode was ready, here they start of as basic scrubs, about as maneuverable as the original heroes in the game. However, all the moves you expect to get -- double jumps, partner team-ups, slides, acrobatics, and everything else -- is all hidden in cubes around the stages. By the time you've played through the game and are up against Death and Dracula your two heroes are going to feel just as powerful as you expect.

Having been built over top of the original heroes, Johnathan and Charlotte, Richter and Maria do get to use the full compliment of upgrades and items available in the game. This is, of course, the biggest change from Richter/Maria mode in the traditional game as those two were a pair of glass cannons that couldn't really get anything to add to their arsenal. Now Richter will find a bunch of hidden whips and other items in the game while Maria will be able to collect the various magic books, and even an upgrade to her doves, over the course of the game. This is the right kind of upgrade for the game and feels much better for the heroes. Make you wish this had been the version of the characters we got in the original game.

It really is a treat to take the two heroes through their own adventure. Richter is all power, as you'd expect, with all the sub-weapons you'd expect. I much preferred Richter with his whips, and one of the traditional sub-weapons like the axe or the cross, to any of the other equipment that carried over from Portrait. Maria, meanwhile, feels rather toned down. Her starting doves are pretty weak, and while she can use Charlotte's books the range on those isn't as good. That said, once you get the dove upgrade Maria really comes into her own and is an absolutely blast to play. The balance between the two characters does feel off -- Maria is much better in a support role here -- but that's a minor quibble. 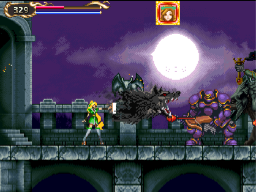 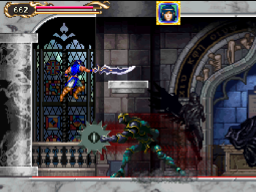 The bigger issue I have with the hack is that it doesn't always feel like it goes far enough. Early in the game the hack makes a ton of changes, not only to level layout and item placement but also editing in some puzzles to keep you engaged. Nation of Fools is a great example as the creator edited in a bit of a teleporter puzzle that makes the map even more twisty and interesting. But by the late game it feels like Edvard ran out of steam, not changing the levels nearly as much. There are still some tweaks but not to the degree that I really noticed or was as engaged.

And then there's the bosses: all the bosses in the game are basically the same as in Portrait. Yes, Brauner has been recolored with a red suit and called "Olrox", but that's the extent of his changes. The sisters, Stella and Loretta, are here as well and their inclusion feels really weird. I bet its because they're a key trigger and had to be in the one room in the game. I would have liked it better, though, if they could have been moved to the bonus painting at the end game and a different boss moved into their arena instead. It's little things like this that keep the game from quite working as a sequel to Dracula X.

Still, a lot of great work was put into the hack making it very fun to play. If it's not perfect now it still could get upgrades. This is a hack to check out and keep an eye on, for sure.