While the Belmonts are well known for their classic vampire hunting abilities, other heroes in the series have been designed to use alternate powers and abilities, compliments to the Belmonts that make them each feel unique and interesting. Certainly none of the additional heroes in the series have felt more unique, interesting, or for that matter powerful than Maria Renard. Introduced in the adventure of Richter Belmont, Castlevania Dracula X: Rondo of Blood, Maria saw Richter's vampire hunting weapons and raised him a collection of cute, fuzzy animals, it was certainly something.

Of course, calling them cute, fuzzy animals isn't really the whole story. While they certainly were cute in their first appearance in the series (and for many other appearances as well), these little animals were actually representations of the Sacred Beasts, powerful animals from Chinese mythology who acted as the guardians of the four cardinal directions. They were, in fact, constellations that sat along the elliptic of Earth's orbit, guarding the planet as it made its journey through the stars.

In traditional mythology these animals represented not just the stars and the directions but were also assigned other properties as well, from seasons to colors to Chinese elements:

Of course not all of these properties made it into the games. While the animals are often depicted with their corresponding colors, and sometimes show as constellations when summoned, other aspects were left by the wayside. The White Tiger (or the cute little white kitty, if you will) traditionally has the property of metal but in the games sometimes has electricity element applied. You can see the logic behind this even if it's not a one-to-one comparison.

About the Sacred Beasts:

Depending on the game the Sacred beasts either functioned as sub-weapons for Maria to use (at the cost of hearts) or summons that could be performed (via controller inputs). The more traditional use within the series is as sub-weapons, appearing in not only Castlevania Dracula X but also in Castlevania: Portrait of Ruin, Castlevania: Harmony of Despair, and the Castlevania: Symphony of the Night portion of The Dracula X Chronicles. 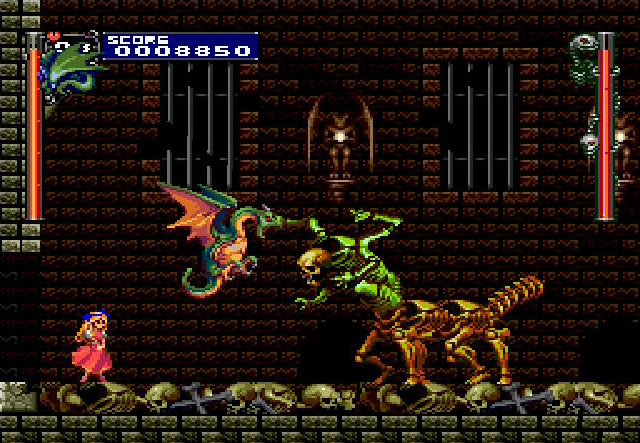 Meanwhile, the summons could take more subtle forms. In the Symphony of the Night port for the Sega Saturn, Castlevania: Nocturne in the Moonlight, each summon could be brought forth to imbue Maria with special powers, from healing to added defense to overwhelming attack force. And then, in Castlevania: Judgment, and again in Castlevania: Grimoire of Souls, the various animals imbued Maria with power on her basic attacks, augmenting her basic abilities to great effect.

The Powers of the Sacred Beasts

The cat's sub-weapon attack is similar to the later "Student Witch" souls that hero Soma Cruz could use. Maria would send out Byakko, a little kitten that would run along the ground, damaging all enemies it touched.

When summoned in Nocturne, Byakko would allow Maria to shoot out a massive gout of flames from her hands, dealing great damage across the screen.

The basic power of the tortoise is defense. When used as a sub-weapon, Genbu would cover Maria in a protective shell (with only her feet sticking out), letting her shrug off attacks for a time. Of note, in harmony of Despair, Genbu acted as a defensive boost instead of as a straight shell over Maria. This was likely because a complete damage nullifier would have been too broken for the style of game play in that Online title. 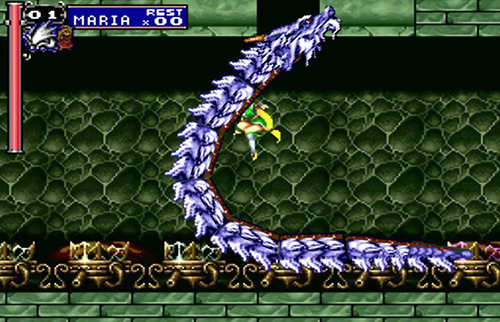 When summoned in Nocturne, Genbu would grant Maria some healing, a benefit since Maria in this game wasn't able to use consumable items to heal.

Similar in intent to Byakko, although different in element, damage, and cost, the basic attack of Seiryuu was to fly out from Maria's hands, traveling across the screen, damaging enemies it touches as it swooped along.

When summoned in Nocturne, Seiryuu would appear as a wyrm on screen, rotating around and dealing constant damage to everything it touched. The player could control this attack, spinning the dragon around to great effect.

Maria's best vertical attack, Suzaku actually created two birds when used as a sub-weapon. These would fly up and out at an angle, dealing fire-based damage, before flying back to Maria's hands. Interestingly, in the Chronicles version of Symphony, the flying birds were replaced by great flaming wings that spread from Maria's back, rising vertically. Their area effect was similar to their more traditional form, although the wings were arguably much cooler.

When summoned in Nocturne, Suzaku would appear as an owl familiar, following Maria around for a time to attack foes.