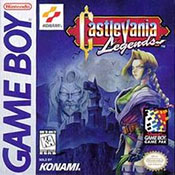 Castlevania Legends is the third Castlevania game for the Game Boy system, released during the system's twilight (the Game Boy Color was already out, yet Castlevania: Legends was released for the original version of the portable). Making its debut after Castlevania: Symphony of the Night, Legends echews from the explorational style of Symphony, instead going back to the Game Boy-style of gameplay -- gameplay that hadn't been seen in a Castlevania game in eight years. At the time of its release, it was already considered "dated" and "too retro", slights against it that were fair at the time, and even harder to ignore now.

The game introduces Sonia, thought (at the time) to be the progenator of the clan. Legends serves as a prequel to all of the Castlevania games and stories that existed at the time of the game's release. Of course, eventually Castlevania: Lament of Innocence came out, and the events of Castlevania: Legends faded from the gaming community's collective memory (and was removed from Castlevania continuity).

Sonia comes to the party with her trusty whip, which she whips with her opposite hand (interesting if you're one of those people that cares) like her other Game Boy relatives. She also has a special "Burning Mode", kind of like a berzerker rage that grants temporary invincibility and ass-kicking prowess. Additionally, located in each stage is a special weapon (the sub-weapons of the Castlevania series: dagger, axe, holy water, pocket watch, and cross). Gathering all the subweapons unlocks the game's true ending, but you don't actually use them in the game. Along with the aforementioned "Burning Mode" are "Soul Powers" which grant you random attacks and effects you can activate (for hearts), taking the role that your sub-weapons would normally serve.

The entire game has an anime flavor to it, as the character designs are done in that style. Sonia herself vaguely resembles Joan of Arc (or Doris from Vampire Hunter D). As a nice touch, all in-game dialogue features character portraits (much like Symphony) -- again, with a heavy anime influence. Unfortunately, most of the rest of the sprites are uniformly dull, and oft times repeated. The whole look of the game is comparable to the uniformly drab Castlevania Adventure (not something you want to aspire to).

There isn't a lot of variety to the game, either. Sonia will have to play through a grand total of five stages (six if you count a special hidden one that has the last sub-weapon, and thus is crucial to get the best ending). It's one of the shortest games in the series, only beaten out by Adventure. And while it is nice to see faithful black & white recreations of Castlevania hallmark stages (the Mad Forest of Monsters, the Grand Hallway, the Clock Tower, the Inner Quarters, and the Dungeon), uninspired level design keeps these stages from being at all interesting.

This game suffers from a number of stumbling blocks it should not have even had to have dealt with. Like Adventure the game is ploddingly slow. Sonia Belmont's in-game sprite (not her dialogue portrait) is an androgenous collection of pixels, and she walks as if her feet were stuck on something (classic Belmonts had the same issue in their various NES and Game Boy iterations, but again, those games came out years earlier). Even her jumping could have been improved upon by a lot. These flaws could have been avoided if the developers would have just looked at the previous Game Boy releases and learned from them (or, more specifically, learned from the mistakes instead of making the same ones again). As a result, the game suffers from cheap enemy placement, slow control, and many. many moments of total frustration.

The graphics in the game need a large amount of help. Apparently, the developers did not hire a decent team of tile/sprite artists -- the game is graphically mediocre. It is bad enough that some people have gone and hacked the game just to make it look better. The developers displayed a degree of lazyness I wouldn't have expected from Konami. It just feels rushed, no doubt.

To note, playing this game on a Super Game Boy (an attachment for the SNES) will bring up a nice castle wallpaper behind the screen. This doesn't, however, save the graphics from being sub-par.

The sound in this game is actually one of the better parts of it -- it features a nice mix of Rock and Classical. Unfortunately, you'd need to have a keen ear for chiptune music to be able to appreciate it. The music composition is somewhat similar to Castlevania: Harmony of Dissonance, but with more rock-like instruments and a lot less channels. The remix/arrangement of "Bloody Tears" is one of the best tracks from the Game Boy Castlevania series. The whole soundtrack is definitely worth listening to, if you're a fan of game music.

Sonia walks like molasses, and her adversaries are much faster and have very odd flight patterns. Even the first enemy in the game, a weird treant creature, will most likely end up hitting her because of its location and its erratic movements. Bats, Spirits, and other creatures will have you pulling your hair because of their ability to knock you off of platforms, coupled with their ability to respawn if you move offscreen by even a little bit.

Sonia also seems to have problems jumping, and (like every Game Boy Belmont) her whip downgrades in strength with every hit she takes. In just about every way, the game mechanics could have been better.

As should be obvious by now, Legends isn't very fun. The gameplay and the graphics are largely to blame. I like, however, that there are two endings based on whether you collect all of the subweapons (the hidden stage is also pretty cool). I also like the plot of the game, which ties Alucard to the Belmont plotline (Alucard shows up for a few cameos, and fights Sonia at one point as a way to test her, a la Protoman in Mega Man 3). These help to elevate an otherwise totally meh game. It's only okay as is, but based upon the era in which it came out (and the Castlevania games that were coming out at that time), Castlevania: Legends could and should have been a lot better.