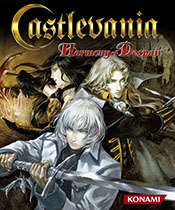 Editor's Note: For the review of Castlevania: Harmony of Despair, a complete version of the game was used, including all downloadable levels, characters, and music. Some features will be unavilable until you've downloaded all available content.

As the last game in the main Castlevania series before the Lords of Shadow continuity takes over, Harmony of Despair is, oddly, a fitting end and tribute to what came before (certainly more-so than Judgment). The game's story is... well, not much of anything. Dracula is a bad dude, heroes from across the series show up, battle ensues, and items are collected. Huzzah!

As with Judgment, Harmony of Despair is a mash-up game. In Despair, you play through various remixed Castlevania levels, exploring the entirety of a section within 30 minutes (or less). There is no pausing, there is no waiting, and there is no quick-restart if you die. You have 30 minutes, start to finish, the get through whatever level you're in, beat the boss, and get all the treasure you can. You can do this with any character available in the game -- primarily a mix of various Metroidvania characters, like Alucard, Johnathan Morris, and Shanoa, as well as a retro version of Simon Belmont, and even Getsu Fuma (from a little known Japan-only game).

At it's core, Despair is a dungeon crawler. There is no leveling, and while your character has various RPG-ish stats, the only way to upgrade is through the use of items. Various monsters will drop usable items (although you can only switch them in and out from the menu or special spots in the levels), and the bosses on Hard Mode have even better gear.

Oh yeah, and there are two modes to the game, Regular and Hard. Regular you can probably play through on your own with any character of your choosing. As a single player experience, Regular mode is pretty fun, a diversion for three to five hours or so, but the meat is in Hard Mode. There, everything does exceedingly more damage (and is much harder to kill). The only real way to make it through all the stages in their Hard Mode versions is to have a bunch of people with you... and even then, some bosses will just kick your ass. Hard Mode is for the hardest of the hard core, and it's just an absolute blast to play.

Without a true RPG system, characters are forced to collect special powers and abilities to gain true "power". Each character will find their abilities in their own ways (Charlotte absorbes spells off of enemies leveling them up by repeated collection, while Retro Simon finds his sub-weapons in tresure chests and levels them up through use in combat). The diversity of the spells and abilities is great, although no where near as diverse, by and large, as from the various character's respective games.

There are a lot of characters to experiment with, and they all play differently enough, by and large, that you can have a few different characters you'll want to play, and can mix it up depending on who all joins up with your party. Thankfully, all the items you collect in the game will be available to all your characters. You can setup your various builds, and items will be shared (even when equipped) by the various characters. It's an excellent way to run the inventory, and it rewards players for collecting a bunch of items without penalizing them from wanting to change up who they play as.

As a game presented in HD, the graphics and presentation are gorgeous. I'm a big fan of just about all the stages which, admittedly are mostly just pieces from various games that came before... and yet, my whole gripe about how all the levels in previous games felt interchangeable works as a benefit here. Levels can be mashed up and arranged from various sections of other games, and the smooth flow of everything presents a game prettier than just the sum of its parts. Of course, the HD polish does give everything that additional luster.

And speaking of extra luster, damn but if the game doesn't have a wonderful soundtrack. It's all remixes and original tracks from the previous games, but there's none of that unecessary flourish (and weirdly divergent bridges) that previous games (like Judgment) had. Plus, with the expansions, you can mix in a greater variety of music (including perfectly chip-tune-ish tracks from the original Castlevania).

If there is any downside... well, okay, there are two of them. The first is that the main game really isn't all that long. Even with all the expansions, you can play through Regular Mode as a single character in an evening, and have them pretty well leveled up within a week. Mastering all the characters will take longer, but that's if you decide you want to level them all up -- some may not strike your fancy, and that's just fine. The game has enough diversity to it that anyone can find a few characters they like. But, even playing in Hard Mode, after a few playthroughs the grind will wear. It's a dungeon crawler, and that means grinding for items over and over again. You have to want to play to the grind to get your money's worth.

And that's the other downside. While the main game will run you about $15 bucks, getting all the various extra characters (sold individually), and all the levels (sold individually), and all the music (sold in small packs), gets seriously expensive. For the kind of money you'll spend (upwards fo $60 bucks for everything) you might wish the game had more "meat" to it.

Regardless, it's still a game I find myself playing. It's short, it's fun, it obviously doesn't take itself too seriously (I mean, come on: Retro Simon!), and it's a good way to waste a little time. And hey, it actually does something a little different (instead of the same old Metroidvania). Even if you don't want to get every expansion, pick up the main game. It's a good way to spend a little dough for a lot of fun.