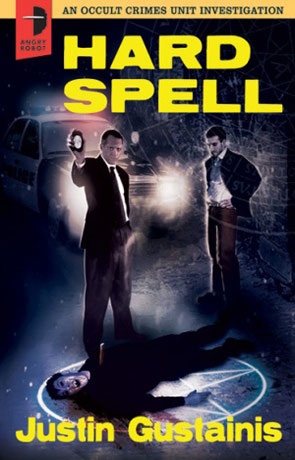 I find it hard to pick up new authors. I'm picky about the genres I read in general -- historical fictions generally bores me, as does traditional fantasy, and even sci-fi has to have a hook more than "like Star Trek but..." -- and even when I find books in a specific genre and style I like (more monsters, lots of vampires) I can still be fussy about the voice the novels are written in. Different authorial styles can annoy me, as can the way they handle their dialogue. The wrong book can instantly turn me off even if the story seems like it should be a winner.

I found series of books from author Justin Gustainis while browsing a used book store and took a chance mostly because the book promised vampires and other monsters in a modern setting. The first novel in a trilogy (that seems to have ended, sadly), Hard Spell sets up the groundwork for the world of this (short) series, and it does so in a way that didn't immediately irritate me. The book does rush through a lot of details early on just to set up the current story, but once it settles in, I had to admit that I actually really enjoyed this first novel. Makes me a little sad, in fact, that there's only three books in this series.

Hard Spell focuses on Stan Markowski, a sergeant into the Scranton, PA, Supernatural Crimes Investigation Unit. This group (sometimes called the "Spooks Squad") handles are crimes that relate to preternatural creatures, whether crimes done by them or crimes done too them. Considering that, for going on 100 years now, these creatures (ranging from vampires and werewolves to ogres, giants, witches, warlocks, and the Fae) have been living life publicly in the U.S., this makes for a lot of potential crimes that the Scranton P.D. unit has to investigate. In essence, there's always something coming in on the crime board that the unit has to solve, and that leave Markowski, along with his new partner Karl Renfer, with a ton on their plate at any given time.

Things get ratcheted up a notch, though, when a particularly grisly crime lands on their docket: a man, tortured to death, burned and mangled and clearly alive for all of it. What's weirder is that the torture was meant to facilitate information so the perp could steal something, but the actual theft (when seen) wasn't about the money in a safe in the house. Whatever they stole was something worse... something mystical. And then bodies start showing up, bodies with runes carved into them, and these bodies are vampires. Someone is brewing up something dark, and occult, and very twisted, and this kind of dark magic could spell utter disaster if the spell is finished. Markowski and Renfer have to solve this case, pronto, or the entire world could be in danger.

When I first picked up the book and started reading through it, I have to admit that Hard Spell threw up a warning flag for me, but not because of anything specifically in the book. The lead character, Markowski, is sarcastic and has a number of phrases he likes to use regularly. It's humorous and, taken on its own I wouldn't have minded it at all; at least the character has his own voice. The issue I had was that it reminded me of another series I'd read, way back, that I'd eventually stopped reading because the novels had become utter trash: the Laurel K. Hamilton "Anita Blake" series.

If you've read that series of novels (which, wow, is up to 21 books at the time of writing this review) you're probably aware that the series started off as a kind of hard-boiled crime series with a lead character dealing with supernatural crimes, the stories told from a first-person perspective (just like with Gustainis's Hard Spell), and a lead character that leans hard on catchy quips and sarcastic humor. You might also be aware that after the first four or so novels, the "Anita Blake" series went from hard-boiled monster fiction to deep in the weeds romance dreck. After six or so novels I saw where that series was going and I bailed, but any time I see a similar arc happening in a novel I can't help but worry about where the series is headed.

Thankfully, at least in this first book, those warning flags are (largely) unfounded. Yes, there are similarities between Gustainis's Stan Markowski and Hamilton's Anita Blake, although those are mostly from their voices and the limited first-person perspectives the novels take. Well, okay, and the fact that they both fight monsters. Beyond that, though, the novels are pretty different. Markowski has to work within the system (instead of being a consultant in the fringes, like with Blake), and he sticks to the cases without a lot of personal stuff getting in the way (again, unlike Blake). While he does have a few lady friends he knows and works with, for the most part he keeps everything professional, which means the book never leans towards romance stuff. I don't mind a bit of sex with my monsters, but there's a line between "novel with sex" and "romance novel", and Hard Spell stays far away from that line altogether. Like, in another district.

That, instead, lets us focus on the case itself which, in some respects, is pretty good. The idea of someone (a sorcerer, let's be clear) purposefully hunting night creatures to kill them for a nasty and evil spell is interesting. Maybe not entirely original (I think this kind of story has been done in other works before, although specific instances aren't coming to mind), but what's more interesting is the manner of it and the mystery surrounding the "why" of the matter. It takes a long time for the novel to establish what the end goal is for the spell (the titular "Hard Spell" as it were), and even then it works within the confines of the novel that was established.

All that being said, I do have to note that the end result of the spell would also lead to something we've seen before in other materials (and this is a note that there will be spoilers here for a 10 year old book): the whole point of the incantation, of killing all these vampires and then using their blood magic to fuel the spell, is so that the sorcerer can create a day-walking vampire. Specifically, the sorcerer is a vampire, one we don't meet until the end of the novel, and one that has ties to a major character in the book that also isn't revealed until near the end of the novel, but because he's a vampire he wanted to make himself into, essentially, a vampire god. This isn't new or original and, frankly, this detail did feel a little weak.

Now that we're past the spoilers I will just note that I felt like the resolution of the novel was a bit of a cheat. There isn't enough details in the lead up, for me, that I felt like I could have solved this case before hand, and any time you have a case, and clues, I feel like you should be able to at least guess at what's going on. Not here in Hard Spell, though, and that detracted from it a little for me. I enjoyed the adventure up to this point, but I wanted a case I could solve (before the characters had the details revealed to them) but this time around it just didn't work out.

That said, the world-building and character development were pretty solid. The entire first few pages of the novel spend time developing the world, having the lead character info dump everything we need to know. It's not the most graceful introduction, to be sure, but it does let us understand the version of our world we've going to see in this novel. Once the setting settles down, and we get to hang out with Markowski in Scranton, everything feels very lived in, with a fleshed out world the characters populate, one with defined rules and well thought out details. Everything has a natural cause and effect, every new item added brings depth to the world, and it all feels natural and fully realized.

The one other flaw, and this is because of the limited perspective of the novel itself, is that we don't really get as much detail about any character outside of Markowski. He's our lead, and everything that we see comes from his perspective, which makes sense in this first-person-limited novel. That said, everyone else acts as a bit of a closed book, filtered through Markowski and only given details if the lead character feels they are relevant. I want to know more about Renfer, or Markowski's daughter Christine (who, eventually, is revealed to be a vampire), or many of the other detectives and officers working on the Scranton P.D., but most details given are surface matters at best. The book could do more to flesh out these characters the way it fleshes out the world, as I still don't feel like I really know anyone other than Markowski.

All that being equal, this is a good first stab for the series. It has room to grow, and could certainly do with more work in realizing its characters, but considering other novels I've read in this kind of style (like the "Anita Blake" series), I feel like it has serious potential. If only there were more than just two more books to see this series fully realize where it's headed.