You Suck: A Love Story 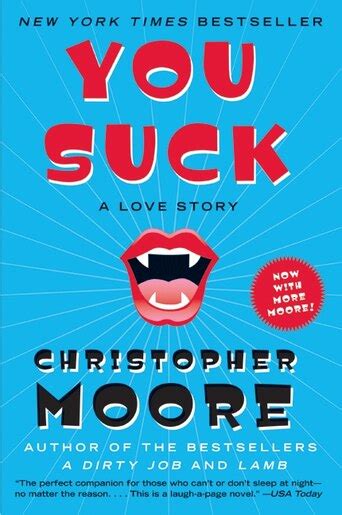 Traditionally I prefer to read books in proper order. If I know a book is part of a series I'll go out of my way to find the first volume. It doesn't generally bother me if I have to wait a few years between some volumes so long as any one book is a (fairly) self-contained story (this is part of the reason I never bothered read deep into Anne Rice's novels as one book generally ended leading to the next, and the next, and that's the same issue I have with George R.R. Martin as well). I almost never pick up a series part way in just because I don't want to be left wondering if there were any details I missed that are essential to the story.

That being said, when I saw You Suck: A Love Story back in 2008 (grabbing it when it first hit paperback) I didn't realize the novel was a sequel. The edition I had didn't explicitly say that on the cover (it referenced other novels from the author, Lamb and A Dirty Job but not Bloodsucking Fiends: A Love Story) so I ended up reading the second book of a series. I don't blame the book store for this one as this novel came out 12 years after the original, probably long after most fans forgot about the first book (although, in George R.R. Martin time 12 years is "soon").

Still, I didn't really mind the plot details I was missing and that's a credit to the book. Moore probably realized that the 12 year gap would lead to a lot of fans forgetting details of the previous novel (not everyone re-reads books over and over again) so the author goes out of the way to recap important details. He slides new reads in quickly, getting them up to speed with minimal fuss, all so he can tell a second, even more enjoyable adventure for th Vampire Jody and her willing love-slave Tommy. Or, really, the vampires Jody and Tommy now.

Picking up right after the original novel (purposefully keeping he setting of this book in the mid-1990s), we find Jody having just fed and turned Tommy. She did this not only because she was hungry (he'd had her bronzed until he could figure out what to do with her and the master vampire who turned her, who he also covered in bronze). However he'd drilled ear holes into the bronzed so he could talk to her and she was able to turn into mist and escape the bronze. Realizing all the great things you could do as a vampire, she turned Tommy, hoping they could spend eternity together.

Turning Tommy has complications, though. For starters, now they don't have a human servant, although Tommy quickly fixes this by recruiting the vampire wanna-be Abigail Von Normal (not her real name, but when you're Goth and sixteen you try too hard). He then has the girl get them a new apartment (since the cops are staking out their old one with orders the vampires are to leave town)while he and Jody have a lot of sex and figure out next steps. Oh, and while this was going on the rest of Tommy's old crew, the Animals, all went to Vegas to spend the spoils they'd stolen from the old master vampire, and spend it they did. The gave more than six hundred grand to dyed-blue hooker named Blue (because "who doesn't want to have sex with Smurfette?"), and now Blue wants more. Learning there are vampires in San Francisco she wants the Animals to help make her a vampire queen so she can live forever, rich and young.

There are parts of You Suck I really rather like, but I feel like we have to address the portions of the novel that absolutely don't work as well. Those sections are specifically Abigail and Blue, although for very different reasons. Blue's story is one that could work, if given enough time and context, but the character of Blue never really rises above a one note joke (she's a blue hooker named Blue, haha). She could be quite the villain, powerful and dark, showing the evil side of vampirism, but the book never invests enough time to really make her a proper baddie. She does the actions, and she runs around being vampiric, but as far as character development or really getting in her head the way the book does for Tommy and Jody, the novel fails to really rise to the occasion. She's an interesting idea that doesn't get the development she deserves.

That problem doesn't exist for Abby as we know all too much about her. Hell, from the point she's introduced onwards, alternating chapters of the novel are written from Abigail's perspective. The issue with Abby is that, my god, is she ever annoying. She's has her own way of talking, using bad grammar along with her own slang, making her sound like a teenager written how an adult man thinks a teenager speaks (which, in fairness, she is). She never settles down and shows anything approaching emotional depth, anything that helps her rise above her collection of ticks and annoying traits. The book, frankly, would have been better off ditching Abby altogether so it could invest more time in Blue instead.

Wisely the author does decide to sideline other characters who weren't really going anywhere. The cops from the first book pop up a couple of times here but only so they can act as motivation for Tommy and Jody to change up their living situation. Meanwhile the Animals introduce Blue into the book and then largely hand out behind the scenes until Blue needs them. Since this whole crew was never going to grow or mature the novel is better letting them sit on the bench.

What really works, though, is the relationship between Tommy and Jody. Having them both as vampires puts them on even footing, letting them share this unlife together. This gives Tommy a new perspective to explore, which he does with goofy charm. It also lets Jody explain, and explore, her own vampire senses further, giving us better insight to her as well. In the process it allows us to understand vampires in this trilogy more than we had from the first book.

Plus, honestly, the love story between Tommy and Jody works so well here. They're a happy, loving couple who (despite a few problems they still manage to have because they're both young and learning) are able to express their love and enjoy each other's company. It creates a great dynamic of them against the world, like young lovers fighting the system while they discover what it means to be together forever. Their relationship is at its best here and it's what really drives the book forward.

It's Tommy and Jody that make this book, not all the side characters that you could take or leave. I liked this book a lot, more than even the first, because of the way this novel explores the central couple. This novel is the best of the trilogy because it's focus is on these two, together, on equal footing. The first book was still exploring the setting, and the last book spends a little too long with our central characters apart, but here Tommy and Jody just get to be themselves. They're young lovers, together, in San Francisco and, for this one novel, that works so well.