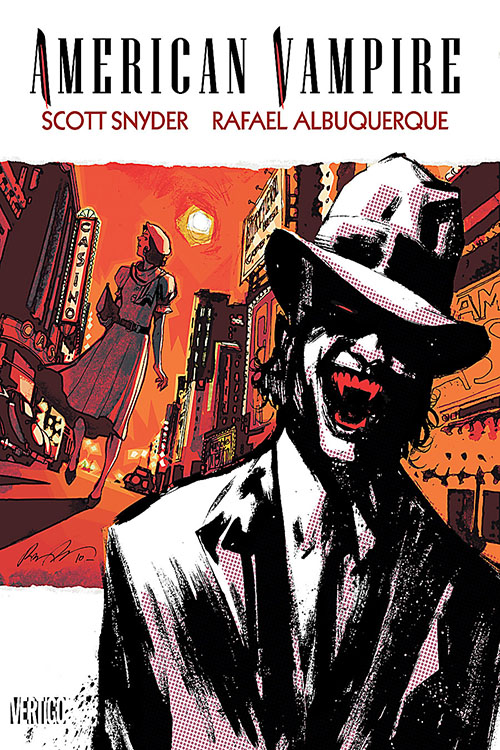 Comic books are, by their nature, designed to tell stories of varying length and complexity. This has always been part of their style, telling back-up features in books while other, larger adventures took up portions of the various issues. We saw a similar layout to the first volume of American Vampire, with a main story about Pearl, the newest vampire in America, followed by a backstory about her sire, Skinner Sweets, and his own transformation. It was a style that felt very much like the old pulpy comics of the Golden and Silver Ages (and considering that the book was set in the 1880s and 1920s, during the height of pulp stories and comics, I tend to think that was on purpose).

The second volume of American Vampire has its own bifurcated style, but not because of a lead and back-up story structure. Instead, this volume collects to separate arcs, each one following one of out main vampires. The opening feature, "The Devil in the Sand", spends four issues on an adventure that uses Skinner Sweets as one of the antagonists. The backup, "The Way Out", then dedicates two issues to Pearl Jones and her husband, Henry Preston, as they're chased by the third American vampire ever created, Hattie Hargrove. What's interesting, though, is that both stories aren't really about the lead characters from the first book, Skinner and Pearl, but a whole lot of characters around them instead.

In our opening story we're introduced to Police Chief Cash McCogan, head of the Las Vegas P.D. as he investigates a series of murders tied to the construction of the Boulder Dam (which would eventually be called the Hoover Dam). A number of investors in the Dam are dying, one by one, all via someone (or something) that strikes in the night as seems to drain away all their blood in short order. Cash, being a man of sound mind, never once thinks it might be any kind of vampire. His opinion changes, though, when he starts working with two (supposed) Federal Agents, Felicia Book and Jack Straw. These two, who actually work for the Vassals of the Morning Star, have knowledge of vampire (and the know how to kill them) and they would love nothing more than to find the creature responsible for these killings and take them out. And if, in the process, they can find a way to eliminate criminal mastermind Skinner Sweets, who is running much of the illegal trade in Las Vegas, then all the better.

Then for our backup, we find Hattie Hargrove, trapped in a dungeon after seemingly being killed by her one-time best friend (who, it should be remembered, Hattie betrayed near the end of Volume 1), Pearl Jones. Instead of dying, though, Hattie was just left scarred and weakened, in a perfect condition for the European vampires to capture her so they could test every single substance they could find on her, one by one, while she was trapped, chained up, in a basement who knows where. She does eventually turn the tables on her captors, escaping into the light of day many, many months later, with only one though: revenges on Pearl. Pearl and her husband, Henry, meanwhile, had found a small place out in the north country, living the quiet life. However, when her husband, who used to play guitar on the road, tries to reignite his career he finds himself the perfect prey for a band of vampires, which forces Pearl to step in. They will have to fight off all the vampires while Hattie slowly tracks them down. 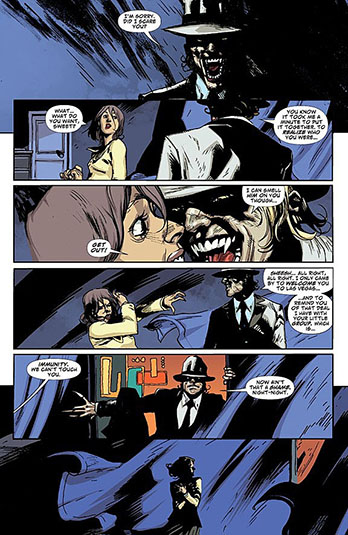 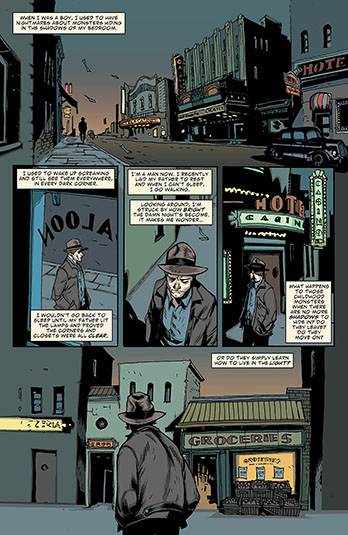 There are a number of small problems with this volume of American Vampire that I want to touch upon, but I think the greatest issue is a lack of focus. The previous volume had two major goals -- introduce Pearl and introduce Skinner -- and it did both of those fairly well. Those characters should be our way through these stories, and when they're on the page they certainly grab our attention. The problem is that the book has so many other ideas it wants to pursue, so many story threads that it wants to setup, that it never feels like the book truly settles down for anything. It's a whole lot of ideas but no real follow through just yet.

Take the Vegas setting, for example. We're told that because the investors needed additional money to make the Dam they needed to look for a less reputable source. They ended up turning to the bank of the vampires (you could call it "very old money"), but because of that it put a target on their backs. This would seem to imply that the European vampires (which, as we learn once again, are the dominant form on Earth) have some desire for the Dam. Is it just money or is it something more? That part is never explained. Nor is Skinner's involvement with the plot ever really focused. He's here because he hates European vampires and... reasons? He feels very superfluous to the story which is weird to say for a character that was basically on every page of the first volume of this series.

Meanwhile we have the Vassals of the Morning Star, vampire hunters that show up here after there was no reference to them in the first volume. That doesn't bother me on its own, but I do have issue with the fact that their whole organization here (assuming there is a larger organization, which considering their formal name one would assume there is one) remains pretty nascent and unexplored. It feels like the book needed to dedicate more time (at least a couple of more issues) to all the plot threads of "The Devil in the Sand" so that all its big ideas could be better fleshed out. There's good work that could be done here but the story doesn't carry it quite far enough.

Over in Pearl's side of the volume, it does feel like the book doesn't quite know what to do here. The story isn't really told from Pearl's perspective but from Hattie (who is interesting and I want to see more of her) and Henry (who comes across as pretty flat). There's a kernel of an interesting story here, the confrontation between Hattie and Pearl with Henry caught in the middle, but that isn't the story we actually get. Instead Henry ends up going on a similar journey to what Pearl went through in the first volume, just in miniature (and without being turned into a vampire in the process). The story we want to get isn't what we're actually told, and the tale we do get is a rehash of stuff we'd already seen. That's not really a great way to tell a story. 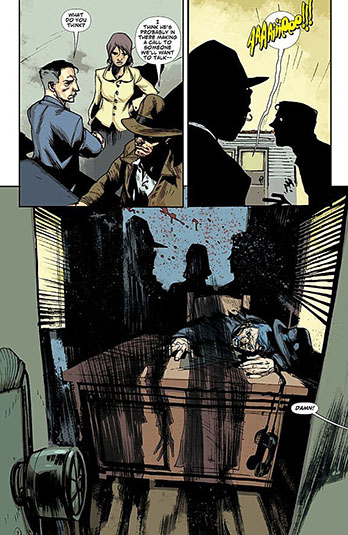 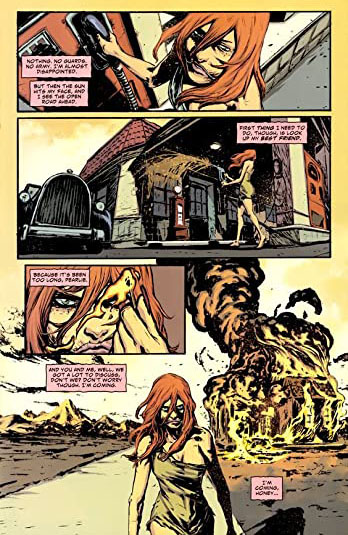 Again, there are threads here that I find interesting. Hattie could make for a solid villain in the coming books, and we hopefully will get to see some of that soon. I do remember that Pearl is only in this holding pattern for a while and then she starts to join whatever fight is coming, so we shall soon see her engage in all the vampiric machinations. Considering she was a main character of the first volume, though, it's weird to see her so passive here. Hattie is more of a protagonist than Pearl, despite being the actual villain, and it's a dynamic that feels off somehow.

In general this book doesn't feel quite as strong as the previous title. What does work about it are the things that generally worked the previous time around: the sense of a larger world, the character dialogue, and the artwork. That's all still strong here, a benefit of having Snyder and Albuquerque as the leads on every volume of this series, but this book struggles to find its focus otherwise. This isn't a terrible volume, per se, but there is a weakness here, a "sophomore struggle", that shows the growing pains of the series. It's in a place where I do hope that the comic is able to improve (which, considering I read through nine volumes of the series the last time I read the comic, I'm sure it will improve). There's good material here, now we just have to hope that with this world building out of the way the series can regain its focus.