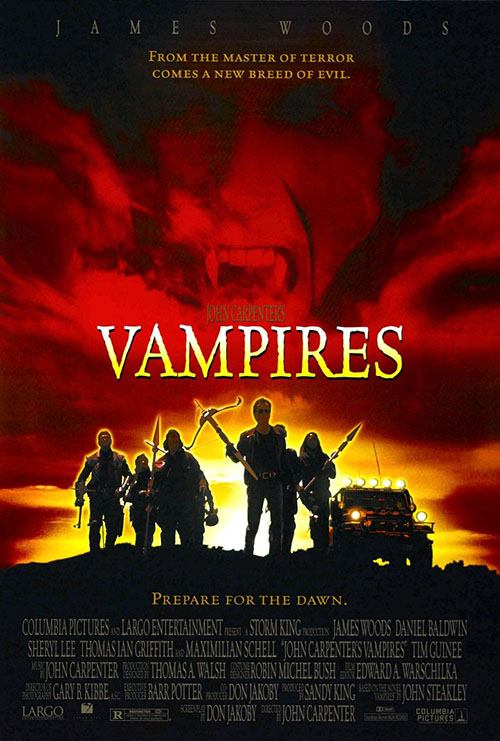 I am a fan of John Carpenter's early works. Back in the early 1980s he was an undisputed master of horror (even worthy of getting his own episode in the Showtime series Masters of Horror), turning out works that are considered classics of the genre like Halloween and The Thing, horror films I'll go back to again and again. When the man is firing on all cylinders, he can create a film full of scares, tension, and drama such that it'll stand far above any of the pretenders that try to ape the style.

Late era John Carpenter, though, has cranked out some real turds. Escape from L.A. is an obvious go-to point for some to point at, marking the film where the director lost his way (although Memoirs of an Invisible Man also seems like a film most will hate as well). From this point forward, Carpenter seemed to lose what made his films so good. He went from someone defining a genre to hack work copying the style or substance of others. 1998's Vampires is another film that easily makes that case.

Released two years after From Dusk Till Dawn, Vampires feels like John Carpenter seeing that movie and saying, "if that's what people think is horror, I can make that." It certainly seems to fit in his style, taking notes of horror and blending it with the bad-ass, take no prisoners anti-heroes of films like Escape from New York and The Thing. Vampire films in this genre ("Tarantino but with supernatural monster" genre) van work; we covered The Forsaken (which came out three years after this movie), and shows there was worthy tales to tell in this style. Vampires is not one of those films.

I'm not sure how John Carpenter go so far off the rails with this film. Maybe his heart wasn't in it, or perhaps he thought the film he was making at the time would just appeal to the masses that enjoyed From Dusk Till Dawn, taking a paycheck gig so he could then go and make something else. I'd hate to think that Carpenter saw the screenplay for this film and actually thought he was turning out a solid, artistic vision. Whatever the case, though, Vampires is a film that just doesn't work on any level. 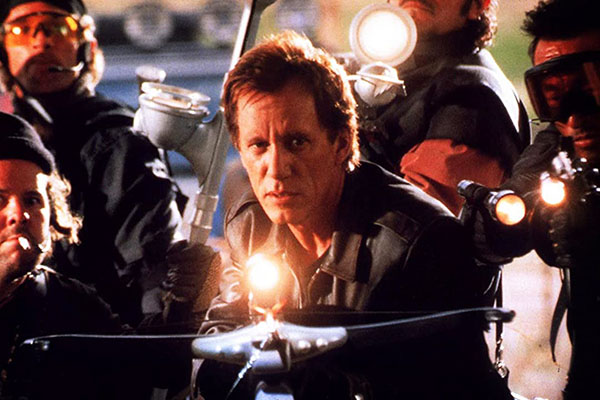 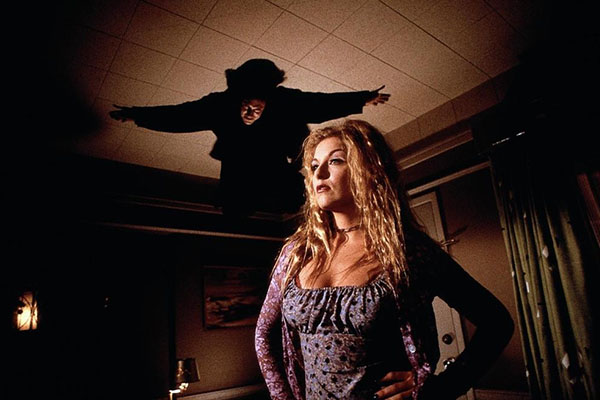 The film focuses on Jack Crow (James Woods), the leader of a Vatican-sponsored team of vampire hunters to scoured the American Southwest for and undead to kill. We watch their first hunt of the film as they went into an abandoned building and hunted down every last dead-head in the joint, cracking wise as they eliminated the dead. But, after killing all the suckers in the place and heading back to their hotels to celebrate their grand victory, the hunters were all in for a terrible surprise: the master vampire the team didn't get, Jan Valek (Thomas Ian Griffith), stalked them down and killed almost everyone there.

Jack was left with just one member of his team remaining, the tech expert/driver Tony Montoya (Daniel Baldwin), along with a hooker bitten by the master, Katrina (Sheryl Lee). The guys decided to use the woman, both as bait for the master as well as a way to potentially see through his eyes and find out where the master went. But as they dug further into the incident at the hotel, and were stonewalled by their Vatican contacts, they eventually realize that Valek wanted more than to just kill all the hunters; he was after a relic that could fully complete his transformation into a vampire, turning him into a day-walking fiend from Hell, something the two hunters had to stop, whatever the cost.

I want to be clear: this film fails for a number of reasons but the first is that it's just not creatively interesting. The story of Valek is something I've seen plenty of times before: a priest turned bad guy, turned into a vampire by a Church ceremony who then looks for the means to stalk the daylight. Admittedly some of those films (like Dracula 2000) came out after this film, but there are plenty more than came before; the blending of the holy, the Church, and the unholy, vampires, is a heady concept that has fueled films for decades. Regardless of whatever other sources you've watched, none of them let Vampires feel interesting or fresh at all.

Beyond that, though, is the fact that this team of "expert vampire hunters" are all a bunch of idiots. When we see them hunt (before they're all slaughtered) they all are terrible at their jobs. They don't know how to handle weapons, they get in each others' way, they fumble through their kills, and they generally make a big mess of everything. When they all get killed it's not shocking (although it is filled with a lot of gore) since they've already proven themselves to be inept. You're just glad they're out of the way. If only Crow and Montoya could have been killed with the rest of the crew. 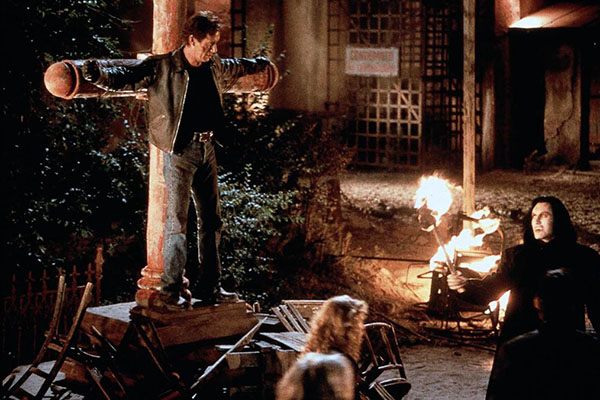 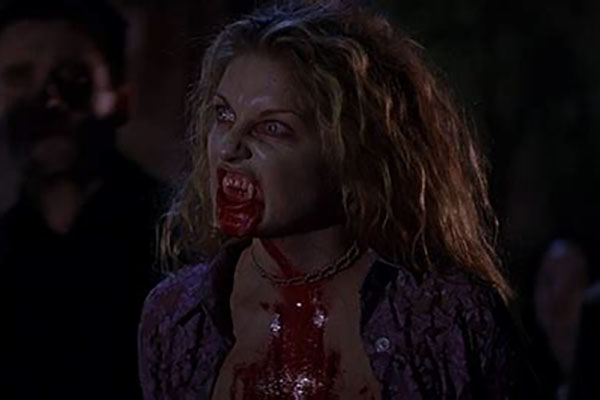 Certainly the worst offenders in this movie are Crow and Montoya as they're too awful, misogynistic, terrible people. They aren't the heroes here, even though the film makes them out to be, as they're just total and complete assholes. They're abusive to the girl they effectively kidnap (whether she's becoming a vampire or not), slapping her around and degrading her every chance they get. That's on top of the fact that Woods and Baldwin are now known to be two of the bigger shit-heels in Hollywood, coloring their already awful characters even more. It was hard for me to care about anything in this film because I hated every second I had to spend with the main characters.

The film is just inept, and awful, on so many levels. The action is poorly directed, the music is annoying (and these are two of Carpenter's strong suits, normally), and the characters are obnoxious. It's hard to get invested in anything because I didn't care about the story, I hated the leads, and I wished the movie would just end (a feeling I felt 15 minutes into the movie). I knew going in this movie wasn't great (I've watched it a couple of times before for this site, in fact), but I wasn't prepared for how awful it could be. It has no aged well in the slightest.

Thankfully audiences at the time apparently had the same opinion of the film I have now as the movie barely made back its modest $20 Mil budget. While it did spawn two sequels, those films were barely related to the first film in anyway. And that's great because if I had to spend any more time with Woods, Baldwin, or this awful film I'd likely just turn my TV off instead. This film is bad, but in the kind of way where you sit there going, "how could a film with this kind of budget, and people obviously trying to make a real movie, be this bad." It's a case study in how to completely bungle the crime film-plus-monsters combo, proving not everyone should to to make a film like the Rodriguez/Tarantino schlock-fest, From Dusk Till Dawn.