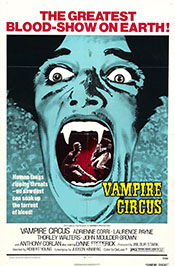 We open in Stetl, a small town in the Austrian countryside. There, the evil Count Mitterhaus has been luring women and children to his castle (aided by his human servant, and one time wife of the local professor, Anna Muller) where he then feeds on their blood, killing them. Fed up with his actions, a small band of villagers finally come together to kill the vampire and destroy his castle. However, with his dying breath the Count lays a curse on the town, stating that those who had a hand in killing him, and all their children, will suffer and die. While the townsfolk set about blowing up the castle, Anna drags the vampire's body into the crypts below the castle before fleeing.

Fifteen years later, Stetl is dying from a plague. Cut off from the rest of the world, they are forced to fend for themselves. Thankfully (maybe), a circus comes to town (somehow sneaking past the armed guards that closed the roads to the village) to entertain the folk and ease their minds in this time of need. Or have they, as curious happening begin almost as soon as the circus arrives. Soon, bodies begin turning up and people start dying (of something other than the plague). Is the circus to blame, or has the evil count come back from the dead finally have his revenge?

In theory a movie like Vampire Circus should benefit from its independence to the rest of the Hammer back catalog. Since it doesn't feature Dracula, Carmilla, or some other previously killed vampire lord, the movie can find a new path, and way to avoid the "oh he died, but we're bringing him back in some convoluted way" that most Hammer films feature. Except, Circus fails to step away from the past. Despite featuring a different vampire lord from the outset, the movie immediately kills him off and sets us back on the path of "revive, kill, repeat" that Hammer has tread so many times before.

Not that the big plan to bring the Count back makes all that much sense. It's not much of a spoiler (since it's in the title) to mention that the circus is populated by vampires (because it's called Vampire Circus -- the performers weren't vampires, we'd all feel cheated). So these vampires wait 15 years to bring the count back, and then they have to kill each of the children of the leaders of the town and spill blood over the vampire's corpse to raise him. Except... not to give spoilers, nothing goes exactly to plan, and everything is eventually made moot in the last reel. Those who have been watching the movie, waiting for everything to come together, are left wondering "what were the vampires so worked up about? They could have easily solved everything five minutes after the count died." 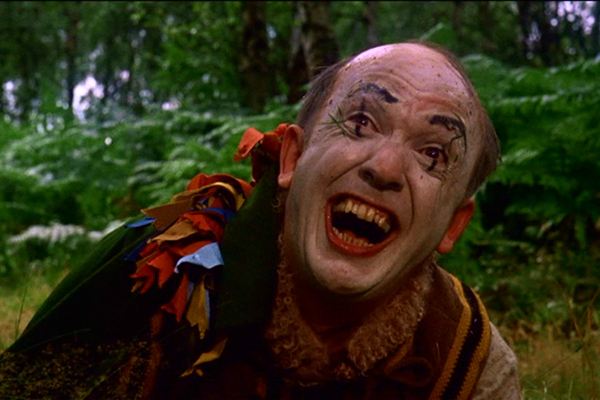 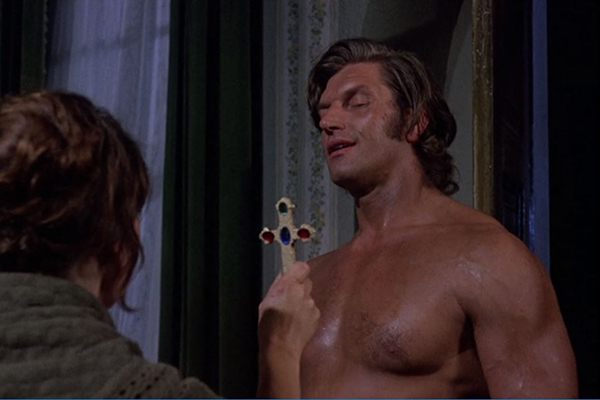 Beyond that, though, what little story there is (which is already overly elaborate) barely fills 45 minutes of movie. The rest of the time is spent with characters watching the circus performers (which aren't that entertaining), discussing what they watched, going back to discussing the plague on the town, and then going back to the circus again. It's like in movies where they get a featured singer or band, and they have to stitch a performance by the musical act into a club scene to fulfill the contract, except with a circus (and just as boring). Plainly the creators of the movie thought having a circus of vampires would be different (which, to be fair, it was) and interesting (it wasn't), but they doubled-down on the amount of time featuring the circus to try and make it more interesting than it was... which worked about as well as you'd expect.

And, to note, they spend a good three minutes on a dance sequence in the middle of the circus, introducing two characters who would seem to have some kind of significance... and yet at least one of the performers in the routine never shows up again (I think that may actually apply to both, but some of the actors look so alike it was impossible to tell who was who at time). They go out of their way to intro this weird cat-lady, and then she vanishes, is never mentioned again, never performs again, and she has absolutely no connection to any murders or the Count's revenge plot. Her scene is just padding. Well, padding and nudity, since she performs in just body paint.

Which, while we're on the topic, I want to point out that there is a lot of nudity in this movie -- it's not shy about showing the naked female form. That's not to sound prudish, mind you, but the US gives this film a PG rating, so there was vastly more naked flesh in this movie than I was expecting.

At least the nudity helped to distract not only from the poor pacing and threadbare story but also from the terrible acting. The townsfolk, by and large, are tolerable, but the vampires in the movie are all pretty wretched actors. The Count is hammy when he isn't desperately trying to find a way to be scary with fangs that are way too big for his mouth. Another vampire, Anton (John Moulder-Brown) was probably going to cool and smoldering, but he ends up looking uncomfortable, creepy, or (when he opens his mouth and tries to look threatening) dumb. What he doesn't look is cool, smoldering, or scary. These are, in effect, some of the least scary vampires in a Hammer film. 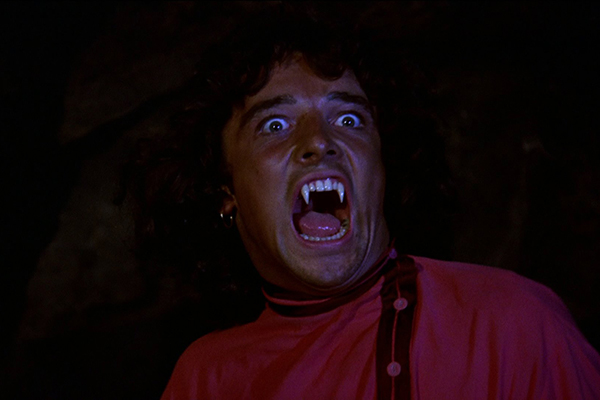 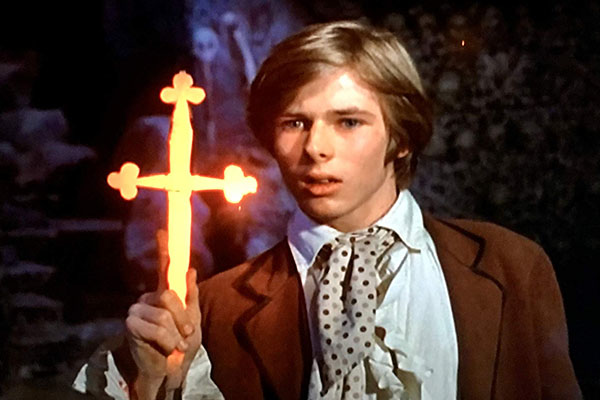 In short, this is not a movie worth watching. It's boring, dumb, and makes little sense (story-wise). Fans of Hammer may want to watch it once, just so they can say they saw all the studio's vampire movies. Everyone else should avoid it.

While not officially part of any Hammer vampire series or related to any of the other titles in the catalog, Vampire Circus does share sets with the previously filmed Twins of Evil. Also, despite being independent of the Carmilla series, the vampires in Circus has similar powers and abilities to Countess Karnstein -- specifically: they feed on human blood (unlike the vampires in the later Captain Kronos), they can go out in sunlight, and at least one of them can turn into a panther (similar to Carmilla).