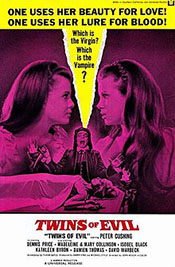 Sometime after the death of Carmilla (aka Mircalla, aka Marcilla) Karnstein, a new branch of the clan has taken up residence in the family castle (which, it's alluded to, is the same castle featured in the previous movies even though it looks nothing like it did before, and conspicuously now sits atop mountain). The rakish Count romps through his land, sexing the women and taunting the ultra-religious townsfolk with his craven ways. And yet, it's hard to hate the man when there are seemingly worse folk in the countryside -- namely the Brotherhood, and band of priests who go around "purging" the evil from the land by kidnapping young women and burning them at the stake for being witches.

However (in clearly a move to make us think no one in this movie is a good guy) soon the Count give in to his family's evil ways. In a fit of boredom he elects to sacrifice a young virgin to the devil in hopes of gaining great power (because, you know, sometimes you have nothing better to do on a Saturday night). The ceremony brings forth the spirit of his long-dead ancestor, Mircalla (aka Carmilla)... and then they make out and she turns him into a vampire (family is like that). Meanwhile, family of the head priest comes into town, two virginal young twins, Frieda and Maria. One is pure of heart while the other is a lover of sin. Will the girls be able to fight of the advances of the newly embraced Count Karnstein take one, or will he turn both of them into Twins of Evil?

After the rather rote rehash of a story that was the second film (Lust for a Vampire, the third film in the Hammer Carmilla cycle is a refreshing and daring. While still ostensibly a lesbian vampire skin flick (as much as 1970s England could produce, anyway), Twins of Evil makes some bold narrative choices that help to push the series further.

The most interesting part of the movie is certainly the fact that so many characters defy the "good" and "evil" labels normally ascribed to heroes and villains in Hammer vampire movies. The priest, as mentioned, burns young woman at the stake and we're never once given any cause to think that any of these women actually are witches or that they deserve it -- characters rail about the fact that what the priest is doing is wrong, but he has the backing of the Church, so he keeps on doing what he does. Even still, he clearly believes that what he is doing is for the good of the townsfolk 9and their immortal souls). The right idea with entirely the wrong methods, then. 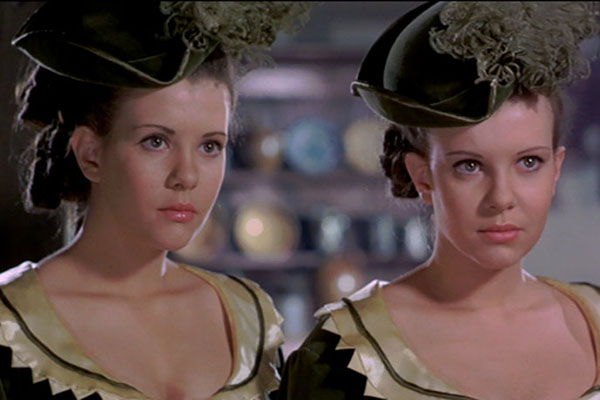 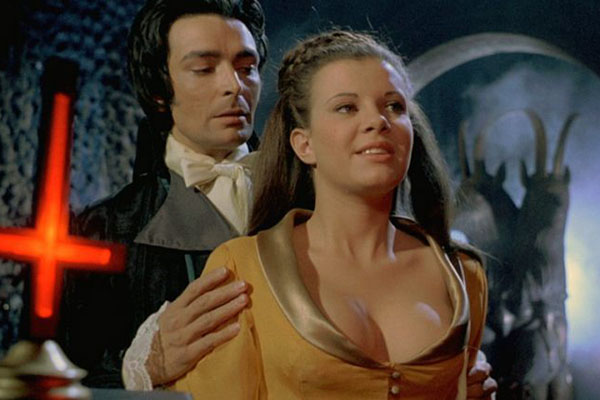 Meanwhile the Count does eventually become and evil vampire, but before that he espouses vehement opposition to the burning of young women, clearly drawing a line in the sand against the "evil" priests before becoming just as evil (in a different way) himself. Is he still a little good, or just evil through and through, then? If both the lead characters are evil, who do we root for?

Well, the obvious choice would be the titular twins, except even then we're encouraged not to entirely trust them. The movie is titled "Twins of Evil" so obviously we're supposed to expect them to be bad. One of them, Frieda, is even described as "fiery, a complicated woman with many secrets". Maria, then, is the "good girl" who we watch to see if she falls in to sin with her sister or if she's able to save them both. In effect every character lives in a morally grey area, giving this movie a challenging, yet satisfying, hook to it.

It's worth noting that from a production standpoint Twins of Evil is a vast improvement over its predecessor. The laughably bad cinematography is replaced by a much steadier set of hands this time around, so there's no terrible, bumpy angles or obviously bungled shots. If anything the camera work and effects are the best of the series. Of note are a couple of "mirror" shots where both of the twin actresses are used -- fake rooms are built behind a "mirror", allowing for the use of a very practical effect when vampires walk in front of the mirrors and aren't seen. No camera trickery or composed shots there, just one twin on each side and mirrored movement. It's not always seamless, but it's still a pretty nifty little effect thrown in by an assured directorial team.

I would also credit much of what works in the movie to the skilled director and editor. The story is fleet and fast, not lingering on dull establishing shots or movie stretching scenes of characters walking back and forth, back and forth. I'd say there was probably much more footage (and story) for the film than what ended up in the final movie, as the film quickly cuts back and forth between storylines with characters acting as if days have passed. It's never jarring but it does speak to lots of footage left on the cutting room floor. 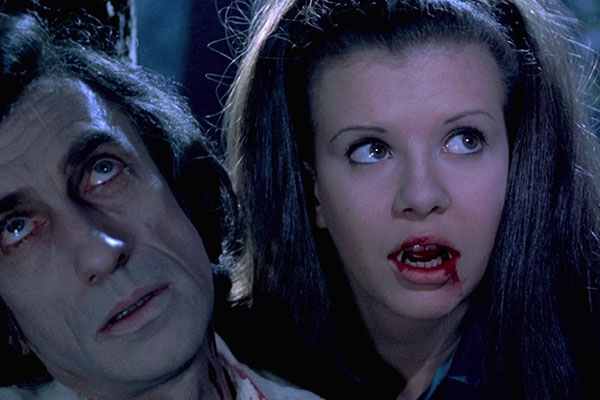 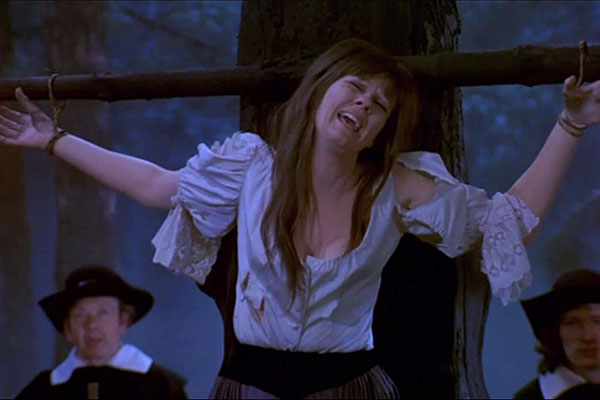 If there's any choice in the production that stands out as a bad choice it was in the voices for the lead actresses. Hammer made the decision to overdub the actresses in post-production (for whatever reason -- I haven't watched interview with the original actresses to know what they sounded like or how strong their accents were). This leads to a number of noticeable situations where their "voice" doesn't match their lips. Eventually you stop noticing it, but it's a curious choice that makes the movie seem slightly less polished.

Still, once odd choice does not ruin a movie. Twins of Evil is a return to form for the series. Vastly better than what came before it, it's a fine vampire movie and one that's easy to recommend to anyone that's a fan of the genre. Even better, because of it's fleet story and editing it's easy to see modern audiences enjoying this flick. A good movie for fans new and old.

Although the Hammer Carmilla cycle ended with Twins of Evil further titles in the series were originally planned. Titled either Vampire Virgins or Vampire Hunters, production on the fourth film was eventually halted as the film studio was losing money. However, some elements (such as a character with the Karnstein name) made their way into a kind of spiritual sequel, Captain Kronos - Vampire Hunter.

Meanwhile, although it does not feature any Karnsteins in it, the Hammer flick Vampire Circus does feature sets from Twins of Evil as well as vampires with similar powers and abilities as in the Carmilla series.