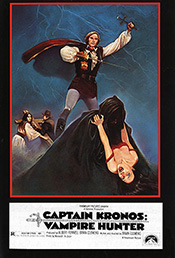 Out in the northern European countryside (which, in the tradition of Hammer films isn't explicitly named, but one can assume it's in 1800s Germany some related part of the Holy Roman Empire), young girls are falling prey to vampire attacks. At least, from the title of the movie, Captain Kronos - Vampire Hunter, we have to assume it's vampires. The girls are dying with blood on their lips and a lost of their youth and vitality (turning into haggard old crones before death takes them). It may not seem like the traditional vampires we're used to, but it does smack of vampirism all the same.

Enter our hero, Captain Kronos, a war veteran who has dedicated his life (since retiring from the army) to ferreting out and killing vampires. Called to the region by his army buddy, Dr. Marcus, and aided by the hunchbacked yet oddly charismatic Professor Hieronymus Grost and the young peasant girl Carla, Kronos must find the vampire (or vampires) lurking nearby and destroy them before they can take any more lives.

For a Hammer vampire flick, Kronos is a bit of an oddity. While most of Hammer's monster films focus on peasants attacked and tortured by the evil living nearby, with a clearly designated villain and obvious lines of good and evil (barring the occasional Twins of Evil), Kronos is an adventure movie about a well trained hero. We don't even know who the villain is until the last act (although savvy cinema hounds will probably have an inkling of where the flick is going early on). The film is more of an adventure thriller than a horror flick.

That's not to say Kronos is a bad movie -- not even close. This is one of the more watchable Hammer horror flicks. What works, really, is how different the film is from the vampire movies that came before. There's an air of mystery to the story since you're never quite sure what's going on with the vampires. Giving the vampires a different set of powers certainly helps, since these ones feed differently and can't simply be staked or burned. It leaves the viewers questioning what kind of vampire this is, or even if it's a vampire at all (after the witch-hunting storyline in Twins of Evil, it's not hard to imagine some viewers wondering if it really was vampires at all). Then, with the heroes setting up traps and feeling out what kind of foe their fighting, the movie becomes about the chase, not the scares.

There is an element of supernatural horror, though, in the film. While the movie is relatively bloodless (even by the milder standards Hammer usually set due to the old ratings boards), but girls do get drained of life force. The "aging" making may not be the best (certainly for modern audiences it won't look that convincing), but the thought of having your life drained away in such a fashion is certainly quite creepy. And the vampires keep getting away with their kills, taking a fairly large number of lives, lending the movie quite an edge -- will the heroes save anyone, or are the vampires going to keep getting away? 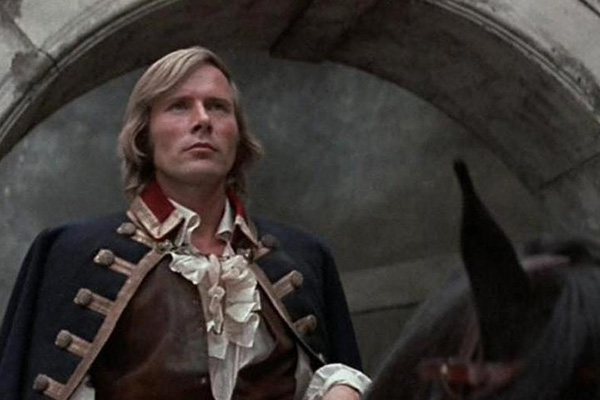 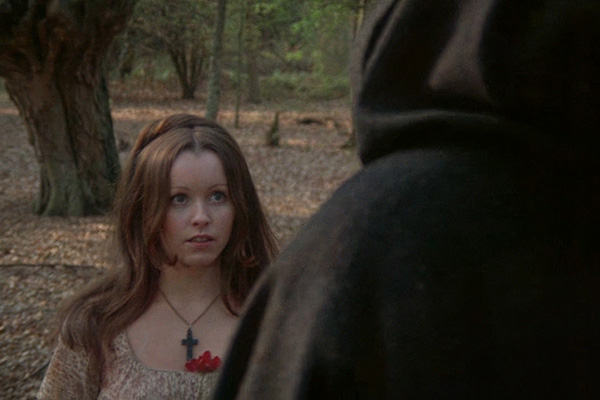 While the plotting and direction of the movie works fairly well, what doesn't quite work is the star at the center of it all, Horst Johnson as Kronos. When he's sitting around, playing suave and collected he embodies the Captain very well, However, the star was clearly not well trained in the swashbuckling arts (like sword fighting), and his acting scene vary from bad to laughable. The editor does what they could with the footage, quickly cutting around to hide how bad the action is, but it's certainly a big hole in the film. Thankfully, other actors do better with the parts they're given. This is especially true of John Cater as Professor Hieronymus Grost. As I noted above, Cater takes his character, the hunchbacked prof, and makes him into a smart, warm, charismatic center for the film. Kronos may have the title, but the Professor is the real star of the show.

And in the end, that's what works about the movie. It is, in a weird way, kind of a hang-out movie with three interesting companions as they perform quirky tricks to find vampires and then come up with interesting solutions to taking them out. It doesn't always work, but when it works it really works. Captain Kronos is a great flick with an interesting bent to it not normally explored in the vampire genre.

Captain Kronos was set to begin a new cycle of horror movies for Hammer Films, but unfortunately it came out around the same time the studio experiences poor finances, and instead was one of the last films made by the studio.

There is a tenuous connection to the Carmilla cycle of Hammer films, though. One of the villains of the movie is a Karnstein by blood (at least by all Online sources -- the actress in the movie pronounces it "Karsteen", so she either said it wrong, or the connection isn't actually there). Still, many fans consider this the unofficial "Fourth Karnstein Film".