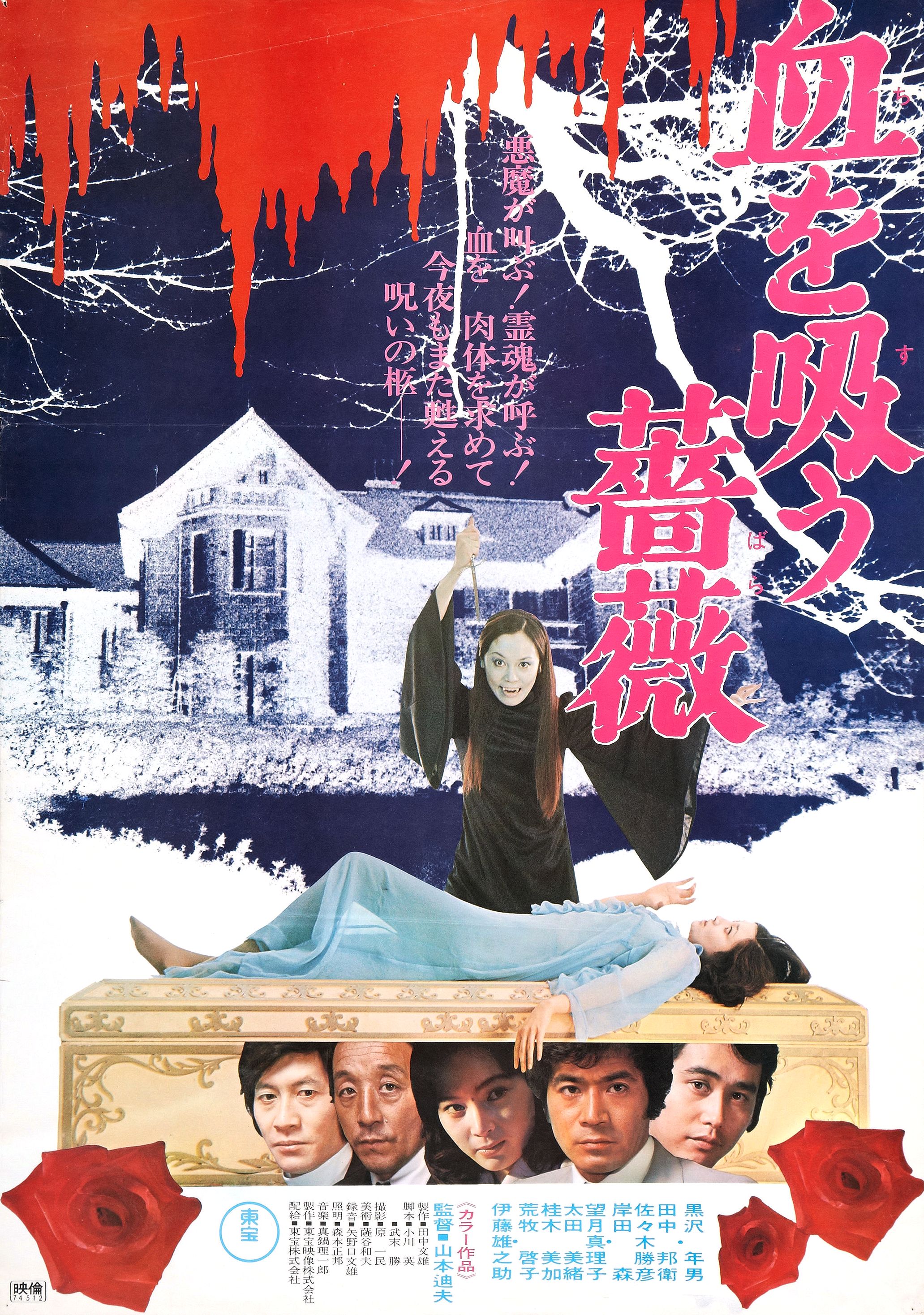 After the development and release of the first two films in what would come to be known as the "Bloodthirsty Trilogy", Toho ended up delaying development of a third film for the set. Although the production company was willing to fund a third film, the team behind the movies, director Michio Yamamoto and producer Fumio Tankaka, moved on to other projects, feeling burned out on the horror genre (this burnout may be part of the reason why the second of the three films, Lake of Dracula, felt so much less impressive than the first, The Vampire Doll). After time away from the series, though, the two reunited for one more stab at the genre: 1974's Evil of Dracula (Japanese title Chi o Su Bara, translated as "Bloodsucking Rose", which was released in the U.S. in 1975).

In comparison to Lake of Dracula, this third film (and the second in the "Dracula" line, although it bears almost no connection to the previous effort) is a refreshing step up in terms of storytelling and style. The time away for the production team, then, helped to rejuvenate the duo. At the very least they made a film that doesn't feel like such a retread of what Universal and Hammer had been making over the previous four decades. All things considered, I'll take what I can get when it comes to monster movies.

The film opens with Professor Shiraki (Toshio Kurosawa), arriving at the all-girl's Seimei School in Nagano, Japan. There he's first greeted by the strange assistant to the Principal, Professor Yoshii (Katsuhiko Sasaki), before eventually being greeted by the Principal himself (Shin Kishida). From there, the teacher tours the grounds, meets the school physician, Dr. Shimomura (Kunie Tanaka), and a handful of students including Kumi Saijo (Mariko Mochizuki), Yukiko Mitamura (Mio Ota), and Kyoko Hayashi (Keiko Aramaki).

It's during these early days that Shiraki learns a few horrible details about the school. For one, the Principal's wife (Mika Katsuragi) had recently died, an event he seems none to shook up over. Secondly, a student recently went missing, Keiko Nonomiya (Yasuko Agawa). The teacher had actually had a dream about both of these women, with young Keiko covered in blood as she wandered through the halls of the school manor. Dr. Shimomura says student go missing every year but no one seems concerned. He and Shiraki, though, come to the conclusion that something much more nefarious is going on, a suspicion that is only solidified when student start going missing and, soon enough, the Principal reveals himself to be the vampire. Can Shiraki find a way to save whatever students he can before he falls into the trap set by the Principal and his wife? 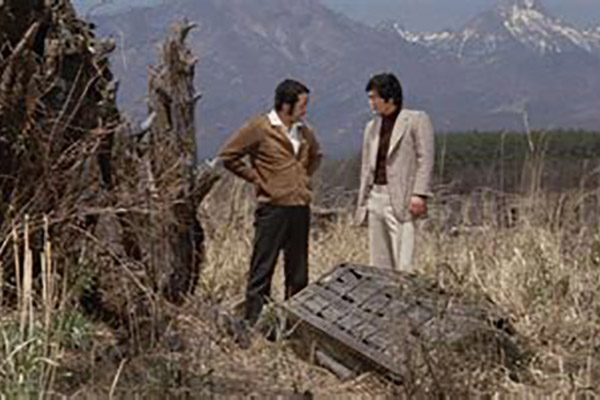 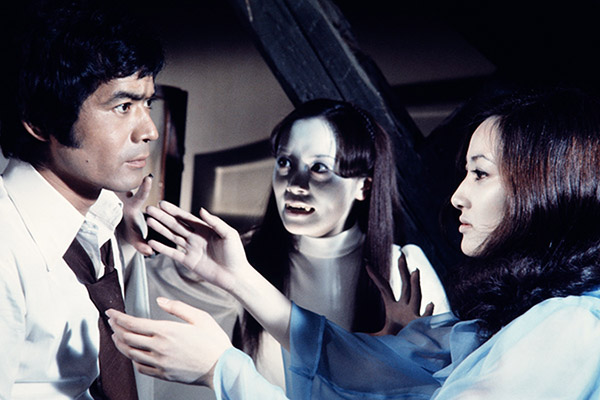 As with The Vampire Doll, the best credit I can give to Evil of Dracula is that the film does what it can to mold a creative take on the vampire lore. There are shade of Carmilla here, with the all-girls school and a vampiress stalking their ranks. This is blended with the classic Dracula tropes -- the vampire, his "brides", and two vampire hunters on his trail -- with all amounts to a pretty decent little story as we try to figure out what the vampires are up to and what their end goal might be.

There are some effective moments sprinkled throughout the film. Scenes of the wife rising up behind the teacher when he's not looking are goofy but certainly let you know early on who the bad guys are and that there's a scheme afoot. The girls get attacked with a decent amount of gore (and a sprinkling of nudity), especially in the last act when gouts of blood help to tantalize the audience. And certainly, we have more than a few effective scenes of the vampire stalking his prey while the girls cower in fear from the monster. That's all great stuff right there.

Where the film falls apart at all is in the last act, when the plot has to make sense of all the various bits. Somehow the vampire invites a teacher to the school every couple of years so they can become the principal. But, in reality, the vampire just takes over their face, or at least tries to anyway. We see this when the wife steals Ms. Mitamura's face and makes it her own. This was actually a concept I liked, except for the fact that then, after stealing the poor girl's face (with a knife), very little is done with the idea. Shiraki immediately sees through the ruse and the wife just laughs and give up the attempt (although she keeps the face for a time). Plus, while it seems like the Principal wants to steal other identities, it's never explained why. In fact, more often than not it seems the vampire just gives up the ruse and kills whoever he's tempted to the school, so I'm really not sure what his end goal might have really been.

The other issue is that, while throughout the film we see the vampire exhibit his hypnotic powers and prove himself to be a strong and powerful being, all of that is thrown aside in the last act. Instead of easily overpowering Shiraki, the vampire gets into a lame fist fight. There's nary an attempt to hypnotize the professor or bend him to the vampire's will. It's like the vampire simply forgets he has this strength and these powers, which the film obviously did so the two could be on an even level and allow the teacher to eventually have the upper hand. I would have preferred it if the teacher could have somehow outsmarted the vampire instead of having to cheat to let the professor overpower the monster. 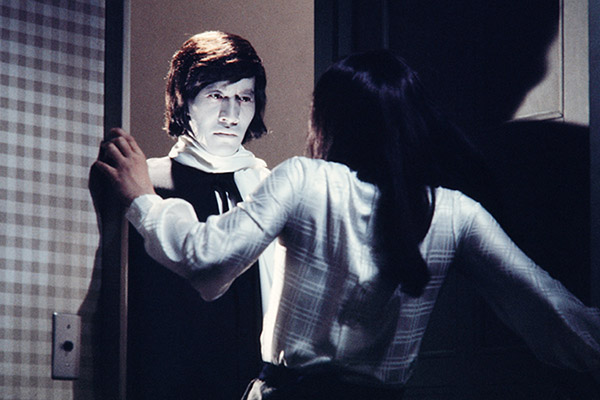 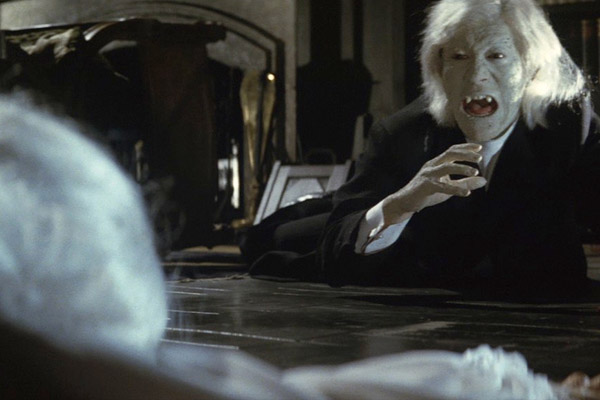 Still, even with these issues there is a lot to like about this film. It has an effective cast that commits to the material, giving excellent performances in this genre fare. Along with that, the movies makes great use of the setting to craft and effective ambiance with a fair bit of creeps and tension. It reminds me a lot of the latter Hammer works in the genre from the 1970s, in fact, although I think this film is actually better than many of the works Hammer put out at the time.

It's not a perfect film, but considering what was produced at the time, this movie actually does a good job conveying a solid vampire tale. Sadly this would be the last of the series from Toho; after this film the production company went back to making their standard monster fare, leaving this trilogy as a curiosity for vampire fans. I personally rather liked the set as a whole and would have liked to see what else the creative minds could have done in the genre.