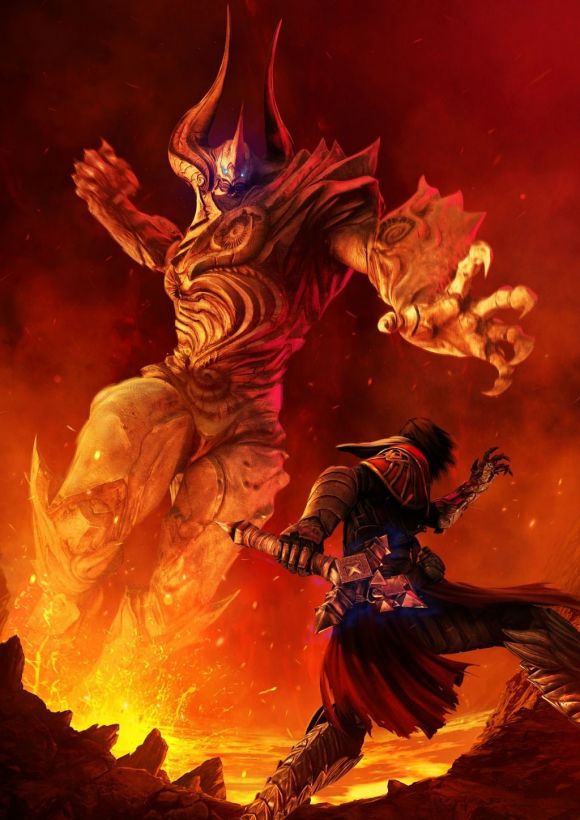 The Forgotten One is a bit of an oddity in the Castlevania universe. As one of the few truly original creations, not based on an specific monster or mythological creature, the true nature of the beast is unknown (as befits his name, with his history lost to time). The games he appear in, Castlevania: Lament of Innocence and Castlevania: Lords of Shadow - Resurrection, provides little detail on his history before the sequence of the game, instead only giving us information relative to the characters and events of the main game itself.

As such we only have supposition, not fact, about what the beast is and where he came from. Fans think he was a fallen angel, like Satan, or perhaps a demon that once served in Hell's legion. Whatever is the case, he stands out as a creature with no history, no past to speak of, and only his actions in each game to inform our knowledge of him. 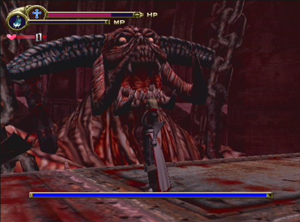 A hidden foe in Bernhard's castle, the Forgotten One is a demon, trapped in a prison, lost to time. Some suspect he was created, maybe from an actual demon or possibly just an experiment performed on humans. Whatever the origins of his creation, his powers grew too strong, too powerful. He broke free of the control over him and attempted to destroy the world.

For this crime, his creators found a way to defeat the beast and bind it, trapping it in it prison. Half dead and rotting, the Forgotten One has been left, suspended in its chains and left mangled from the battle to defeat it, stuck in its prison for years, maybe centuries. But it can't be allowed to break free lest it once again try to destroy the world. 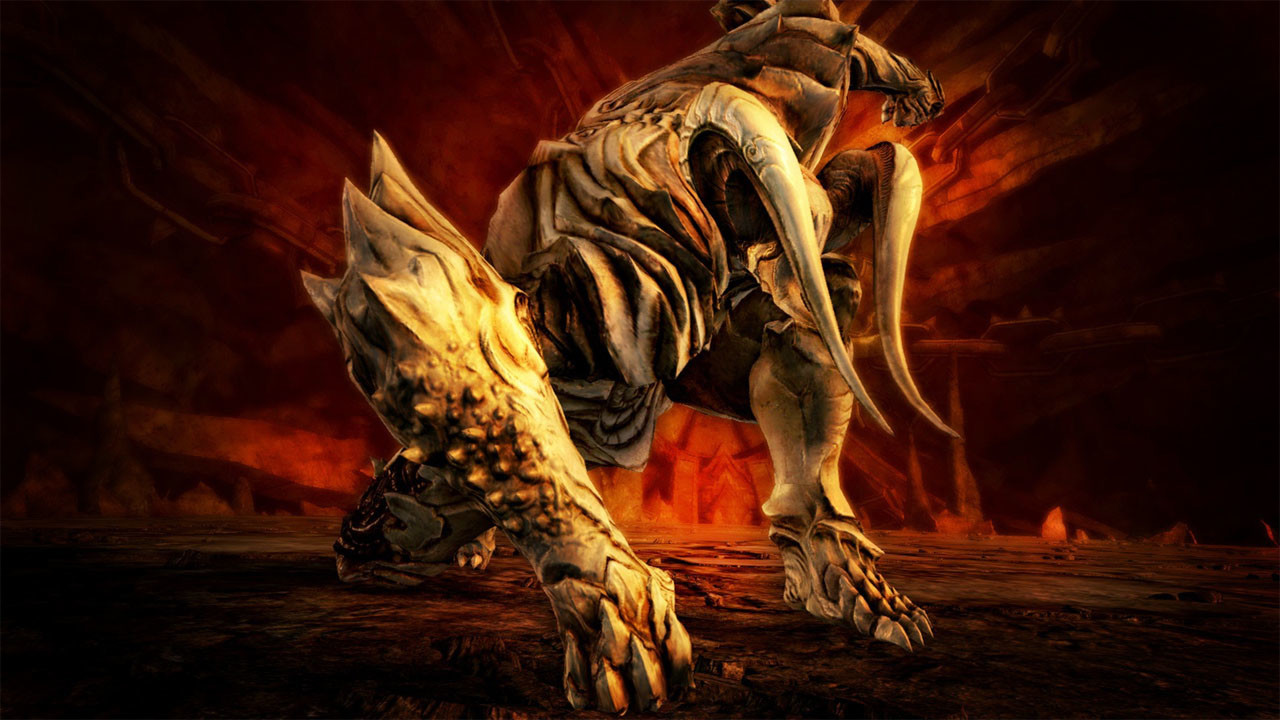 Before the events of the DLC, Resurrection, there were the three members of the Brotherhood of Light: Carmilla, Cornell, and Zobek. When the Forgotten One, the most powerful demonic beast seen on Earth for (at least) centuries was summoned by Walter Bernhard and his clan, these three warriors of light arrived on the scene to stop it. The used the same summoning arena that first brought forth the beast to send the beast back to his Hell dimension, sealing it there with their magic, hopefully for all eternity.

Unfortunately the Brotherhood leaders eventually left this plane for Heaven, leaving their (very powerful) bodies behind. These bodies were taken over by evil spirits which corrupted their power and turn the Brotherhood of Light into a force of evil and darkness. One man eventually rose up to stop them, Gabriel Belmont, and though his motivations may not have been entirely pure (as told in his side of the story), he did eventually defeat all three of these evil Lords of Shadow. Sadly, in doing so, he also broke the seal that was keeping the Forgotten One trapped.

With the help of Laura, the vampiric "daughter" of the evil Carmilla, Gabriel was able to find a way into the Forgotten One's realm; then it was just a matter of defeating the beast. After pursuing the demon across its realm, Gabriel waiting for a moment when its power was otherwise devoted to breaking the inner seals of the dimension. This is when Gabriel struck, battling the demon and damaging it twice over. However, before Gabriel could fully destroy the beast its power returned, leaving Gabriel to hide until the demon was once again occupied.

Further through the dimension the demon and hero traveled, with Gabriel continuing to hide from the beast's gaze until the time was right. Only then did he attack again, when the demon was at it's weakest, leading to a pitched battle for the fate of humanity. This was a battle that Gabriel won, leaving the demon horribly damaged. But then, the final seal broke and the demon's power began to return to him. At the last moment, though, Gabriel threw himself in the way of the power, stealing it for himself and leaving the Forgotten One weak and powerless. Though the beast pleaded for mercy, Gabriel had none to give, destroying the demon and rending it to nothing but ash. With the Forgotten One's power now in Gabriel's control, he became the most powerful vampire in existence. He became Dracul, the Dragon.

Fighting Against the Forgotten One: 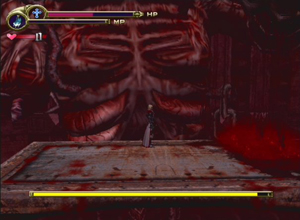 The first time we encounter the Forgotten One, he's trapped in a prison, suspended from the ceiling by chains, and half mangled thing being picked apart by bugs. In this regard he's a lot like the Castlevania: Symphony of the Night foe, Beelzebub. This fight, though, is a multi-stage affair that hero Leon Belmont will have to face.

At first, the beast just hangs there, bleeding poison blood. The maggots that feast on him will drop off and move towards Leon if he gets close to them, inflicting the Curse status effect. Once he damages the beast enough, though, the battle will pick up. For his second phase, he'll start to directly attack Leon with his fists, sweeping his arm along the main platform, smash his fist down onto the platform, or injuring himself to spray blood across the platform. Learning the tells and how to avoid these attacks will give Leon the time he needs to deal enough damage to move on to the next phase.

In his final phase, he'll add two new attacks. First, he'll let out a mighty roar that will shake the room and cause rocks to fall from the ceiling. Leon will have to dodge these rocks, but also use them eventually as cover because the Forgotten One can also shoot out a power beam that will sweep the platform, a single hit from which could instantly kill Leon. Leon will have to hide from the beam behind the rocks or risk death. Should you handle this battle properly, the slog of a fight will eventually end in its defeat and your success. 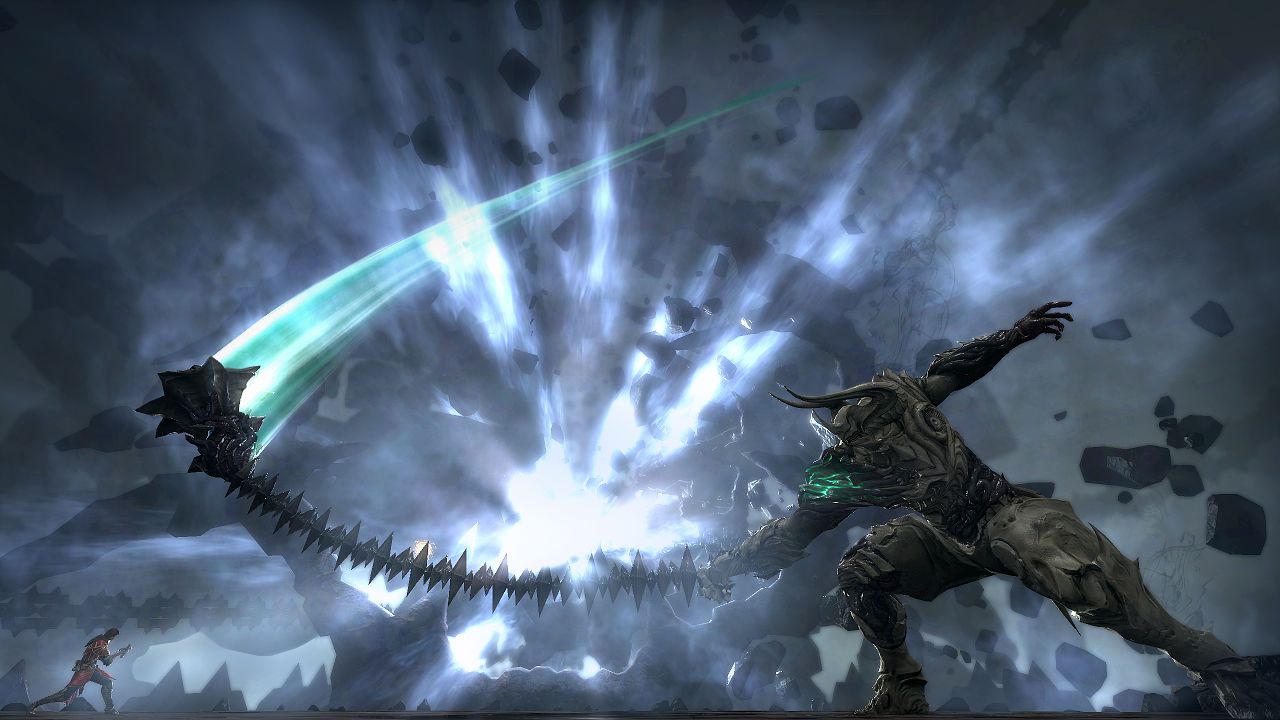 That then brings us to Lords of Shadow, which reimagines the Forgotten One as a major antagonist. You'll see the Forgotten One long before you actually have to fight him. As the hulking demon slowly climbs his way out of the multiple levels of his hell, Gabriel will have to pursue the beats without being seen. This involves a lot of platforming (never Lords of Shadow's specialty) mixed with a bit of stealth game play (which is just as thrilling as it sounds).

Eventually, though, you will get a chance to take on the beast, one-on-one. The initial part of the fight is a basic melee slog. The Forgotten One has a weak point on its right leg (which will glow green), so you need to go in and wail away on it with all you've got. While you're doing that the beast will lash out with a whip-like weapon, striking the ground before swinging it off to the side (so dodge the first strike then jump the second). It can also swing a short-range sword, stomp the ground (causing a radial blast), or leap up and then slam the ground (causing a bigger radial blast).

Once you weaken the beast enough it'll leap up in the air and shoot an orb of energy at you. You'll need to perfect block this orb (something we at the Inverted Dungeon are terrible at) to send the orb back at the beast. Fail this and the Forgotten One will start to heal his energy and you'll have to do this whole process over again. Return it properly, though, and the beast will be stunned and you can go in, of course, for a cinematic Quick Time Event sequence, opening up the second weak point on the boss.

Now his weak point will be the left side of his waist. The basic process of this fight is the same, dodging his same attacks while going in to do your own damage. Note, however, that now you'll have to do aerial strikes and your basic ground attacks will not hit his new weak point. And because you're stuck in the air doing attacks, you're much more likely to get hit. This part of the fight, in short, sucks. Once the beast is weakened enough, though, he'll leap back to the center of the stage. This time he'll use his chain whip to pull a boulder down from the ceiling and slam it at Gabriel, causing radial blasts. Dodge this, then leap on the rock for another QTE to finish this portion of the fight and start another cut-scene.

We're no where near, done, though, as there's still half the adventure ahead. The beast will leave the arena at this point, marking the end of the chapter, but we see him again in the next part. Here, once again, you're pursuing the beast through platforming and stealth (which still sucks), before dealing with more QTEs to progress the chapter. And then it's time for the second half of the battle, which opens with a QTE to reveal the beast's next weak point: his left arm.

The basic construction of this fight is the same as before, with similar attacks all around. Some of the tells might be a little different now but once you've been in the fight for a few seconds it'll all make sense. Naturally, because his weak point is his arm, you'll once again have to be in the arm to hit him. And, of course, this leaves you potentially open for attacks. Weaken him enough and he'll bounce back to the center of the arena and do another one of his special moves: he'll summon six rocks from above and then slam them down and push them out towards the edges of the arena. Then he'll hit the rocks with lightning, one at a time, whereupon they'll charge up, then explode. You can get behind these rocks, though, and hit them at the beast, stunning him for another QTE cycle. This will, of course, reveal the next weak point: the beast's right shoulder.

At this point you should know how this goes as the Forgotten One doesn't change up his attacks. The worst part isn't his attacks but the fact that the weak point is so high -- there's a limited window from when you jump up that you can hit him and actually deal damage, so this part will feel like quite a slog. We're still not done with his phases, though, as this, too, will lead to a special attack from the center of the arena: He'll spit out a fireball that will split into three swords in the ground. Pick one of these up and aim them at the beast; throw it true and the demon will be stunned. Do it three times and you can stun the beast fully and open up it's last weak point: it's head, of course.

From here it's just a lather-rinse-repeat of the previous parts of the battle, although we did notice that the demon seems to move quite a bit faster now than he did before so you'll have to work just as quick to get the necessary damage in. Thankfully, once you wear this final phase down, that's it -- no QTEs, no extra things to do. Play ending, roll credits, you're done.