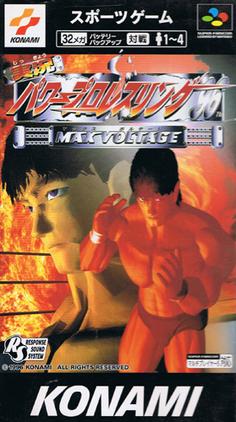 Look, I'm not even going to try and pretend that I'm a wrestling fan. It is not a sport I have ever managed to get into, not in real life nor in video games. I tend not to play sports games in general as the whole genre just doesn't thrill me. Wrestling games, on their own, are slightly more interesting that, say, a football or baseball sim, playing more towards the fighting side of gaming. But there's always some combination of factors that keep me from really enjoying a wrestling game.

Despite this, though, I did have to take a look at Jikkyo Power Pro Wrestling '96: Max Voltage, one of the few wrestling efforts from Konami, because of one simple factor: Richter Belmont (or, at least, a wrestler that looks like him) is in the game. This is (however tenuous that may be) a Castlevania crossover title, and thus we have to look at it on this site. Everything must be reviewed.

At first glance Power Pro Wrestling resembles another Konami wrestling game (and the only other one I could find in their back catalog): The Main Event. That game was a basic two-on-two arcade brawler with simple mechanics. Players could mash buttons to perform moves, and those moves could be context sensitive: face an opponent and you'll kick and punch. Be right up in their face and you'll grapple and perform grappling moves. Be in the air or on the ropes and you'll perform other moves. Power Pro Wrestling uses that as a base and then goes into the stratosphere with it.

Although you can play basic pick-up matches in Power Pro Wrestling -- basic bouts, tag team, three-on-three -- the real meat of the game comes in its career mode. This isn't just a tournament play, or taking the wrestler through a season (although those modes are included in the game as well). Instead you build up a wrestler from the beginning of their career, training and practicing and taking sparring matches, all the way through their professional reign and, eventually, to their retirement. For players that want to spend hours and hours living vicariously through their pixelated wrestlers, this was the mode for them. 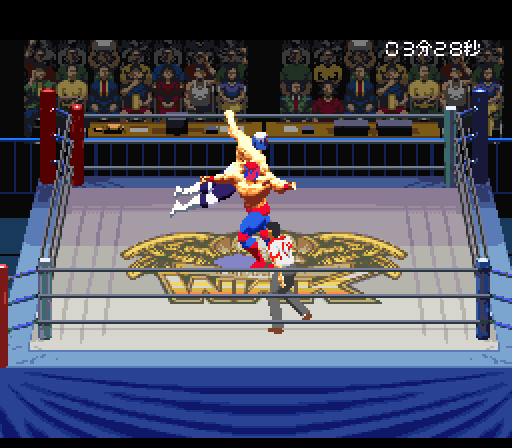 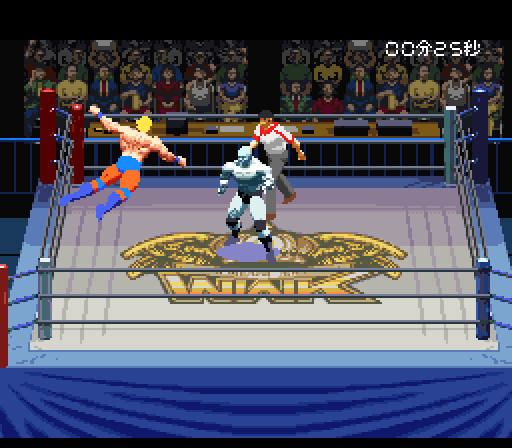 To do this, of course, you have to win matches, and to do that you have to learn how to play the game. I won't deny I'm bad at this title so my time in the various modes was fleeting, but I did manage to glean enough to at least not completely suck. Although there are all kinds of basic moves you can do, the meat of the wrestling comes, as you'd expect, in the wrestling, the grabbing onto a foe and grappling them down, hopefully eventually into submission. Once you latch onto them you can adjust the power of your attack, the move you perform, how you bring them down. There's surprising depth in the basic button combos you perform while grabbing onto them, and a real pro player could probably handle these matches with surprising aplomb. I was not that player.

I will say, though, that even my short stint trying to brute force my way through this game (in a genre I'm not that familiar with) was pretty fun. There's a goofy quality to wrestling that video games accent and enhance, and that plus just mashing away at the controls let me have a bit of a lark playing this game. For me it's not a title I can see myself playing over and over again, but I can understand how a player picking up this game back in the day might have gotten deeply invested in the ins-and-outs of its supremely deep career mode. Konami put a lot of love in their Fire Pro competitor, and it shows.

If you can get deep into the game you will find all kinds of things to unlock as well. As you earn points (i.e., money) you can buy new moves to replace your fighter's basic move-set. These can make you more powerful and, thus, allow you to finish off your foes even faster. This added to the fact that you can pick from a diverse selection of starting move sets (various fighting forms that subtly define the way your character moves) means there's a ton of customization you can explore and get into. Someone really looking to build their own fighter all the way through their career will have a lot to play with in this game.

Or you can just head over to the basic play modes and enjoy some good old basic wrestling. There are a lot of basic modes to explore -- 1-on-1 as well as 2-on-2 and 3-on-3 tag team, submission matches, death matches... even if you don't do a career in the game there's hours of base level content available. I will note that some of these matches can be pretty long -- I started up a 3-on-3 just to get a feel for it and found I was in for a long, 30 minute slog trying to grapple down all my foes. It was a lot, and really was dragging by the end of the match. Chose the mode you play wisely, then. 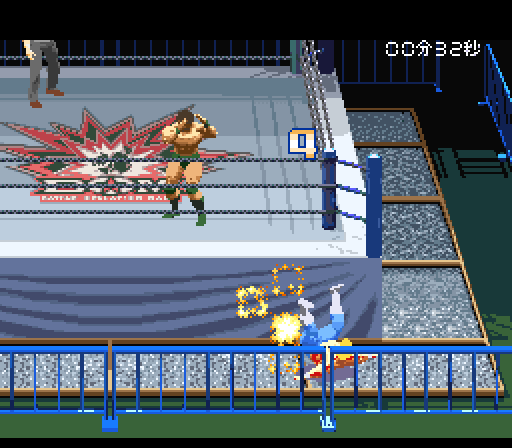 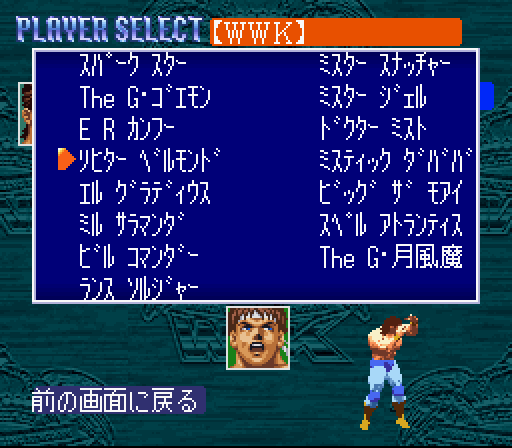 And credit to Konami, they did make a very attractive game. I like the intros to the various matches, with the lights going and the Jumbotron showing the wrestlers intros, all before you get into the match. The fighters themselves are pre-rendered graphics, and they don't have a ton of detail, but they do move fluidly and there's some solid crunching to the fighting animations. The game features very high quality presentation for the era, a stab at making a deeper, and prettier, game than anything in the Fire Pro series at that time. Inside and out, this game was a labor of love.

This wasn't a game that won me over and made me into a wrestling convert. Hell, I'm not sure that's really possible. If you've never really gotten into wrestling games before I don't think Jikkyo Power Pro Wrestling '96: Max Voltage is somehow going to suddenly drag you in. That said, if you have even a passing interest in the genre (and can somehow legally get a copy of this game) this is a title to check out. It's amazingly varied with a lot to do and explore. For the era there were hardly any wrestling games that could match this title for sheer content or style. Konami had a goal, to beat Fire Pro wrestling, and in my opinion they did their level best.

This might not be the most obvious title for a Castlevania fan to pick up. It's hardly related to the series at all, really. But for those that give the game a try, even if for only a few minutes, you'll see the care and consideration Konami put into this title, and that counts for something.