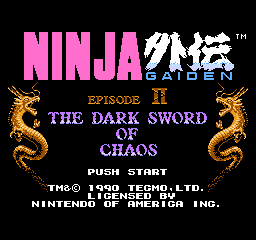 Although it's customary now to see triple-A titles take a while to gain sequels (well, unless they're sports titles or anything from Capcom), back on the NES companies could move faster, producing back-to-back games based on similar engines using small teams to crank the titles out. Games for the NES could be designed before a handful of people (sometimes even just one), as opposed to the hundreds of workers needed now.

That's how, after the success of the first Ninja Gaiden, a sequel could be out a year later. Featuring returning protagonist Ryu Hyabusa, Ninja Gaiden II: The Dark Sword of Chaos (titled Ninja Ryūkenden II: Ankoku no Jashin Ken in Japan, translated as "Legend of the Ninja Dragon Sword II: The Demonic Sword of Darkness") saw the titular ninja get pulled into yet another nonsensical plot over demons, the CIA, a mystical sword, and his kidnapped girlfriend. Although the game featured lush (for the time) cut-scenes, the story really didn't make much sense (aided, in no small part, by terrible writing).

But it's a Ninja Gaiden game, so no one came into the second one expecting Shakespeare. What was desired were anime graphics and brutal difficulty, and the game delivers on both fronts. Like the original titles, the game is punishingly difficult. If you don't have a good memory for every step, every jump, you'll likely find yourself confront by horde after horde of enemies coming out of nowhere, quickly sending your ninja in any of the staggering number of death pits. That is if they even make it that far and don't run out of energy from the swarms of enemies dealing damage. 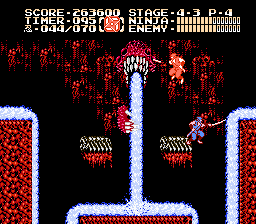 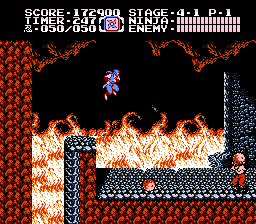 Aiding you in this quest are a number of new powers at your disposal. Now, with the collection of a power-up, Ryu could get a shadow clone that would follow him around, mimicking all his moves and increasing the overall damage Ryu could inflict. This was especially useful on the bosses (assuming you survived to them with your clone in tow), as the clone could stand right in front of the boss, deal damage, and not flinch from any of the damage returned to them (as they were, essentially, invincible clones). These, along with his fire shield, and thrown firewheels and shirukens, gave Ryu plenty of power to take out the bad guys (assuming his ammo lasted).

The game also kicked it up a step with the graphics, featuring a seemingly larger host of enemies over the first game along with varied, animated backgrounds. Coupled with the long, detailed cut-scenes, the game definitely delivered the wow factor. Those that could get into, and get through, the game, were give a high-quality sequel to the original game, a treat for their eyes as the level design punished them at every turn.

Having already covered a number of the ways the Castlevania series and the Ninja Gaiden series seemed to inspire each other in our discussion of the first game, let's instead look specifically at what this game drew specifically from Castlevania. For starters, those lovely backgrounds certainly could have come out of Castlevania III (or, more specifically, how this game influenced Castlevania III since that game came out a few months later), especially the fiery cavern, the underground waterway, and the icy mountain sequences.

Interestingly, some later sections seem more like areas from a Contra, like the cavernous, pulsating sections later in the game. Seems to us like Tecmo was a big fan of most of Konami's output. 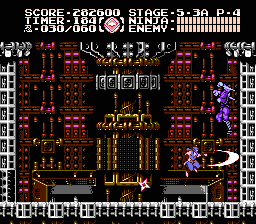 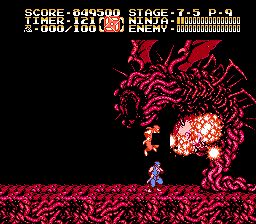 The enemy selection also easily could have come from a Castlevania game. The minions feature a selection of bats, bouncing hunchbacks, spiders, and slimes (on top of the bog standard birds that populated every NES game), all common staples in the Castlevania series. These, combined with the lush backgrounds, make this game feel like a close cousin to the Castlevania games of the era.

of note, an argument could be made that this game has come influence on the later, Castlevania retro-successor, Bloodstained: Curse of the Moon, specifically with the character Alfred. Although Al doesn't move like Ryu, both being much slower and nowhere near as lithe, he does have powers akin to Ryu from Ninja Gaiden II. Specifically, he can summon shadow clones of himself (for a limited time) to aid in battle. He can also surround himself with a fiery shield just like Ryu can.