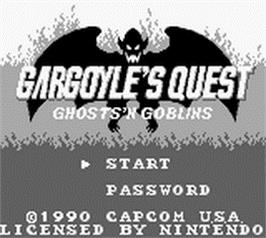 We noted a little while back how Capcom's Ghosts 'n Goblins seemed to play in the same kind of pool as Konami's Castlevania. Both are Gothic-style adventures with a lone hero going up against the hordes of the damned. While they don't play that similarly (if anything, Ghosts 'n Goblins is even more difficult and punishing than the already "Nintendo Hard" Castlevania), it's hard to deny at least some shared DNA between the two series.

As each series marched on, they founds ways to flesh out their own style of play, and generally the series diverged. Arguably, though, there was still an eye kept on what the other company (as well as other games series) were doing, and that's most obvious when you look at the third game in the Ghosts 'n Goblins series, and the first for Nintendo's Game Boy, Gargoyle's Quest: Ghosts 'n Goblins (titled Red Arremer: Makaimura Gaiden in Japan, translated as "Red Armorer: Demon World Village Side Story"), a game that feels like a mix of classic Ghosts game play, Metroidvania exploration, and Square's own Game Boy adventure, the Final Fantasy Legend. It's really just an oddball title.

Taking on the role of Firebrand, one of the Red Armorer gargoyles from the main series, our "hero" has to venture through the Demon Realm and help stop an insurrection that would see a new, and potentially even worse, bad guy seize the throne of the demons: the King of Destruction. Years before, a gargoyle, known as Red Blaze, took on the King of Destruction and stopped his last planned insurrection, and now, as the one willing foot soldier with the power, perhaps, to take on the King, Firebrand has to step up and maybe even take on the role as the new Red Blaze.

To take on the quest, Firebrand will first have to get more powerful. As he explores the world (from a top-down, overhead perspective, like a normal RPG), he'll end up in little random battles. Although these don't reward him with experience, they go grant him pots of power that can be traded in for extra lives, helping to make this adventure a little more bearable. He'll need those lives because the action sections of the game, all done from a side-scrolling perspective, are quite difficult, as you'd expected from a Ghosts 'n Goblins game.

Thankfully, there's another way for Firebrand to become powerful: by exploring the overworld. As he goes along, finding towns and castle, he'll get assigned quests by other demons. These will put him on the path to getting extra health (in the form of additional layers of armor), longer flying time, and (after defeating bosses) upgrades to his fireballs that he can spit. They help to make the gargoyle stronger and more likely to survive his various adventures and the game, of course, is unforgiving in the amount of action it forces our hero to endure.

Typically the game tells you exactly where to go and what you need so long as you talk to the various NPCs and pick up your quests. In construction its like a very light Metroidvania title -- "Oh, you want to traverse here? Well you'll need more flight time where you can get from this item hidden around there." There isn't much backtracking and very little reward for exploring areas you've already been to, making it one of the more linear adventures to still, somehow, slot into the Metroidvania genre.

But then, this very much feels like a first stab at a new kind of game for Capcom. Although that company has plenty of games in their library, they aren't that well known for their RPGs. For a long while this would feel like the closest the company ever got to even making a proper RPG, at least until Breath of Fire. It's a tentative step towards some kind of grander adventure, putting it very much in line with Konami's own first tentative steps towards something grander with Castlevania II: Simon's Quest.

And while I poke at the game for its difficulty, I still found it much easier, and more bearable, than the first two entries in the Ghosts 'n Goblins series. While those are arcade-style games dedicated to punishing players and leeching their quarters (a difficulty that carries over even in their home releases), Gargoyle's Quest is constructed differently. It's tough but fair, purpose built to give players a long adventure instead of simply stretching out the short game with constant deaths and repeated play-throughs. Personally, between this kind of game and the arcade adventures, I'll take Firebrand's adventures every time.

Gargoyle's Quest: Ghosts 'n Goblins is not a perfect game. It's too short, too linear, and not quite fully-baked to really convey all the ideas Capcom was working on. Later games in the series would continue to flesh out just what Capcom started here, but as a first attempt it's a noble one. It has the right ideas, and shows the kind of depth that could be applied to the base of Ghosts 'n Goblins, lighting the way for even grander adventures to come.

As noted, this was Ghosts 'n Goblins first steps into the Metroidvania genre. This brings Capcom into the same pool that Konami had been playing in for a couple of years, and like with Konami's first steps it still had a ways to go before it reached true greatness. But clearly Capcom saw what Konami was working on and thought, "we can apply that to our own horror-themed games."

Of course, outside of that one connection, these series feel very far apart. This game, if anything, feels a little closer to Square's Final Fantasy Adventure, as it's an action-oriented game playing in the RPG pool, but the creativity on display dos showcase that Capcom knew what was going on around their own adventures and they wanted their own piece of the pie.