If you dig through the evolution of Japanese video games, you'll find certain trends that extend out of any one company. The various video game studios were all making their own games, but they were feeding on each other, and the desires of fans, fighting for the almighty dollar (or yen) on both sides of the pond, at home and in arcades. On trend that seems obvious once you look at enough Japanese releases, but seems baffling via only the thin slice of ports than the U.S. received, were the games that blended RPG elements and platforming game play.

I say it's baffling insofar as the games that we most associate with this style of game play, at least in the early days of the NES, were Zelda II: The Adventure of Link and Castlevania II: Simon's Quest, two games that seemed like weird outliers for their respective series. Of course, as our favorite series, Castlevania has evolved, especially in the wake of Castlevania: Symphony of the Night, this blend of action-platforming isn't an oddity anymore, but a main feature of the series.

Released back in 1991, Cadash (titled Kadasshu in Japan, a phonetic spelling of "Cadash") seemed like yet another in the line of action-RPG hybrid Arcade titles. Players could pick from one of four heroes -- Fighter, Mage, Priestess, and Ninja -- and then take them on a five stage adventure from the depths of a forest all the way through to the demonic castle to take on the evil Balrog (before being sent back to the hub world to fight the beast a second time). Along the way the heroes could buy equipment to upgrades their stats as well as collect key items that would grant them further progress deeper in the game.

What this sounds like, when explained that way, is a Metroidvania title, and the more we see of these titles throughout Japanese gaming history the more we have to admit that this was a major trend and not just a small sub-genre of the larger gaming market. Cadash wasn't a big title when it came out but it did add some intriguing ideas to the genre it was part of that helped to further influence the titles that would come after.

The choice of four characters feels a touch like Gauntlet when it's first described, but where those games were top-down arcade titles (before being ported as top-down console games), Cadash is a pure side-scroller. Each of the characters, though, does feel distinct and different, granting players multiple ways to play through the game (on their own or with up to three friends in arcades, one friends on consoles). The variety of the characters meant that the heroes could be teamed up in interesting combinations, using the Fighter's strength paired with the Priestess's defensive magic, for example, as a potent team.

The levels are also vast and maze like, especially by the mid-game. Although if you know what you were doing you could probably get through the game in an hour or so, the levels were large enough that players would likely spend a lot of time trying to map out the stages in their heads, grinding as they find pathways, that a casual play through would likely take much longer. Of course, that was seen as a benefit in the arcades as more time spent playing (and having to insert quarters at the various inns in the game to heal) would lead to more money made for the arcade.

Much of this was, of course, toned down for home consoles. Without the need to shove quarters in constantly, players could take a more sedate path through the game and not stress about how much time they were spending before their game-time expired. In fact, aside from some adjustments like this, and a few spots where the difficulty was smoothed out, the TurboGraphix version of the game is considered a fairly faithful adaptation of the arcade title (the Genesis version omitted two of the characters and is generally viewed less favorably). This all led to a game that was well-received by players, when they could find it.

But then, finding the game wasn't easy. In Japan it came out during a wave when all kinds of titles were starting to find that right mix of Metroidvania elements (the implementation here being decent, if a tad shallow, all things considered), while in the U.S. this game likely seemed too odd in comparison to all the shooters and fighting games that were coming to dominate Western attention. A find, side-scrolling adventure like Cadash couldn't compare to those titles, and the TurboGraphix didn't catch the world on fire. Cadash, then, was doomed to obscurity, no matter how fun its game play might have been.

Aside from simply being a side-scrolling Metroidvania title, this game does have some very clear elements that would seem to have drawn from, and then later influenced, the Castlevania series. Drawing from Konami's work, we have the Priestess, a heroine who travels around in armor and a skirt, battling the monsters with her extending flail. She carries a whip, essentially, and her game play feels very "Belmont like" in style and substance. 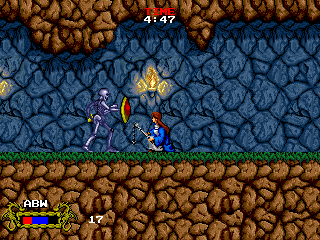 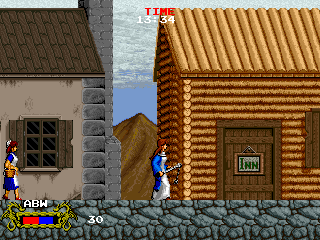 Beyond that, though, the multi-player action in this game would seem to draw comparison to later Castlevania titles Portrait of Ruin and, of course, Harmony of Despair. In fact, with its limited game time and harsh death penalties (as this was an arcade title), this game feel very "of a piece" with Harmony of Despair. Clearly the two were drawing from the same well (even if the Konami producers never actually heard of Cadash, which is a detail we simply don't know).

And, of course, there's the fact that the game is essentially a six-stage platforming game, which is very much in the mold of the original Castlevania. The older titles influence games that then go on to influence newer titles, and the cycle continues.