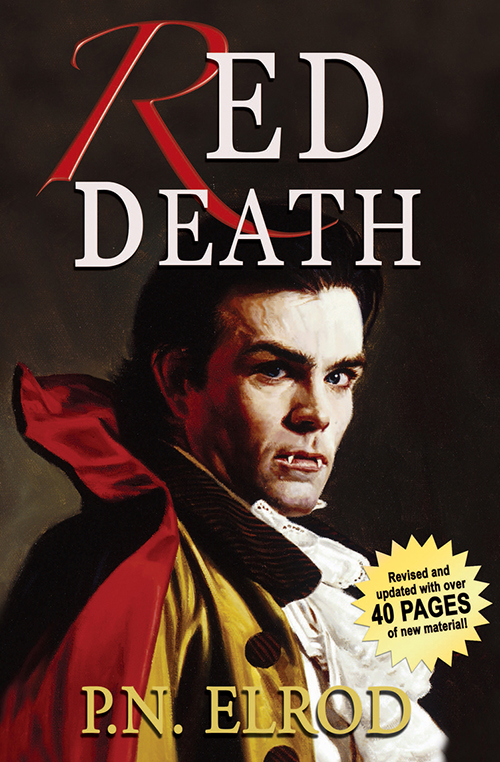 When a series is successful, finding ways to extend the brand makes a lot of sense. We see that in any media, but in the case of books more often than not a successful series will launch sequels and spin-off written by the author of the original work. It's dependable, in that way, as you'll know the voice of the new stories since it should be the same authorial voice that created the original novels. Readers like that as they can get into an author and find all the stories from them in a consistent way.

P.N. Elrod has written a number of successful vampire novels, with her most famous being Jack Flemming of "The Vampire Files" (the first book of which, Bloodlist, kicks off the series). When that series found its feet and grabbed a following, a spin-off series was inevitable. Thus, when another vampire was introduced in the third "Vampire Files" book, Bloodcircle, it was only a matter of time before that vampire, Johnathan Barrett, got his own series.

In late 1993 the first "Jonathan Barrett, Gentleman Vampire" novel, Red Death arrived, but frankly I think it's probably not the series fans were expecting. In fact, all things considered, it's not the novel that Mr. Barrett probably deserved. Instead of following the character from the point at which he was introduced in the main series, following his adventures in a 1930s setting (or later), the novel acts as an origin story for the vampire, following his early days before he turned. It's an interesting choice, to be sure, but by setting things as such an early prequel a lot of the excitement is drained out of the story.

Set during the early days of the Revolutionary War, Red Death follows you Johnathan Barrett as he prepares for a life away from home. He's been preparing to go away to university -- Cambridge, to be specific, and the Massachusetts one -- so he could study to be a barrister, following in the footsteps of his father. Although his proud papa isn't a rich man, Barrett and his sister both come from means thanks to their wealthy mother. She pays for the household, the servants, and the fine life they all lead on Long Island while she herself takes up residence in Philadelphia, PA. This is an arrangement that worked for everyone as, frankly, no one in their household could much get along with dear Mother.

Sadly, with the war encroaching on Philly, Mother (and her friends) return to the Barrett estate and, immediately, the matriarch of the household takes back over. Things become tense, heated words are said, and Mother lays down her rule with an iron fist. And, among the things she decides is that Johnathan will no longer go to the Massachusetts Cambridge but, instead Cambridge across the pond for Oxford University. Although initially reticent, Johnathan eventually accedes (as he honestly didn't have much other choice). And once he's in England he meets a most wonderful woman, Nora, who changes (quite permanently) his entire life...

The first thing to know going into Red Death is that, for much of its length, it's not actually a vampire book. Nora doesn't get introduced until well past the halfway point and, though it is obvious that she's a vampire, she doesn't actually transform our protagonist until much later than that (and the surrounding incident takes some time to play out). Despite this being the first book about "Johnathan Barrett, Gentleman Vampire", the vampire part of that title doesn't really kick in until the book is most of the way done.

This is a curious choice, to say the least. While I can understand Elrod's interest to slow-cook the eventual transformation of a character into a vampire, it's a weird choice to make since we're already in a world with an active vampire we know (Jack, in the 1930s). His transformation happens in the first chapter of his first book, and by the time Barrett's story was told we already had six books in the main series. We knew how vampires worked. We honestly didn't need a book watching a man slowly become a fledgling.

Had these books come out in a different order I think there could have been merit in the way this story was told. Start with Barrett, watch him slowly transform and then learn his powers, and then we kick into the 1930s stories with a different character and we already know all that we need to know about this vampire universe. Doing it the other way around would have made more sense. Doing it this way around drains a lot of the fun out of this origin story because now we're just waiting for Barrett to catch up on information we've known for (quite literal) years at this point.

There's also the fact that, at least in this first book, it doesn't feel like the author does enough with the 1770s setting to really make it worthwhile telling stories in this setting. 1930s Chicago might be far enough removed from modern readers at this point that some elements of the setting have to be explained, but we can still understand gangster and cars driving around the mean streets more than we can a quiet island off the coast of New York back in the days when electricity wasn't even a thing (let alone the whole of the Industrial Revolution). To make the setting work the author has to do something special with it, have some reason for setting the books back then and, well, Red Death doesn't make a strong case for it, at least not yet.

The major problem is that the Barretts are just far enough removed from the main body of the War that so much of it feel distant. Yes, English soldiers quarter on the lands of the island, and there are rebels that come through from time to time, but this is hardly different from a police force and criminals in Chicago, at least as far as Elrod uses them. Anyone expecting to find young vampire Barrett going out and doing his part to win the War for the Rebels will find, instead, an adventure that hardly feels like an adventure at all. Barrett is, quite frankly, a dull character this far back in his life.

Or maybe it's just the fact that there really can't be anything dramatic that happens to the character that affects what we know about him down the road. We know that any adventure he stumbles into, big of small, will still leave him alive. And while we do gain some affection for the characters around him, the book is told entirely from Barrett's point of view (first-person-limited). We don't get a ton of insight into the other characters simply because we can't from this perspective. Everything and everyone is at a remove, worsened by the fact that at some point they will all die (of old age, if nothing else) while Barrett moves on, still alive 160 years later.

Yeah, making this a prequel really causes more harm than good to the series. All the tension, all the zest is drained out of the story because, long term, we know where Barrett ends up. This novel (and its sequels) have to give us something truly new and interesting to keep us engaged because we know that nothing that happens here can negatively impact Barrett. He'll become a vampire, he'll learn all about his powers, he'll move on from this life into one (or many) more as the years wear on. SO what, really, is the point of this story? It doesn't illuminate anything for us and, as long as Barret remains far removed from the 1930s setting we last saw him in.

I think there could have been merit in telling his early days if they were somehow juxtaposed against an adventure set in a more contemporary setting (1930s or later on the timeline). Maybe Barrett could have met someone from his past and then, via flashbacks, shown us his early days. Parallel stories, old and new, would have allowed us to gain insight on the character while actually giving him something to do that could put him in peril. A complete prequel can never do that, and then Elrod stumbles out of the gate trying to commit to it anyway. I can appreciate the impulse but the book itself is lacking.