Queen of the Damned 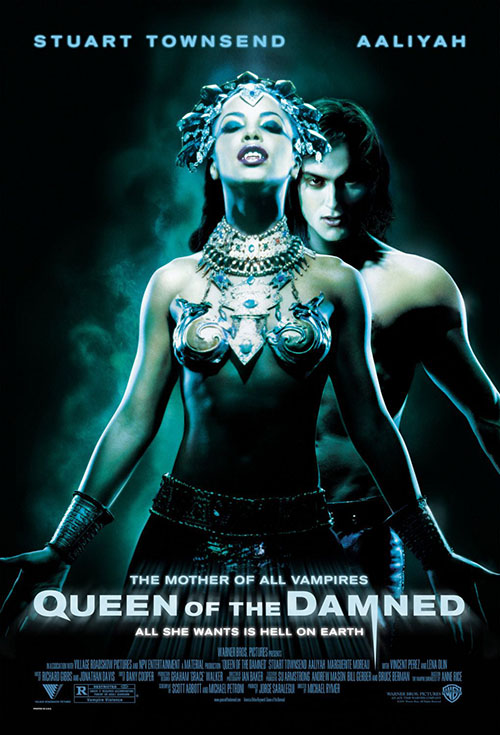 Say what you will about Interview with the Vampire but it was a bona fide hit when it came out in 1994. Yes, the film does have its flaws (like a boring performance from Brad Pitt in its lead role), but there's no question that it's a handsome and generally well made film that evokes a specific style and mood. It's a film that really captures that "longing, monstrous heart" so many people associate with vampires. It hits that note to a tee, perfectly, creating one of the best vampire films of it's era, hands down.

The same cannot be said, in any way, about its semi-sorta-sequel, Queen of the Damned. Released eight years after Interview with none of the same cast or crew, this film feels like it was made simply so Warner Bros. could sit on the license and continue to crank out Anne Rice films. It has none of the grace or ambiance of the original film, making it feels like a completely unrelated movie in every way. Although it does share one thing in common with Interview: it has a boring performance in its central role.

Despite Interview with the Vampire being based on the first book of the "Vampire Chronicles" series, Queen of the Damned makes the odd decision to skip to the third book, grooving right past most of the character development for Lestat (here played by Stuart Townsend). Instead we find him, at the start of this 2002 movie, waking up from a long slumber (despite, in the last film, him waking up from a different long slumber already). He hears the faint strains of rock music and follows the tune, finding an industrial band in need of their big hit. Well, what's a vampire to do except take over the band as the lead singer and songwriter, driving the band to sudden wealth and glory.

The thing is that in the process of making the band a smash success, Lestat also comes right out and reveals that he's a vampire. While the humans all think it's an act -- vampires aren't real -- the actual vampires are pissed. They've lived for years with their existence being a (rather poorly) guarded secret and they aren't looking to shake up the status quo. Certainly the humans that study (and hunt) vampires are curious at this turn of events, and that includes researcher Jesse Reeves. She finds Lestat fascinating, so she works to track him down. But she may have competition for his heart as another woman, a much older woman, has designs on his eternal existence. She's Akasha (Aaliyah), the mother of all vampires, and she plans to rise and rule the Earth once more. 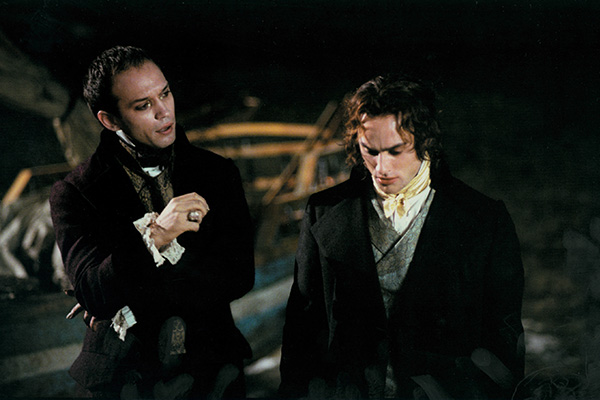 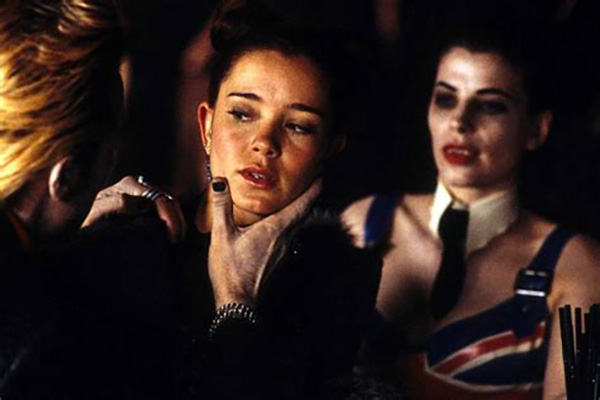 Despite being a boring slog of a film (and it's really is a boring slog), Queen of the Damned has a whole lot going on within it. Too much, I'd argue. That's a main reason why nothing in this film really works: to get all its various plot lines in place it has to info dump a whole heck of a lot of story, breezing through all of it to keep the run time down around 100 minutes. That means every new character, every new idea, all the plot points are all glossed over just so we can get to the big climax and have everything resolve nice and neat. It creates a giant mess where nothing sticks.

Take Lestat. In flashbacks (borrowed from The Vampire Lestat despite lacking the context of that book) we see him find the bodies of the Queen and King of the Damned and, for whatever reason, he decides to play violin music for them. This gains him the favor of the Queen and, despite being basically stone, she gives him her blood which he finds intoxicating. Then, soon after, she disappears and he spends the centuries after pining for her.

This doesn't work in the context of the character we know, though. With this film being billed as related to Interview, that means we already know where Lestat was for hundreds of years as he traveled around with Louis (and then spent time in the dirt healing after almost being killed). We know that while he likes music, it's more as something to flirt with. He never mentions the Queen, and never spends any time looking for her until, spontaneously, just now, in the modern era. And all because... why?

If we take this as a standalone film, though, then nothing about Lestat comes into focus. As presented in just this film he's a pretty boy dandy that loves to play rock music and, what, make fun of other vampires. What about this version of the character, free of context of the previous film, makes him an ideal partner for the Queen of the Damned? She seems to like him just fine here, killing her previous partner so she can make Lestat her new king. It's just that the film doesn't put in the legwork to make their union function. It exists for the sake of existing, simply because it was there in the novel. 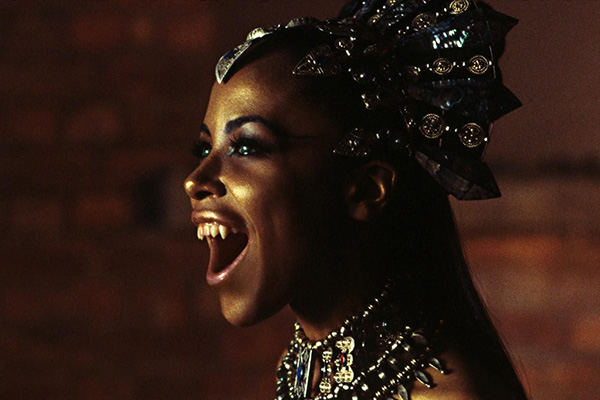 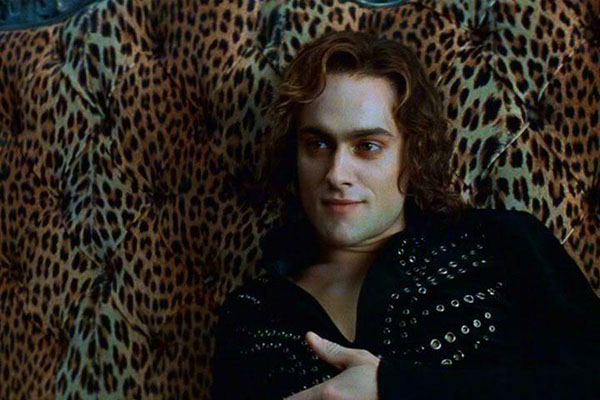 Or let's look at the Queen. She's presented as an all powerful vampire bad-ass who can set other vampires aflame, a power we've never seen before. She decides to go on a vampire hunt to take out anyone that wants to kill her precious Lestat, which means we're supposed to like her? But then she also kills as many humans as she likes indiscriminately, emptying whole villages to sate her thirst. That makes her a villain, even in the eyes of Lestat. Except... why? Lestat likes killing, and he kills his fair number of humans in this film. The movie never does a good job of saying why Lestat is a "better" vampire than the Queen, why he deserves to live while she doesn't. Nothing about her, or him, is at all consistent.

And that doesn't even begin to get into the various other factions that aren't explored with any real depth at all. There's a group of vampire researchers that, presumably, also hunt the vampires... except we never really see them do that. There's a group of vampires that run their own council, who both want Lestat dead but need him alive. Or maybe it's two different councils. The fact that the film just dumps these groups in without any real explanation and just assumes we'll know or care who they are shows how little effort the film puts into its characters. Nothing is developed, nothing gets the time its needs to really work.

Ideally this movie would have been three or four films. One movie just focused on Lestat's past, adapting important portions of The Vampire Lestat, would be needed to build him up as more than a villain. A second film to show the past of the Queen, and then the time of Lestat wooing her to develop their romantic connection, is also needed. Then we can finally get into the modern day, maybe with one film focused on the vampire hunting council chasing Lestat, only to then adapt the rock band portion (and the other vampires), leading to the Queen's resurrection and the reunion between the two. That gives all these story elements time to breathe and develop. This film just smashes them altogether and says, "eh, the audience will care." No, we won't.

About the only part of the movie that worked in any context wasn't even in the movie itself, and that's the soundtrack. Due to issues between Warner Bros. and Sony BMG, musician Jonathan Davis (of Korn) could write all the music for the film, and he could perform it for the film, but a different version of the music with other singers had to be put together for the official soundtrack. I have that soundtrack CD and it's great, with a good set of singers from bands like Disturbed, Static X, and Linkin Park, adding their vocals to the tracks. Those guys can sing, Johnathan Davis can't, so when you hear the music in the film it rakes at the ears. It's so awful. The soundtrack is great, the soundtrack in the film is laughably bad. 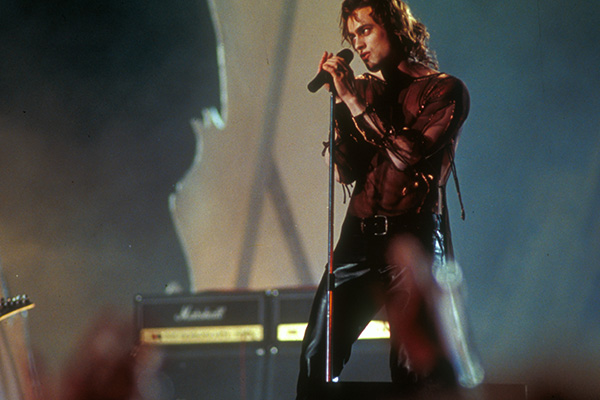 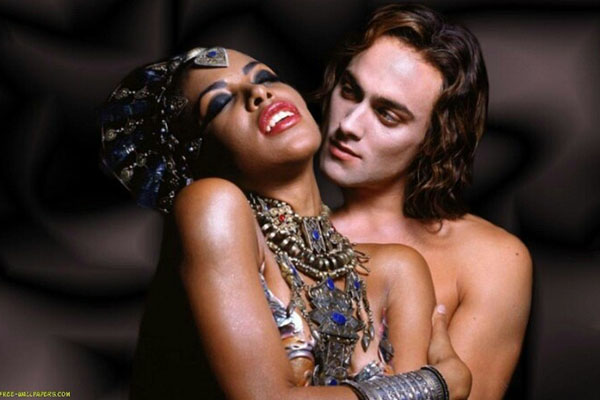 Queen of the Damned is a complete cluster fuck of a film. It has bad actors in lead roles (especially Townsend), relegates good actors to lesser roles, rushes through its story, and can't even nail the one part you'd want from a film about a vampire that starts a band (the music). It's just a bad film, through and through. If you absolutely want a good experience from this movie, go and grab the original version of the soundtrack. That disc is great, everything else about Queen of the Damned should be put back into the dirt so it can sleep the eternal slumber, never to be seen again.