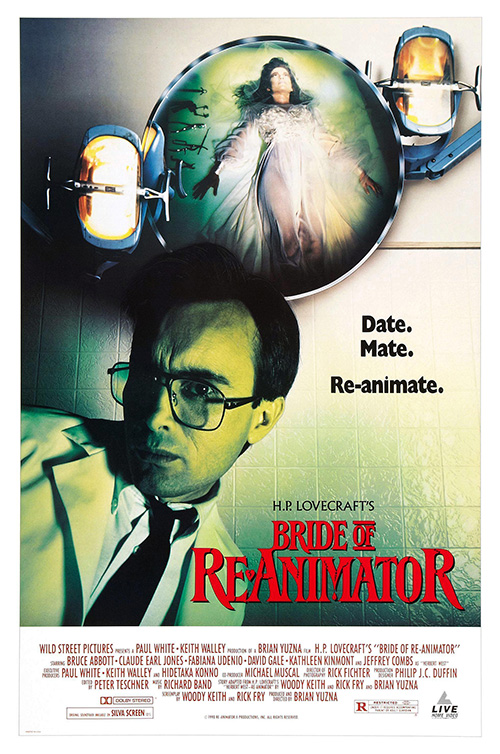 I'm of two minds about the sequels to the original Re-Animator. On the one hand the original film is such a joyously depraved film that you almost hate to see any sequels come out and dilute the original's charm. At the same time, because it was just so bonkers you want to see where else the creative team can take the series. Is it possible for them to find more weird and gonzo ideas for the series to pursue. Can the films get stranger and stranger? Because, if so, as a viewer you'd think you'd want to see that.

The good news for fans of the original is that, yes, the first sequel, Bride of Re-Animator, does manage to find that same gonzo charm as the original and push it into weirder and darker areas. If all you wanted was a film that got as trippy and strange as the original, you've got all you need with this first sequel. At the same time, though, this film tends to lose the narrative threads that made the original more than just a theater of the grotesque; there are characters here, but they all act largely in service to the horrors, with only the slightest thread keeping it altogether. It's a thinner, loose affair than the original that really only comes alive when the horrors come out.

Set some time after the events of the original (five years real time, and at least long enough for Bruce Abbott's character to grow a power-mullet and forget how to wear shirts), the opening of Bride of Re-Animator sees our two "heroes", Bruce Abbott's Dr. Dan Cain and Jeffrey Combs's Dr. Herbert West (who rightly gets top billing), working in a war-torn third-world country where West is, of course, continuing is horrible experiments. Realizing he's done all he can to further his research out in the sticks, West tells Cain they they have to return home, that there's more they can do in the course of creating life. So, they both travel back to the states, renting another house where West immediately takes over the basement to do all the crazy things he wants to do.

West's plan this time is to try and create a whole new life, one built from the pieces of corpses so that the new body can have a fresh and proper start. Going through the evidence of the old horror show back at their teaching school, West finds Megan Hallsey's heart (Meg being the past lady-love of Dan), still preserved as if years haven't gone past. Realizing the potential for all the parts he wants to work with, West takes the heart and convinces Dan they can "resurrect" Megan via her heart in a new body. From there it's time to build their "Bride" while the cops (and a villain returned from the dead) are hot on their trail. 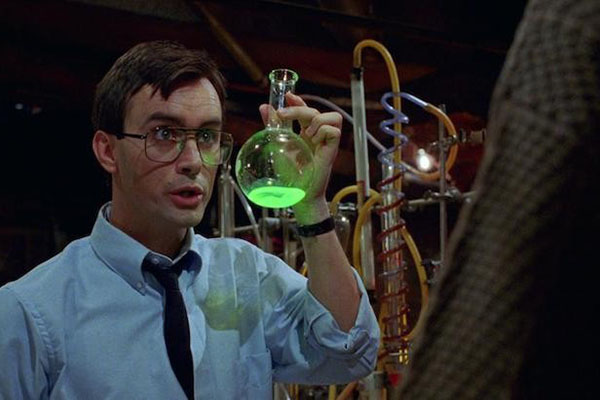 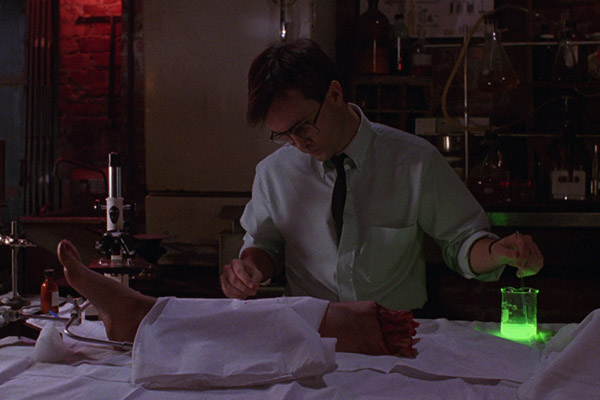 Story-wise there really isn't much to Bride of Re-Animator -- in that regard the series once again nicely parallel the Frankenstein movies with story getting pushed aside for more bonkers mad science. Where the last film had star-crossed lovers, a mad scientist bent on stealing West's work, and a battle with the school's Dean over the fate of their academic careers, this film makes only a passing effort, at best, at retreading many of the same plot points. It's the first Re-Animator once again, just the strange little heart removed (only to get stitched back in, both metaphorically and literally, in the last act).

In that regard it makes it much harder to care about any of the characters. Dan is a empty character at this point, just a guy that hangs around West and occasionally chats up a girl who really should realize there's something wrong with West and Cain. The head of the evil Dr. Hill (Gale) is back as well, and while having his weirdo head rasp on about evil things is amusing (and the film makes a late game change to him that's just as wacky as you'd hope), the luster of using him as a villain has certainly worn off after a single film.

No, all the charms for Bride of Re-Animator come from Combs's West, still the best part of the movie (there's a reason hes the only character to make the transition to the third film). Combs's performance continues to be fantastic, equal parts cold baster and crazed lunatic. He has these little ticks, these moments where you can see the gears spinning as his mad doctor thinks, "should I really do this..." before he goes ahead and does it anyway. It's a total delight. If not for the return of West's character, this film wouldn't work at all.

The moments without West are the slowest in the film, but thankfully the film cranks everything up past eleven for the big last act, once the two doctors are done building their Bride while Hill manages to take control of all the undead beasts West has been creating (because he just can't stop himself) and unleashes them on our hapless protagonists (I guess carrying over the hypnotism plot line that was excised from the original film for some reason). You have all these abominations that West has created, animated limbs and half-man/half-dogs, weird mutants and stitched together monstrosities, all clamoring around, while the Bride cackles and moans and then grotesquely falls apart, the film ratcheting up the weirdness more and more all while Hill's head (literally) flies around the lab. My god it's a wonder. If the whole film could have been like this it would have been a total winner (and also completely exhausting). 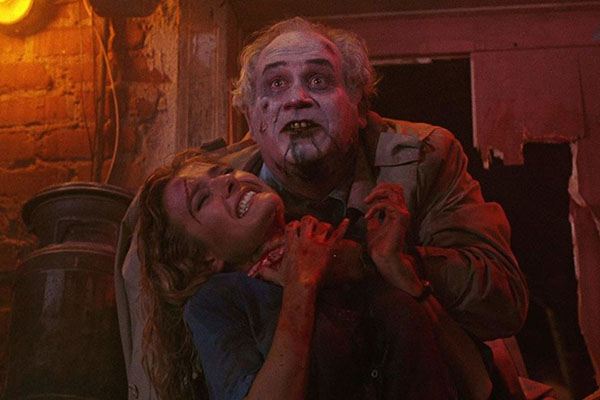 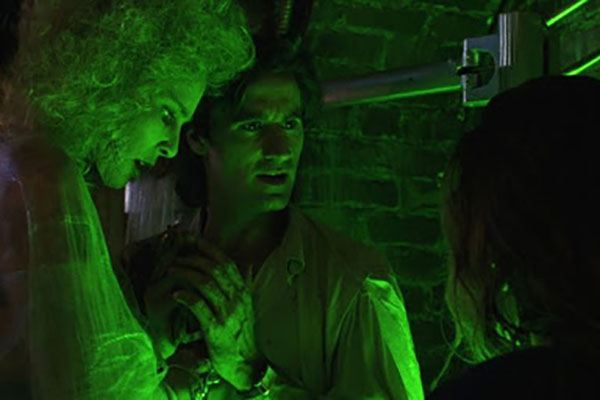 When the film finds the right pace and can really unleash its madness, Bride of Re-Animator becomes an absolutely awesome sequel to the original. The film isn't able to hit that stride very often, or for very long, not up until that last act, and that's why it's not anywhere near as fondly remembered as the original. There's no truly outlandish moments, no beasts intestines exploding out of its body to rope one of the heroes, not scene of the severed head going down on a victim. The film is bonkers, and loopy, and gross, but never quite as far or as high as the original.

I've watched this film four times now, though, and I have to admit that I rather like it for what it is. It's not as good as the original, but once you get past that it does have it's own gnarly charms. It's a silly, weird, but enjoyable film that still manages to pick up the torch of the original and push it just a little further. No one is going to try and argue this film is up to the heights of the first one, but if all you want is another bonkers film in the Re-Animator universe, Bride does that with just enough style to please the hardcore fans.