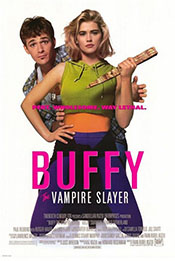 In every generation there's a slayer... Wait, no, this comes before that. Buffy is a cheerleader. A vapid, bubble-headed, blond valley girl who really doesn't care about much more than the next big game, the next dance, and eventually marrying Christian Slater (who was very popular at the time this movie came out). That all changes, though, when she meets Merrick, and older gentleman who manages to cajole her into meeting with him at a graveyard. There she sees a vampire rise from the grave and has to fight it off. That's when she learns her true calling: she is a slayer, one chosen by higher forces to defeat the vampires.

It's a good thing she's been chosen, too, because an evil, centuries-old vampire lord, Lothos, has come to L.A. and is stalking all of humanity... and Buffy in particular. Aided by Merrick, as well as eventually ally Pike, Buffy will have to defeat the forces of darkness and save the city as well as the Senior Dance.

Let's start by stating that while Buffy 1992 is fun and goofy it's also not great, certainly not in comparison to the television series that eventually came after. There's the core of a good movie in it but the film treats the material far cheesier than was needed producing a movie that feels more like a B-movie than it had to.

What works is the concept. The creator, Joss Whedon, has stated in the past that his idea was to take the poor blond girl that always gets killed in horror movies and make a film where she's the hero. With Buffy, the character, Whedon had his girl and, even in this first effort, her true character shines through. There's something interesting about the vapid girl that's always offed in the first reel finding her inner warriors and taking on the bad guys single handedly. 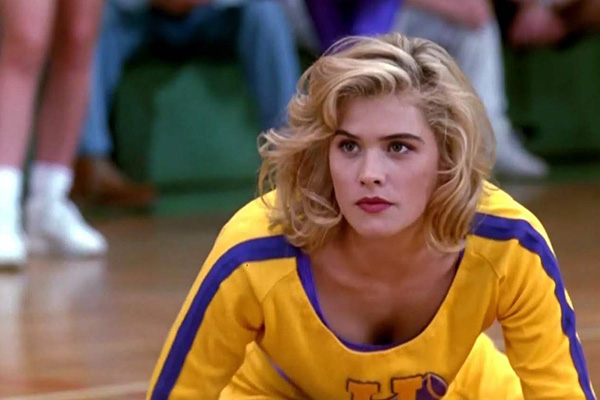 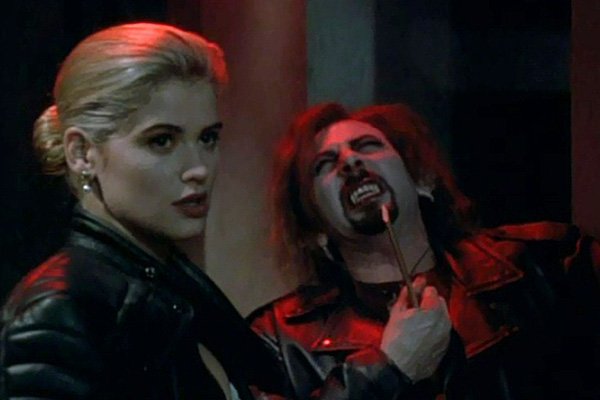 Sadly for Buffy her actress, Kristy Swanson, really isn't up the challenge of playing the girl. Sure, in the quiet moments Swanson can convey Buffy. The actress is quite good at playing the early Valley Girl sections and makes a half-way okay job of showing the toll the training and fighting is taking on her character. However, when it comes to actually being a warrior, to making her fight scenes look good or conveying the emotions underneath, Swanson can't perform. Maybe she found the action scene silly or just wasn't up to the task of making it look good -- whatever the case, her Buffy is at her weakest when she's actually called on to fight. It all just looks goofy and dumb instead of having any kind of thrill to it.

Of course, the silliness is then amplified by all the decisions of the director and the various improvisations of the cast. Don't get me wrong, I love Paul Reubens in this movie -- his vampire, Amilyn, steals all the scenes he's in, from his early lines of "kill him a lot", to his final death sequence (which gloriously goes on and on). However, the tone of his scenes runs counter to what the film seemingly wants in his moments creating some pretty stark tonal shifts. This isn't helped in any way but Rutger Hauer who is definitely not taking anything in the movie seriously. When he's not bored by his character Lothos he's eating through all the scenery (which again leads to massive tonal shifts in the film).

Of the cast the member I like the most (ignoring Rubens performance for obvious reasons) is Luke Perry. Although I'm not a Perry fan normally (as I'm not a girl who was born in the mid '80s which is Perry's prime demographic), I've always liked his character. Pike is dumb but in the right kind of way. Much like how Buffy is supposed to be the blond girl that somehow survives, Pike is that dumb guy at parties the killer always takes out halfway in but, because Pike meets up with Buffy, he ends up living. Perry is able to find the right tone for Pike crafting a character that not only seems to fit the proper tone of the movie but also wouldn't be out of place showing up in the later television series.

Really, Buffy 1992 works best when viewed as a pilot for the eventual series. It helped to prove that the concept worked even at it's cheesiest. It's fun and stupid and just wants to be liked. So while it's not good it is at least fun to watch.