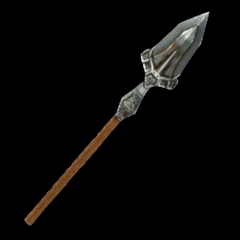 Polearms are long weapons that have been used on the field of battle since humanity first started using tools in combat. Considering the shape of polearms which, at their core, are a long shaft with a pointed head of some kind, it's easy to see how early hunters and gatherers could come up with the design for the weapon. Grab a stick, smooth it, sharpen it, and you're ready to go. It's the kind of weapons that instantly understandable: pointy end goes in the other guy.

In the Castlevania series polearms came to prominence with their inclusion of the Alucard Spear (mistranslated as the Lecarde Spear or the Alcarde Spear, and also known as the Witches's Lance in the UK) in Castlevania: Bloodlines. Wielded by Eric Lecarde, this magical weapon proved to have power and magic equal to that of the famed Vampire Killer used by the Belmont Clan. It was a vampire hunter weapon of beauty and grace, crafted to aid in the fight against all evil.

Since that game spears have been regularly included in the series, gaining traction as alternate weapons for heroes to use in most of the Metroidvania titles on the GBA and DS in the Castlevania series.

About the Alucard Spear:

History of the Spear

Created years before the events of Castlevania: Bloodlines, the Alucard Spear was designed to act as a compliment to the Vampire Killer. Alucard crafted it to have the same power and vampire killing abilities, just in a polearm form. Although he did not wield it himself (not canonically, although it is a weapon Alucard could find and use in the Sega Saturn edition of Castlevania: Symphony of the Night) he did pass the weapon on to a worthy users: the Lecarde Clan.

Eric Lecarde, young when he first gained the spear, used its awesome power in two instances. The first was in a battle for the very timeline itself. Young though he was, aged only twelve in his first brush with destiny, Eric swung the spear like a pro, stabbing and lunging with grace and power. With the spear in his hands he was able to turn the tide of battle for the good, helping to maintain the timeline and ensure that true evil from the future, the foul beast Galamoth, would not take over the time stream.

Eric was called into battle again much later in life when he joined his friend, John Morris, in taking on the evil of Elizabeth Bartley and her uncle, Dracula. Eric had his own score to settle as his fiance, Lucy Seward, had been killed by the vampiress Bartley. With his friend having the Vampire Killer, Eric grabbed his spear and the two went into the lands of Dracula's Castle, and beyond, to fight and kill the vampires.

The spear appeared one more time (officially) in the time of John's son, Johnathan. Having inherited the Vampire Killer when his father died, Johnathan, joined by his friend, the sorceress Charlotte Aulin came to Castle Dracula when it once more appeared on the cliffs of the Borgo Pass. There the two heroes were met by the stranger, Wind. Wind was actually Eric Lecarde who had died some time early in the castle having come here on a quest to find his daughters, Stella and Loretta, who had been captured by the evil vampire Brauner. Sadly he failed and died for his effort.

Although Wind was unable to directly participate in the battle ahead at this point he was able to give aid and guidance to the two young heroes. Additional, when Johnathan proved himself, mastering the power of the javelin sub-weapon, Wind gave his own spear, the Alucard Spear, to the vampire hunter. Johnathan thus became the only person in the history of the weapons to wield both the Vampire Killer and the Alucard Spear at the same time. 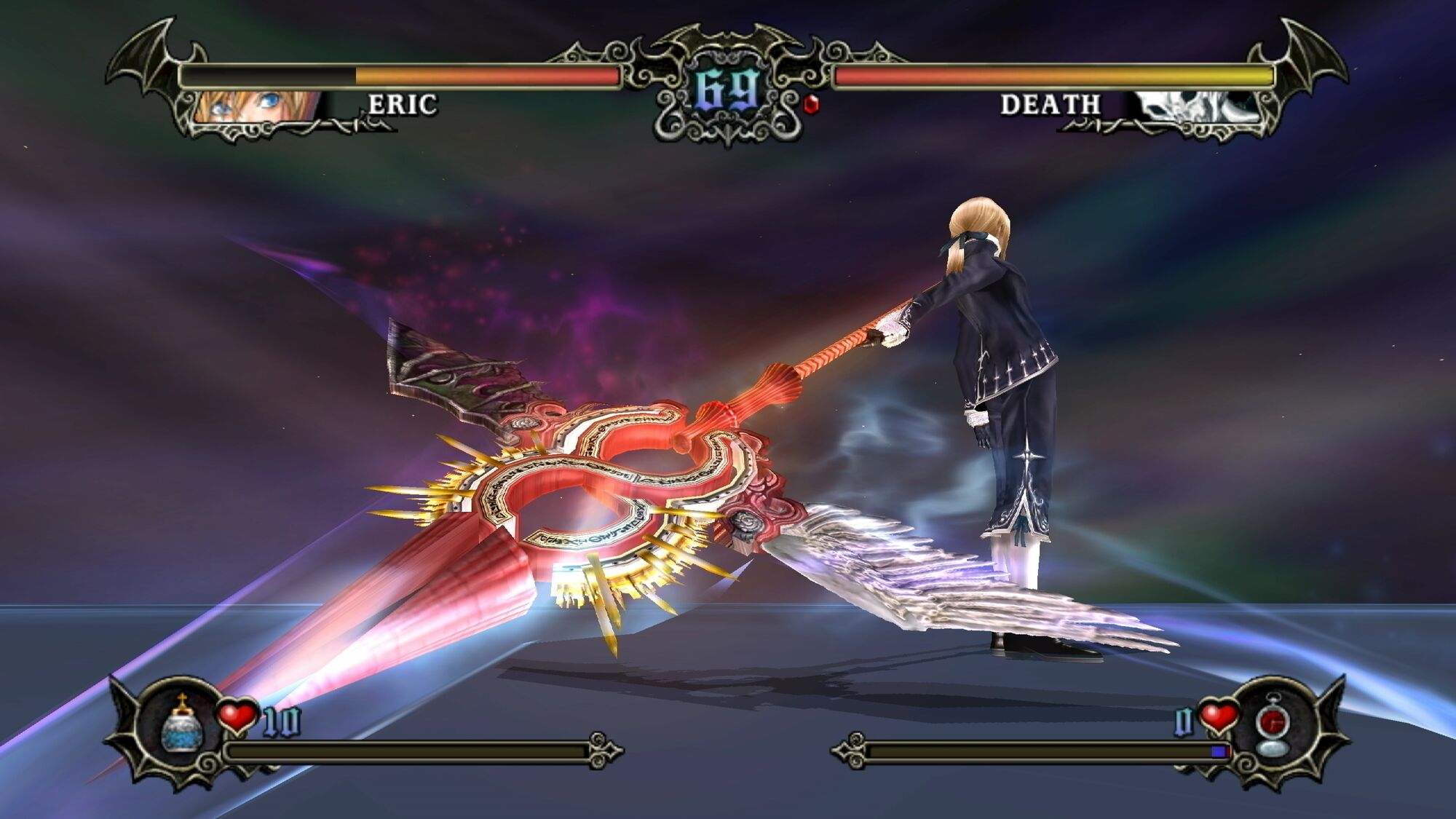 With the introduction of the Alucard Spear in Bloodlines set the standard for how spears would be used in the series. When Eric swung the spear he did it with a forward stab. The length of the spear jutted out, not unlike the lash of John's whip just without the large swing behind the back that the whip had during an attack. Like the Vampire Killer, the Alucard Spear could be upgraded three times in the game, until it reached the fourth level, a flaming version of the spear with a wide, winged head. Taking damage while at the fourth level did put Eric back at his third level version, a trident, but it could be upgraded again.

Although with its offensive prowess, of which the Alucard Spear certainly was substantial, the spear also gave Eric some maneuverability. He could kneel and charge up before using the spear to vault high in the air. This gave Eric a degree of maneuverability to match John as where that vampire hunter could use his whip to latch onto ceilings and cross wide gaps, Eric could vault up to hidden areas to continue his exploration of the various evil realms.

Chronologically (by order of game releases), Alucard was the next to gain the magical spear. When Alucard found the spear in the Saturn Symphony of the Night he used it in a slightly different form. He swung the spear more like a sword in a wide, forward slash (likely due to this being his standard attack animation). He could also perform two special attacks with the spear. One was a whirling blade in front of him, performing multiple quick stabs in a row. The second attack saw him perform a very long stab with the energy of the spear extended from out from his person, dealing a substantial blow.

Although Soma Cruz didn't get the Alucard Spear he did find other polearms -- spears, tridents, lances -- that he could wield in Castlevania: Aria of Sorrow. These he'd use in a stabbing motion, creating a low arc from down-forward to forward. His motion changed, though, for Castlevania: Dawn of Sorrow as he then performed a more "default" forward thrust as Eric had done years prior. This forward thrust was the same for Johnathan in Castlevania: Portrait of Ruin (with their animations being the same between games).

It is worth noting, though, that with the Alucard Spear in hand Johnathan could perform his own special move. He could launch himself in the air before crashing down to the ground, stabbing the spear viciously at anything caught underneath. These various attacks -- the stabs, the slashes, and the downward ground-stabs -- all were reflected in Eric for his final appearance in Castlevania: Judgment. The various combos Eric could perform in that game seemed inspired by all the spear moves to come before in the series.

The halberd was a long polearm with a small axe blade, a long point on the end, and a curved thorn on the back side used for pulling combatants off of mounts. It hailed from the 14th through 16th centuries.

The lance was a pole weapon normally used on horseback. It's inclusion in the Castlevania series is interesting as the heroes don't tend to ride horses in the game (outside of Richter Belmont in an opening sequence of Castlevania Dracula X: Rondo of Blood).

Designed as a polearm with a a long, curved blade, the naginata was used primarily in feudal Japan (although a similar version, the guan dao, hailed from China). The pole had a hand guard on it, while the blade was mounted on the end, bound with leather.

The partisan (aka "partizan" in the series) was a European polearm with a spearhead with wide protrusions designed to aid in parrying opposing thrusts. It was used primarily in the 16th, 17th, and 18th centuries up until the advent of firearms in war.

Is part of a class of polearms used in feudal Japan for capturing suspected criminals. It had a broad, forked head that could go around a limb or neck and then used to restrain the criminal until they could be surrounded and captured.

Often used in spear fishing, the trident is a polearm with a three-pronged head (the "tri"). It's association with spear fishing is also the reason why it became a common symbol for aquatic creatures and gods, such as Neptune and Triton. 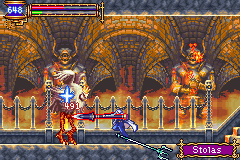 Attributed as a "demonic five-pronged spear", the Brionac doesn't appear to be based on any specific myth. It does, however, frequently show up in various fictional productions from the Final Fantasy series, to Xenogears, to, of course, Castlevania.

The Geiborg (aka Gabolg) is a mistranslation of Gae Bulga, legendary spear wielded by Cu Chulainn, the demigod of Irish, Scottish, and Manx mythology.

Known as Odin's thunderbolt, the Gungnir (mistranslated sometimes as the Gungner) is often depicted as a lance in adaptations of Norse mythology and popular media.

Known as the Spear of Longinus (or also in Castlevania: Aria of Sorrow, mistranslated as Ronginus's Spear), is the spear that pierced Christ's side. This made it into a Holy Lance, at least as far as the Castlevania series is concerned.

Used by the Monkey King, Sun Wukong, the Nyoi Kinko Bou (shortened as Nyoi-Bo) was a pole that could magically expand and contract.

This page covers the standard polearms found in the series, those with a natural stabbing motion. However, two other kinds of weapons do appear in the series that are worth mentioning briefly. Battle axes (or great axes) are a different kind of polearm and, generally in the series, they were swung like great swords. Meanwhile javelins could also be considered polearms (ones that are thrown); they made appearances late in the series as one of the many kinds of sub-weapons Johnathan could find and master.