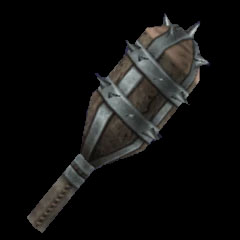 The staff is one of the earliest alternate weapons in the series. Although whips were commonplace, appearing in every game of the series up to the launch of Castlevania III: Dracula's Curse, it was that game that brought in multiple heroes each with their own, unique uses in battle. The staff-wielder was Sypha Belnades, and what she lacked in power from her relatively mild melee weapon she more than made up for in power.

Generally staffs, and other weapons of their ilk like rods and clubs, are not the most powerful weapons in the games. However, their association with magic-casting folk has given these rods powers behind their simple melee abilities. Effective use of clubs in combat required mastering their magical abilities to make the warrior more powerful than seemingly possible. A properly used staff was better than any sword, in the right hands.

First used by Sypha, the Belnades Staff is the rod through which she channeled her magical abilities. Though she could tap into the great powers of her clan, casting magics of fire, ice, and lightning, her club was not very effective as a melee weapon. It was slightly weaker than the Belmont whip, the Vampire Killer. It could get the job done, it was true, but only in a pinch when spells weren't an option. 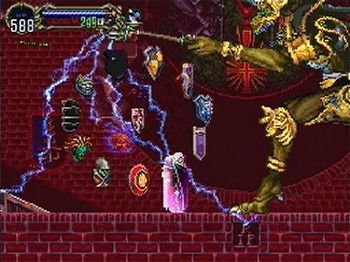 Notably, the Belnades Staff would show up again in the series, now wielded like a club by Yoko Belnades The staff, by this point so enriched with power, could heal a small slight of health for Yoko with each melee hit (it also gave her that same healing for her low kicks as well, maybe implying that it was Yoko, and not the staff, that did the melee healing). For a quick spot of healing, as needed, Yoko had the melee help to aid her team.

Beyond the artifact of the Belnades clan, other staffs, clubs, and rods appeared in the series. Various basic clubs were introduced in Castlevania: Symphony of the Night, from the basic mace and morningstar, to the more impressive the Holy Rod (good against the undead), Moon Rod (which has a special attack that could shoot out crescent moons), and the incredible broken Shield Rod. The Shield Rod could pair up with any shield in the game, giving Alucard a variety of bonuses. The most powerful bonus was the Shield Rod + Alucard Shield, which would give Alucard every bonus plus allow his shield to do contact damage per frame, liquefying enemies.

Hammers, treated in the series like clubs, first appeared as a magical effect in Castlevania: Circle of the Moon before officially becoming equip-able weapons in Castlevania: Aria of Sorrow with the hammer and the warhammer. That game also featured the Talhammer (aka Mjollnjr, the lightning hammer of Thor), which then made regular appearances in later games as well. There was also the great sword Excalibur which, with stone still firmly attacked, was very hammer like.

Castlevania: Dawn of Sorrow reused the mace, morningstar (aka the "morgenstern" here, likely a mistranslation), and Mjollnjr. And then Castlevania: Curse of Darkness brought in the jokey piko-piko hammer and the frying pan along with eh previous hammers to flesh out the collection to its fullest. Also, notably, a variety of rods were introduced as Innocent Devils, various mage-type critters that could be summoned to fight alongside hero Hector on his quest.