Cestus and Other Punching Weapons 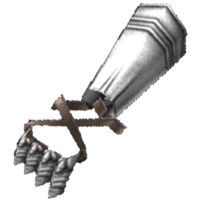 Cestus is a term that applies to a class of weapons. First featured in Symphony of the Night, these weapons (when equipped) allowed Alucard to punch things with reckless abandon. Of course, if Alucard went around without any weapons equipped he would also punch things, but the cestus-class weapons would allow his to punch harder, dealing more damage. From there, the weapons have shown up in a few games, allows allowing the hero to perform quick, close-up strikes to their foes.

The term "cestus" comes from Latin, caestus, which means "striker" (more or less, as is the case when translating any foreign language into English). The original cestuses (or either caestus or cesti, if you feel like using forms of the Latin plural) were used in Ancient Greece and Rome and were like boxing gloves with a much ore damaging purpose. Made of strips of leather wrapped around hand, sometimes with metal bands fitting inside or spikes or claws on the exterior, these were weapons to do damage, not just fighting in a ring for sport.

Of course, the flaw of a cestus (as we'll discuss below) is that they have to be used up close. You don't get any range with your fists (well, unless you're Hard Man in Mega Man 3) so using a cestus leave you open for attacks from your foes. Their benefit is their speed, but they are meant only for those who can put an enemy down quick (or are fleet of foot).

Although some weapons in the series, such as the ever famous Vampire Killer, have long and elaborate stories, cestus-type weapons do not have the weight of a storied history behind them. First appearing Symphony, these weapons have shown up in four games so far, including Curse of Darkness, Dawn of Sorrow, and Harmony of Despair. In each case, the weapon provide the hero the opportunity to get in quick attacks at their foes at the expense of a defensible position.

Remember, these are fist-wielded weapons, such as knuckle dusters and iron gloves. Your character will be punching their foes, so the length of their attacks is the length of their arm, nothing more. There is no range to these attacks, no way to get back out of danger quickly if your foe is already launching their own attack. Enemies that telegraph their attacks make using a cestus easy, but for all other foes you may want to uses a whip or sword instead (or a gun, if you have one -- strike from a distance).

Balancing out this weakness, though, is the fact that the cestuses are fast. In the span of a single sword swing your hero could lay in three or four punches, and while the damage output may not be high, if you can deal enough damage to fell a foe in that time it doesn't really matter how much more damage a sword could have done.

For the most part, though, a cestus is only useful as an early-game weapon (such as for Alucard as he's exploring the Alchemy Lab). Once the enemies start using elaborate attacks, blows with some range to them, the cestus quickly loses its luster. They're great against weak foes, but you're better off with a sword in the late game.