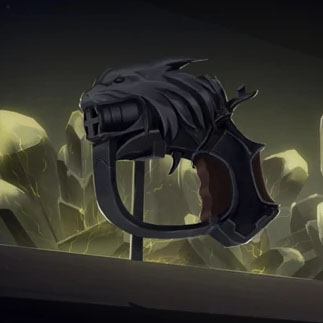 Introduced in Castlevania: Symphony of the Night, Agunea is one of the newer sub-weapons in the series (in so far as a sub-weapon introduced all the way back in 1996 can be considered "newer"). A powerful lightning attack, the sub-weapon added in a new attack type that vampire hunters could use. Interestingly though introduced in Symphony, the sub-weapon never actually appeared as a sub-weapon again, instead becoming a orb combo, or an innocent devil attack, or a glyph. That makes Agunea not only one of the newer types of sub-weapons in the series but also one of the rarest as well.

The sub-weapon likely draws is name from Slavic mythology. Agunea is the youngest son of the fire god Svarog. It was said that Agunea's role was to purify the righteous with fire from the heavens. It's logical, certainly, then to think that "fire from the heavens" equates to "lightning", thus giving the weapon its name.

Also worth noting is that the exact look of the sub-weapon was debated as its original icon was tiny (in Symphony of the Night). It wasn't until much later, in the second season of the Netflix Castlevania series that a better depiction of Agunea was given. There the weapon resembled a pistol-type weapon, which lines up well with how the weapon was fired and it's overall effect. It makes the sub-weapon into a kind of Medieval taser, an interesting (and amusing) choice for the Castlevania series.

Like a taser, the Agunea will shooting out a targeting node when fired. Once that node hits, a bolt of lightning would then arc out to the targeted source. As long as the attack button was held down lightning would continue to fire off at the target, dealing damage (but draining hearts). This could result in a ton of damage dealt in a very short period of time. Of course, once the player's hearts ran out the attack would stop (and you better believe this weapon could drain the hearts quickly). 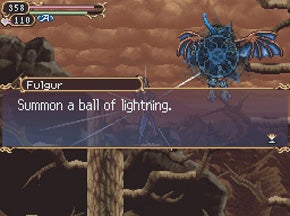 Of course, since Agunea was available as a sub-weapon to Alucard in Symphony of the Night it was also available when Richter Belmont made his run through that game (in the "Richter Mode" option). Richter could use the weapon like normal but he was also able to crash the item, creating a powerful, screen-filling blast of lightning that damaged everything that could be seen.

It's only supposition but it's possible that the Agunea didn't show up again in its sub-weapon form because of how powerful and damaging it could be. It may have been thought that, like so many other items and weapons in Symphony of the Night, the Agunea needed to be tweaked down, made a little less powerful. That certainly explains why it was harder to get the power of the Agunea, and why it could arc out as solid of damage, in its further appearances in the series.

After Symphony of the Night the Agunea made further appearances, although not as a direct, easy-to-use sub-weapon. It's second appearance was marked in Castlevania: Lament of Innocence. Here the power of Agunea could be accessed via the Cross + White Orb, resulting in the same effect as expected from the original sub-weapon. This effect appeared again in Lament's sister game, Castlevania: Curse of Darkness, this time as an Innocent Devil power. The Mage-type Ogre Rod could blast enemies with continuous lightning damage (at the cost of 20 Hearts per cast).

A couple of attacks were similar to the Agunea, although didn't go by that name their respective games. Castlevania: Aria of Sorrow had the red, bullet soul Plasma Blast (received off the Lightning Dolls) which would create an arc of lightning in front of hero Soma Cruz when used. It would deal a massive amount of damage, at the cost of 46 MP, making it one of the best damage souls in the game.

And then heroine Shanoa could collect the Fulgur glyphs in Castlevania: Order of Ecclesia which, again, would unleash lightning damage. Fulgur could create ball lightning that would travel slowly in front of Shanoa, whole Vol Fulgur was the more traditional arc lightning effect from Agunea Of note, Shanoa could perform the Union Fulgur would would call down a bolt of lightning to the heroine, and a ball of lightning would remain above her head for some time. She could also combine Fulgur with any weapon glyph to create a powerful lightning spear attack. A lot of fun could be had with the lightning spells in the game.