The universe is in danger, and only two heroes are up to the task of saving it: Konami Man and Konami Woman. Aided by friends they'll meet along the way, these great heroes will be tasked with taking on the evil Waruda and saving the world (nay, the universe) from his evil!

Back in the day Konami Wai Wai World was a bit of a novelty, especially before big company crossover games became the norm. Of course now, with games series like Super Smash Bros. the thought of a bunch of game characters crossing over to fight and save the world isn't so special. Still, for an NES game, there's something charming about how weird Konami Wai Wai World is.

And make no mistake, Wai Wai is a strange little game. As noted, Konami Man and Konami Woman have to gather friends and take on Waruda. To do this they venture to various stages themed around other Koanmi games to rescue the heroes of those games. So, for instance (since this is a Castlevania site, the Konamis travel to Dracula's Castle to resuce Simon Belmont III). But it's not just some of the well known Konami games (at least to Japanese audiences) -- there are some odd deep cuts as well, such as King Kong from King Kong II and Mikey from The Goonies (which was Japan exclusive -- the sequel was the only game in the series that came to U.S. consoles). These were games Konami produced, but they were licensed, not original IP. 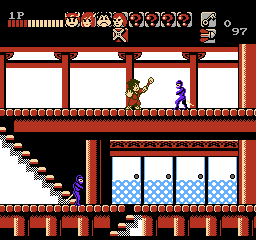 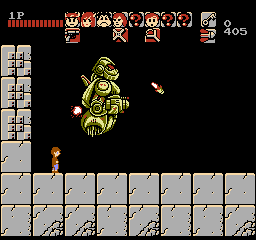 Despite the various series that came in to Wai Wai, though, the games it played most like were the Castlevania series. Obviously, due to the limitations of the NES hardware (and storage space on cartridges), the producers had to trim down the number of play-styles. Instead of the top-down perspective of King Kong or the wide, side-scrolling brawler action of the Goemon/Mystical Ninja series (despite also featureing the hero of those games, Goemon), every one of the main stages in the game (and the last level) are flat side-scrollers any Castlevania fan would recognize, right down to the finicky staircases and bottomles pits.

Much like a Castlevania game, too, this game is devilishly hard. Old-school hard, and then some. Of course there the aforementioned pits, but there's also a ludicrous amount of enemies, one that respawn instantly if the screen scrolls even a little past their spawn point. Many of the fire projectiles too, and then constantly pouring forth (at times no matter how many are killed), making some levels a struggle just to clear them. And for some reason the programmers design the camera exceedingly poorly, cauing the screen to scroll only when the heroes are near the edge (instead of in the middle) -- enemies appear with little time to react to them, only making it more likely that the heroes will get hit. Often.

You'll probably get used to the funky mechanics and the constant barrage of enemies -- you'll have to if you want to spend any time playing the game. The stages are really long, and you'll have to explore all over every stage if you want to unlock all the bonuses and get all the various heroes' unlockable sub-weapons (like Simon Belmont III's holy cross or King Kong's pile of... well, we think it's supposed to be bananas, but when he throw it, the weapon just looks like a pile of feces). Once you beat the boss of the stage you still aren't done, either, because the game leave you in the stage ad you'll usually have to walk all the way back. So you'll see most of these stages over and over again. And die in them, likely, over and over again. 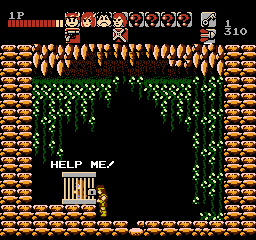 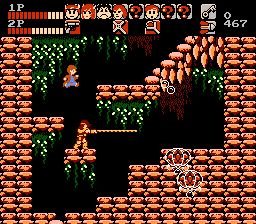 To make matters worse, each of the characters has their own specific song that plays when you use them. Sure, that sounds great, except there is no "default" stage theme, and the songs for each character don't change based on the stage you're in either, so you'll end up hearing the same loop of track as long as you use one of the characters -- and some characters are more useful than others, so you'll hear those songs a lot.

It's worth noting that the game does try to balance out the difficultyat least by supplying plenty of health refreshes. Enemies can drop small or large health orbs/hearts (along with ammo drops for use with each hero's sub-weapon, so there's a fairly regular supply of energy coming to the players. Plus, each hero has their own health bar, so players can burn through a lot of energy before the heroes start dying. Even still, a skilled player will end up cutting it pretty close with their energy supplies. An unskilled player will see their characters die. A lot.

Something to be thankful for, then, is the fact that game doesn't actually have lives. If a hero dies, they can be revied in the hub area, although that revive costs 100 ammo. If all the heroes die, you'll get penalized by losing half your ammo. Konami Man and Konami Woman will revive, but you'll have to spend ammo getting the rest back (and you'll need them all for the later stages), which can be a pain in the ass if you have to spend time farming for drops. 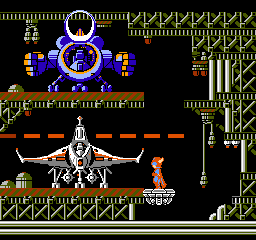 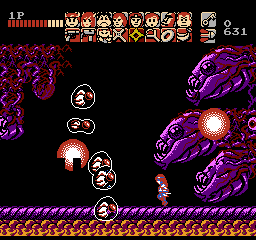 And then we come the last section of the game. Once the heroes have all been collected, all the special powers and bonuses have been unlocked, the heroes can then jump into one of two ships (the Vic Viper of Gradius fame) or the TwinBee (from, of course, TwinBee)and pilot them through a top-down shooter section. If you make it through that, you then get to fight through the last side-scrolling stage and, should you beat the boss, you then have a very short timer (quickly counting down) to walk all the way back through that level or it blows up, taking you with it. Lose, and you get to revive all your heroes (one at a time and for a cost, of course) and do the whole thing over agan starting with the shooter section. It's really tedious and incredibly mean.

It's hard to say, then, if it's worth playing Konami Wai Wai World. Certainly for U.S. players the only way they'll experience the game is through emulation -- there's been no official port of the game to Western consoles at all (not even through the Nintendo eShop). That means we can't encourage playing the game unless you're in Japan (for legal reasons, of course). Even if you could somehow track down a copy (via importing), you have to decide if it's really worth it. Sure, the game is amusing to tool around in for a little while just to see how everything works and laugh at the weird cross-over of all these games. But then you actually have to play it, and playing it is the worst part of the game. Konami fans (and sadists) might like it, but everyone else should probably avoid putting in the effort.

Like a number of early Konami games, Konami Wai Wai World eventually saw a rerelease (in Japan only) for cellphones. Released in 2006, the game is functionally the same as the original version (just for a smaller screen), with two notable exceptions: since the licenses for both The Goonies and King Kong Lives had run out by then, those characters had to be swapped. In their place were Upa (from Bio Miracle Bokutte Upa) and Pentarou (from Antarctic Adventure), respectively. They did play the same as the original versions of the characters, so it's just a cosmetic change more than anything. Still, as this was Japan-exclusive (and for cellphones, no less) finding a copy that's somehow playable her in the West is all but impossible.