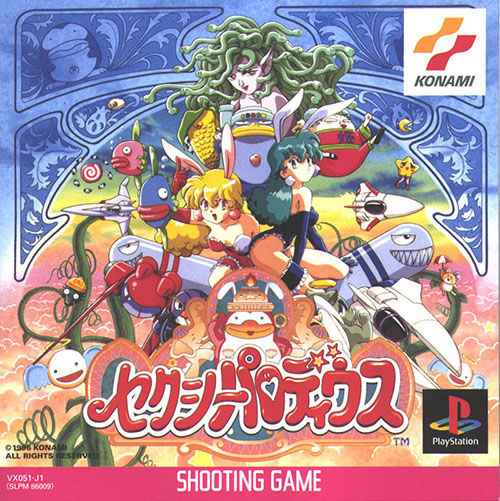 With the Parodius series, Konami had a solid hit on their hands. The blend of campy humor alongside traditional hard-as-nails ship shooting ("shmups", as they're called), led to solid sales and a lot of happy fans. It felt like a series unlike any others just due to its presentation and style, all built on the successful backs of the Gradius and Twin Bee series before it. This was what the fans craved.

However, after the back-to-back-to-back releases of Gokujo Parodius, Jikkyo Oshaberi Parodius, and then Sexy Parodius, one year after the next, it was pretty clear that the series was starting to run out of steam. It wasn't that the game play was bad or that there weren't solid ideas left in the franchise. It was more that there's only so much you can do with cartoon characters shooting other cartoon characters in silly ways before the series became stale and staid.

That's the issue facing the third of these back-to-back titles (and the fifth in the series overall), Sexy Parodius. After the previous game had avoided arcades, releasing only on home consoles, one would have expected that a return to arcade form would have precipitated a big new revolution for the series. Instead we get another solid entry in the franchise that doesn't really have a lot of big new things to add to the series. You fly around, collect items, shoot giant monsters, and get renditions of public domain tracks. Despite some attempts at innovation here it's hard not to feel like you've seen it all before.

For this fifth title the story is that the Parodius characters have opened an agency. That agency specializes in solving the problems of its clients, and the clients have problems only the Parodius team can handle. Big problems. Giant, silly monster problems. The team then goes out on missions, fighting all the enemies while attempting not to die, all before the mission is over and the points are tallied. If the team did a good job they move onto the next mission. If they fail they have to make up for it on the next go-round. 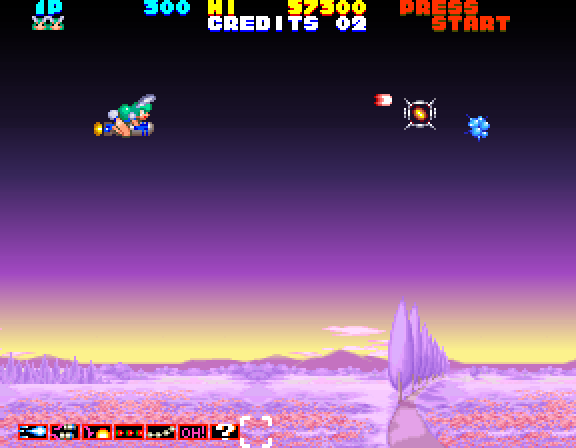 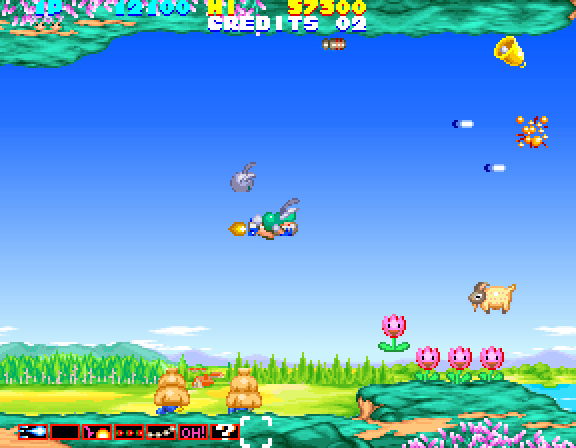 The basics of the game are what you remember from past titles in the series (or, basically, any Konami shmup up to that point). The player ships (from a selection of Vic Viper/Lord British, Michael/Gabriel, Hikaru/Akane, Ivan/Toby, Mambo/Samba, Koitsu/Aitsu, Option/Multiple, and Shooting Star/Black Viper) fly across the screen left to right, on auto-scrolling stages. Enemies will come in and attempt to kill the players, but shooting them (sometimes repeatedly) will kill the enemies. Projectiles, though, must be avoided. As you fly you'll collect power-ups that will increase the level on your bar. You can select the level at any time to upgrade your ship. Get more powerful, kill everything, and try not to die or you'll come back in as a weak ship and have to power up again.

The big difference this time around is that the missions come with branching paths. Certain missions will have objectives for you to complete -- shoot sexy bunny girls, save sexy girls, collect coins, kill mice, etc. -- and if you successfully meet that goal then you'll move on to one version of the next mission. Fail, though, and you'll be sent to a different mission next. The branching paths of the game, then, provides a lot of replay value since you'll have to work to see all the stages, and bosses, the game has within it.

Of course, that assumes you're good enough (or had enough quarters) to get through the game. The early stages of the title are forgiving enough, letting you have a couple of zones to get warmed up. But at a certainly point the bullets will start flying and your chances of getting through a stage unscathed drastically decrease. Of course, the issue there is that when you come in you have a basic, unpowered ship and you're more likely to die again soon after. This leads to a aggravating loop of death until you run out of lives. Rote memorization alone won't save you in a bullet-hell game such as this.

As far as the modus operandi of the title -- the "sexy" part of the game -- I wouldn't say it's all that special. Yes there are a few more anime girls than in previous games, and sure there's the occasional butt shot from a large boss. But then this is a game series that already thrived on a bit of adult humor mixed into the silliness so it didn't feel all that overt or special. It sells itself on sexiness but it's not really a big part of it. The game is more silly than sexy, and the series has already proven itself more than capable of that. 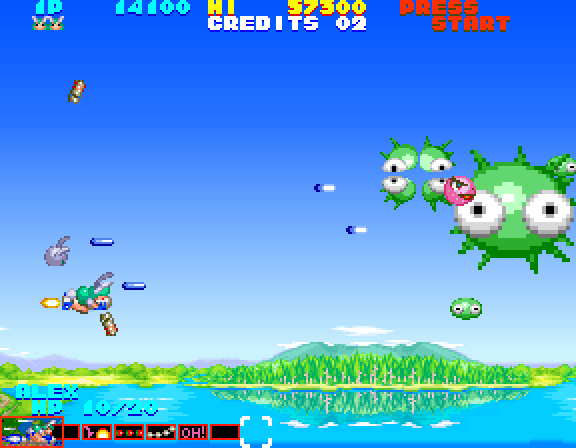 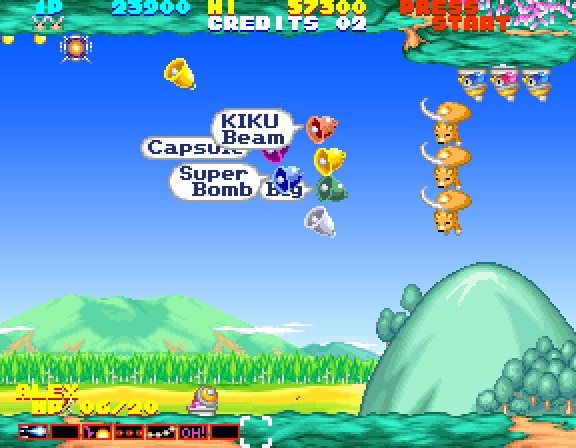 For the Castlevania side of things, this game features far less content to entertain the vampire hunters in the crowd than previous titles. Dracula-kun / Kid Dracula is missing from this title, and the only real content from the Castlevania series is an optional stage. If you don't collect enough coins in the previous mission you'll get sent to Dracula's Castle for the third mission. There you'll fly through the ruins outside before going into a cavernous version of the interior, all before battling a giant version of Medusa (with snakes that shoot bullets and Medusa firing her eye beams). It's an okay stage, but it hardly feels like a solid translation of the Castle. Hell, your goal here it to kill mice, not, like, bats or something. It's very weird.

Overall I did think the game was fun. The branching paths made it feel a little more interesting than the previous iteration in the series, but that still wasn't enough to tally shake the feeling I've seen this title before. It was fine, but not that great, and I can kind of see why this was the last official shooter in the series. It was time to let the pilots hang up their hats for a while.