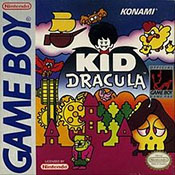 Originally the humorous adventures of the littlest Dracula never made it stateside. In his first adventure, Demon Castle Special: I'm Kid Dracula, our hero (probably Alucard, since his father is master of the castle, and since it's Dracula's castle, it would presubly be actual Dracula, meaning Kid Dracula would be Alucard) fought his way to the lair of the evil lizard lord Galamoth. There he bested his nemesis and came back victorious as the biggest bad-ass in the land.

Come three years later and Konami takes a second stab at the Kid Dracula series, a semi-sequel for the Game Boy called, simply Kid Dracula. As much a remake (many of the levels are the same, and others reuse elements and bosses from the first game) as a sequel (the events of the first game are referenced, and Kid Dracula mentions that he forgot how to use the powers he gained the first time around), Kid Dracula tries to split the difference between giving Castlevania fans in the U.S. their first taste of this humorous game while, at the same time, giving fans in Japan something at least new enough for them to come back a second time.

Thankfully, Konami managed to split the difference perfectly, giving fans, old and new, a game worthy of their interest. Kid Dracula proves entertaining and fun, arguably even more so than it's first version.

Like the first game, Kid Dracula has to play through a variety of platforming levels all with the end goal of reaching Galamoth. To hid aid he'll have a variety of various vampire powers at his disposal: bomb shot, bat transformation, upside-down walking. Added to the mix is the bat shot (which makes a short, curving stream of bats) and his father's umbrella (which acts as a shield). While these powers are arguably more or less as powerful as they were in the first game (this reviewer largely relied on the bat power for most situations), there are a few puzzles that make switching up powers essential, helping the vary the platforming.

Additionally, many of the more interesting levels from the first game make a reappearance. The highlights are the rollercoaster and space elevator levels, both of which provide a very different platforming experience from the bulk of the game. That said, both of those levels, as well as the general platforming throughout the game, seems to have been made easier -- the action-oriented levels move more slowly, which there are just less "gotcha" enemy placements in the game, over all giving this game a more relaxed, easier feel. Those looking for the challenge of the first game might be disappointed in this sequel, but for players like myself that struggled with this first game, this title provided a more even, more fair challenge over all, which was appreciated.

Sadly, some of the best moments from the first game were removed. Some bosses are missing altogether (like the evil pharoah boss who, while hard, was at least amusing to look at), and the whole quiz section with the STatue of Liberty is gone completely (without any replacement). This ends up having the effect of removing much of the humor from the later half of the game, making the whole affair a good deal less silly than it was the first time around. While still a fun, funny experiene, the frther the game goes along, the less it's a "parody" and more just platformer in its own right.

While the humor may be ,ore muted, the graphics have been given room to breathe and shine. Three years is a long time in the life of a system, and by this point Konami had figured out many of the kinks in the Game Boy architechture. The game is richly detailed, with lovely backgrounds as well as cute little animations for the character. One touch I especially appreciated was that every time you reach the end section of a stage, Kid Dracula pulls his cae over himself and does a little grin. It's a silly bit, one I didn't remember from the first game, and it always made me smile every time. It felt like many of these graphic details were omitted from the first game because Konami was still learning the ropes of Nintendo's systems. By this time, with Kid Dracula they knew more, and could do a lot more detail work to make the game world feel lived in.

That said, it's probably easy to assume that the challenge in many sections was brought down due to the limits of the Game Boy. The aforementioned rollercoaster and space elevator sections are probably slower because the Game Boy struggled to to render them any faster. Similarly, the enemy count was probably brought down, and the over all challenge made easier, to avoid game slowdown. The first game seemed to struggle sometimes, but this iteration move smoothly -- likely because they limited the scope of the challenge.

Whether all this is good or bad is more an opinion for the individual player, though. As mentioned above, I appreciated the lowered, more even challenge -- when I died, I knew it was my fault and I just had to get better and I couldn't blame slowdown, cheap placement, or anything else. Plus, now I was able to enjoy how good the game looked on the black and white system. For me, this was the superior way to make the game.

You mileage for the Kid Dracula games may vary, and depending on the kind of game you're looking for, you may prefer the first title over the second. For us, though, Kid Dracula is the way to go to experience one of the titles in the series. It looks better, it plays better, and overall provides a better package for players new and old. Plus, as a bonus, the game was released in the United States, so for gamers on this side of the pond, actually finding a copy of the title is much easier (no need to use emulation and a fans translation) -- playing the game legally, for our money, is ideal.

For our money, you owe it to yourself to play a title from this little Castevania side-series, and if you're going to do it, go with Kid Dracula over Demon Castle Special: I'm Kid Dracula. It's the better game in every way that matters.