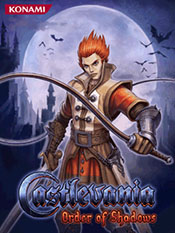 Featuring a new Belmont to the series, Desmond, Castlevania: Order of Shadows is only the second Castlevania game released for cellphones (the original game having been ported to AT&T phones in 2004), and the first original title to be developed for the hand-held systems.

Arriving at a dark and sinister mansion, Desmond (accompanied by his two sisters, Zoe and Dolores, who help to move the plot forward), is there to defeat the evil Lord Rohan Krause, leader of the "Order of Shadows". Krause killed Desmond's parents sometime earlier, and along with going to the mansion because that's what heroes do, Desmond is also there to seek revenge for the deaths. What he'll find is a short, linear quest to defeat the vampire... and possibly a bigger threat as well.

The game, being developed for a variety of cellphones (and before the iPhone and its ilk became ubiquitous), uses the face keys of the phone for controls. As can be expected, the game is, at times, quite limited by the responsiveness of the keys. Depending on the quality of your phone, your experience may vary, but expect difficulty playing with the face buttons and actually getting the game to respond as well (or as quickly) as you'd like. This is compounded by slow-down, which on some phones was quite prevalent (testers at the Inverted Dungeon experienced infrequent slow-down/stutters, and it wasn't just because they were off their meds). 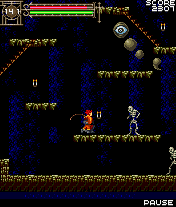 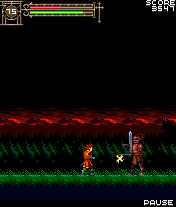 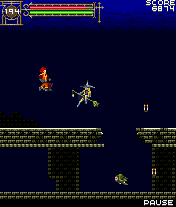 A nod towards more recent games was made, with collectable weapons, sub-weapons, and an experience system. Your character can get up to level 10 -- low by Castlevania standards, but even by level 5 or 6, your character will be so god-like, the last few levels are unnecessary. And while the variety of sub-weapons is nice (any sub-weapon you collect you can keep), most of the time your basic whip will do the trick for you -- the game is already easy enough that you don't need to rely on your sub-weapons to save the day.

Surprisingly, the music for the game is top-notch (especially taking the potential limitations of the systems into account). The game features an original soundtrack featuring new tunes befitting of the Castlevania series -- there's even a remix of "Bloody Tears" included. Additionally, once the game is completed, a "Classic Music" mode is added, allowing you to listen to classic NES tracks while playing the game. 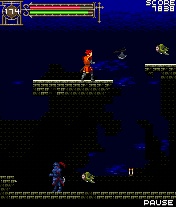 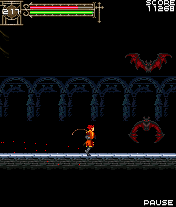 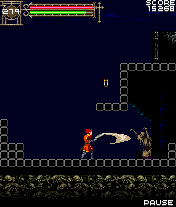 Unfortunately, for all the polish to the game's sound, the graphics just aren't as good. Although not as bad as NES-style graphics, the game is no where near as pretty as the SNES-era games. Characters in the game aren't well drawn and seem weirdly proportioned. It's truly distracting, and I found it harder to enjoy the game.

It's hard to call this a "good" game. For a cellphone, back in the day, it was a decent release, but it already seemed aged at the time of publication (even the third iteration of the original Castlevania for mobile phones looks better). If you want a short distraction, you could do worse than Order of Shadows (for our money, this game is still more interesting than Angry Birds), but that's not exactly high praise either.