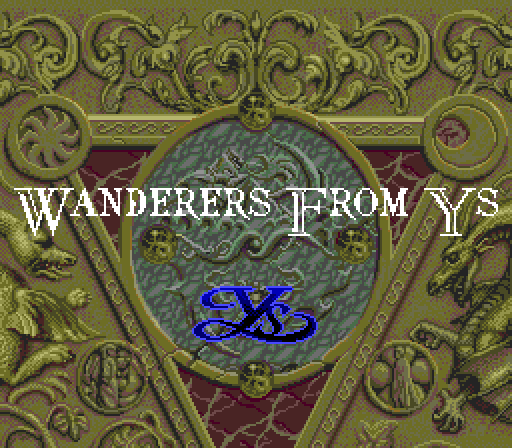 For Nihon Falcom, the Ys series is one of their premiere, flagship franchises, right up there with the Dragon Slayer series. Not that you'd be easily able to tell that in the West. For the longest time the series was something of a unknown, with ports of games to less popular consoles. Even then only half of the early games in the series made it to Western shores, meaning whole chunks of the storyline were missing for audiences abroad. It made for a confusing experience for anyone outside of Japan attempting to track down the games to experience the full scope of the series.

Interestingly it was Wanderers from Ys (aka Ys III, titled Īsu Suri – Wandarazu Furomu Isu in Japan) that had the largest reach in the West. This title saw releases on all three 16-bit consoles -- the Genesis, SNES, and TurboGraphix -- allowing any burgeoning fans to pick up the series and check it out. Of course, if you were lucky enough to have a Master System you could have played the first Ys game, and if you had the Turbo Duo then Ys I & II came with your console. For many, though, Wanders from Ys was their first real taste of the series and, well, it was an odd one to be sure.

The thing about Ys III is that it didn't really play like any of the previous (or later) games in the series. The first two titles (which saw wide release across the various Japanese cartridge-running PC consoles) were top down action-RPGs. They featured the classic Falcom combat style (i.e., smacking your face into enemies) that was also featured in many of the Dragon Slayer games). The expansive, open worlds of those games required the players to explore the various nooks and crannies, diving deep into intricate dungeons, all to complete long and interesting quests. Ys III, though, ditches much of that making it quite the oddball came in the series.

Instead of a top-down experience, Wanderers from Ys puts series hero Adol in a side-scrolling perspective. While the menus and equipment screens might look the same as previous titles (carrying over some of the core concepts), this game goes in hard on platforming over exploration. It's kind of a Metroidvania in that respect, a concept Falcom had been toying with in their Dragon Slayer series as well. It's possible the company saw this as a way of unifying their play styles, making all their games into more side-viewed Metroidvania-lite style games. In the case of Ys III, though, the experiment was a bit of a failure.

To start with, the combat in Wanderers from Ys simply doesn't work. Adol doesn't just smack into enemies with his face but, instead, has to swing his sword. This is similar mechanically to Romancia, another Falcom title, and it also carries the same issue: the heroes sword is two small and dinky to really work. Adol's tiny sword forces him to get in close, swinging it madly while enemies lurk quickly towards him. While he can't smack into the enemies to do damage, the enemies have no such limitation, and they'll do a lot of damage (even when Adol is leveled up and wearing great armor), quickly draining his health.

It feels like Falcom really wanted their players to fight up close but that forces a lack of balance into the game. A larger weapon (something with the distance of the Vampire Killer in Castlevania II: Simon's Quest) would have taken out much of the needless damage tanking. That, or Falcom could have given Adol more combat mechanics to even the playing field. He can down stab and up stab, a la Link in Zelda II, but, unlike Link, Adol doesn't have any bounce when he jack-hammers into an enemy, meaning if he doesn't instantly kill the foe he's going to take contact damage regardless. It's obnoxious.

Making matters worst is the fact that Adol only has so many ways to heal himself of all this needless damage. He can take one healing herb with him to refill is health once and then, much later in the game, he'll get a ring that can slowly heal his energy by draining his limited ring points, and that's it. If you can't survive a battle with those few healing options (bearing in mind that your ring points also need to be used for buffing you in combat) then you're pretty much screwed.

Depending on which version of the game you played this might have seemed like a true no-win experience. The SNES version, for instance, had some of the most imbalanced boss fights among the ports, with the end villain notably having over-powered, undodgable attacks that never left him open for retaliation. The Genesis edition, by contrast, was considered the most balanced version of the game, although even the Turbo Duo version was far more playable than the mess released on the SNES. Still, players would have to save frequently, especially before bosses, and try, try, try again just for a chance of clearing the title. 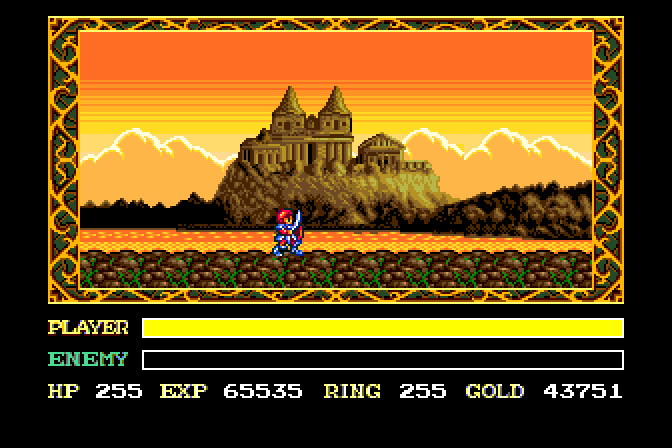 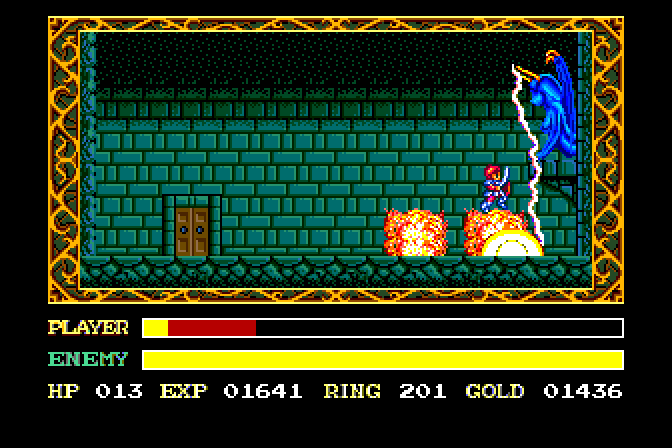 Outside of combat it's hard to say the experience was really worth all the effort. The game is fairly linear, with shallow dungeons featuring little in the way of exploration. If you'd been able to play either of the previous two titles then the exploration of Ys III would seem pathetically shallow by comparison. This is a game that, even factoring in grinding, you can complete in two hours (and that's if you want to see and collect everything). For a game with the basic trappings of a Metroidvania title, Wanderers from Ys doesn't really seem to understand the full experience of the genre. It's too simple, too repetitive, and too basic to really work with the style of game play it flirts around.

That's not to say that everything about the game was bad. The graphics, even on the older versions of the game, were pretty crisp and bright, and they truly sang on the "remastered" version on the Turbo Duo. The music really is great in this title (again, especially on the CD quality Turbo Duo), and it's clear a lot of love went into the presentation of this game. That just wasn't matched by the actual game play within the package, sadly.

It's pretty clear Falcom knew the game wasn't a real winner since, after this title, the series reverted back to its more traditional roots. Ys IV reverted back to the top-down perspective, with bonking combat, and even as the series evolved over time (3D graphics and worlds, more active combat slowly reintroduced) it never really followed the path set by this third title. And that's good because this was not the way forward for the series. Playing it reveals that.

In basic style Wanderers from Ys flirts with the same game play concepts as other early experiments in the Metroidvania genre. I'd consider it a couple of steps removed from what Konami attempted with Simon's Quest or Nintendo's experiment in Zelda II. It feels like Falcom's own continuing exploration of the ideas from Romancia with maybe even less grace. It's s less interesting version of those games, but with very pretty graphics.

It's not that it's a truly bad game it just doesn't go far enough with the burgeoning Metroidvania style to really stand out. It came out two years after Simon's Quest but didn't really learn the lessons of that title, and then other, better games would quickly come along (like Enix's Actraiser) to show how you could blend game play ideas in a side-scrolling perspective to much greater effect. Falcom's experiment with the genre here suffered from poor timing and a dearth of ideas.