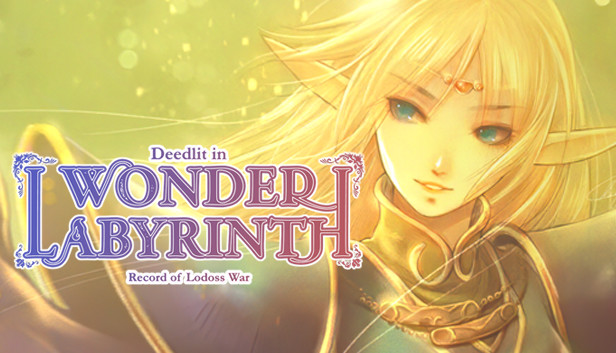 The whole of the Metroidvania genre has absolutely exploded in the last few years. Ever since Konami essentially got out of the game, producing the Castlevania: Lords of Shadow sub-series before all but abandoning the property entirely, other developers have come along to put their spin on the formula. All of the, to a greater or lesser extent, owe a debt to Koji "IGA" Igarashi's magnum opus Castlevania: Symphony of the Night, and some of them certainly wear that influence of their sleeves.

Record of Lodoss War: Deedlit in Wonder Labyrinth is one of the more overt Symphony clones, although that's not necessarily a bad thing. Certainly the game absolute reeks of all those fine, lovely touches that made Symphony of the Night such a masterpiece. The game doesn't super original, but what it does it does very well, and that is taking the best elements of Symphony of the Night and distilling it down into a fun, beautiful, lithe game.

In the game players take on the role of Deedlit, a heroine from the Record of Lodoss War manga and anime. In the events leading up to our story Deedlit lost her lover, Parn, and is stuck in a cycle of grief. Somehow she ends up in the Wonder Labyrinth, a place she can't seem to escape filled with monsters and magic. Deedlit has to find her way out of the dungeon, fighting through six zones, all before confronting her grief, and the monsters responsible for dragging her into the Wonder Labyrinth, so she can escape back to her own time and place.

Players of the game have been mixed about just how good Deedlit in Wonder Labyrinth really is. As far as a game associated with the Record of Lodoss War series, I can't really speak about how well it ties into the series as not only am I not familiar with the property (beyond recognizing the name) but I also don't read manga or watch anime. I will say that the story of grief, fighting, and more grief was certainly affecting, as much as can be told in a Metroidvania game, but I don't know if it really holds a candle to what someone might be expecting from something associated with the long running Japanese property. 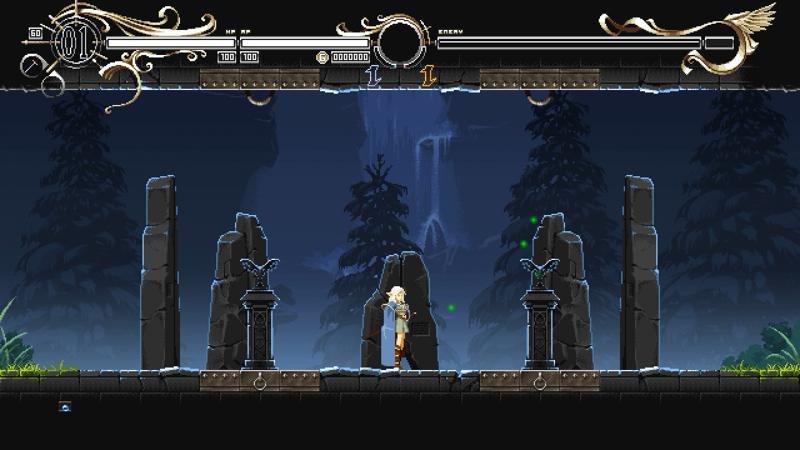 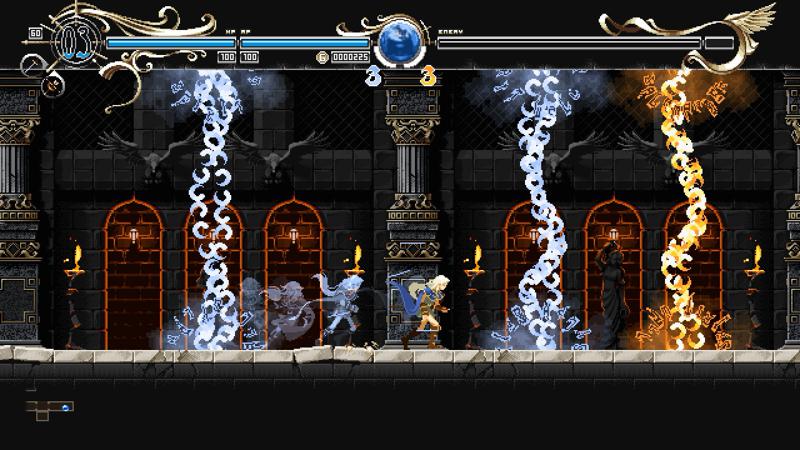 In fact, instead of providing one large castle that the heroine will end up crossing back and forth through, time and again, Deedlit in Wonder Labyrinth instead sections the game into six zones, each a fully encompassed territory with a beginning, middle, and end. In this regard you could think of the zones like the paintings in Castlevania: Portrait of Run, except there's no "hub world" castle linking them together. When you finish one stage you move on to the next, and the only way to cross back and forth across zones is to use special portals to warp between. It's a curious decision that leaves the zones feeling a little more disconnected than any of the areas in, say, your usual Castlevania fare, but it doesn't really hurt the overall layout that much.

There is still plenty to explore, and lots of hidden items -- health ups, magic ups, boosts to your magic elements, along with weapons to collect with a variety of use-types -- but in comparison to some Metroidvania titles, Deedlit in Wonder Labyrinth does feel more linear with less emphasis on re-exploring zones and searching for every hidden item. In fact, the de-emphasis on exploration, coupled with an RPG leveling system that doesn't really seem to boost the heroine overly much, makes this game feel more more like a traditional platformer than the exploration heavy games players might be used to.

But while there are some flaws in the game, there is also a lot to like. The magic system, for starters, is robust. There are plenty of spells to pick up, with a number of use cases, all of which can help to make Deedlit a very powerful Elf by the end of the game. Her weapon selection, too, quickly makes her into a tanky heroine, capable of taking of bosses in a matter of seconds. Fights are fast and furious, but if you know what you're doing, your chunky heroine will handy all the fights with aplomb. 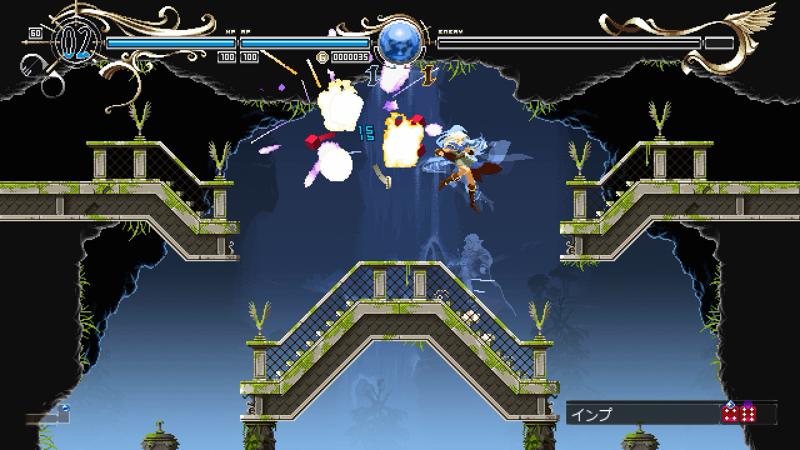 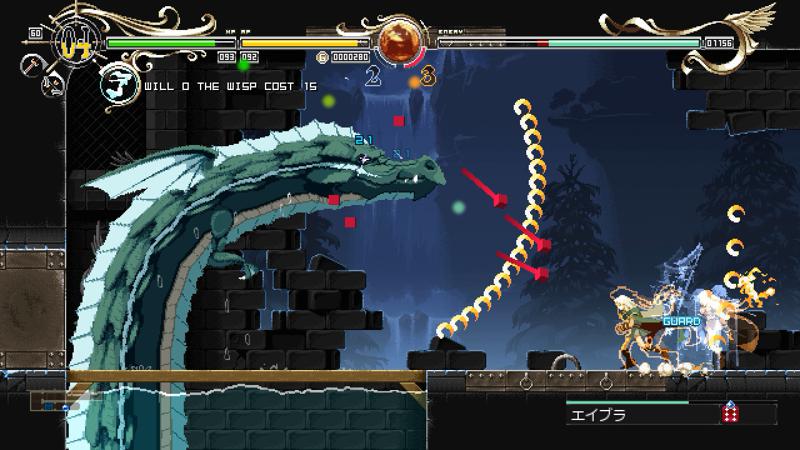 And the game is absolutely stunning to look at. Deedlit in Wonder Labyrinth features gorgeous pixel artwork that evokes the Castlevania feel of the IGA era (especially with the heroine). This is a game that you can sit back and watch as someone else plays it and you feel like you get a rich experience, not only from the pretty graphics but also from the lovely soundtrack. This game has style pouring out of it and it's an absolute treat to behold.

It also plays really well from a practical standpoint. The controls are silky-smooth and you never really feel like Deedlit gets out of control. Yes, there are moments where you can get juggled, and there's a few curious instances where it seems like Deedlit's damage invincibility gets a tad janky, leading to combo damage you don't think you should really take, but those moments are few and far between. Far more often you are in full control of your heroine as you plow through this short, but lovely, title.

Record of Lodoss War: Deedlit in Wonder Labyrinth is not a perfect game, and it's twenty buck launch price may be a bit high for some players considering the length of the game (a casual play-through that doesn't try to collect everything could be over in as little as two hours), but once this game goes on sale, and maybe has a few of its bugs patched out, it'll be a fine game for any Metroidvania fan to play to while away an afternoon.

As noted, this game bears a striking resemblance to the Castlevania titles of the IGA era. Symphony of the Night is the most obvious template, with Deedlit in particular looking a lot like Alucard in her dress and manner as well as in the special effects she leaves behind while moving. Plenty of monsters seem to be drawn (and designed) from the same sources that Castlevania used, and everything feels very of-a-piece with the games we're all familiar with.

And, yes, the different zones seem to take the concept of the paintings from Portrait of Ruin. I kept expecting a hub castle to show up as I traversed through each stage of the game, but one never arrived. These zones would have been perfectly at home attached to sections of Castle Dracula, in form and function.

The game is, in short, a very direct Castlevania clone. It does it well, but it's not at all original about it, frankly.